Maryland’s congressional Democrats were divided over whether to support a Senate measure to temporarily fund the federal government and end the government shutdown.

Two Democrats from the state’s House delegation – Reps. John K. Delaney and C.A. Dutch Ruppersburger – joined Maryland’s lone Republican, Andrew P. Harris, in voting for the bill, which passed 266-150 on Monday evening. Only 45 Democrats supported the measure, which had the support of all but six Republicans. 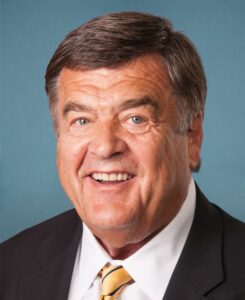 Maryland Sens. Benjamin L. Cardin and Chris Van Hollen, both Democrats, voted for the measure, which re-starts government operations after a three-day shutdown, and funds health insurance for low-income children for six years. They did so with a promise from Senate Majority Leader Mitch McConnell (R-Ky.) to bring an immigration measure to the floor in the coming weeks.

“Funding the government by continuing resolution is not a responsible way to govern,” Hoyer said in a statement. “I implore Republicans to come to the table and negotiate with Democrats to address important issues facing Marylanders, including setting funding levels for the current fiscal year and protecting DREAMers. I hope that Congressional leaders will use the next three weeks to come together and find consensus on the issues on which we agree.”

In a statement, Raskin said: “I don’t know precisely what promises have been made in the Senate, but in the House, there have been no promises made to us to pass a real budget for the American people—much less to provide long-term funding for America’s community health centers or to resolve the situation of the 800,000 DREAMers who are twisting in the wind as the GOP leadership plays political games.”

Progressive groups have hammered Senate Democrats for agreeing to the short-term funding measure, accusing them of abandoning their commitment to force action on Dreamers, whose status expires March 5 – particularly given the level of mistrust of McConnell, the wily Republican leader, and the mixed signals coming from the White House.

Early headlines have not been favorable for Democrats, with Politico reporting that the party “got rolled in (the) shutdown standoff.” The progressive website Think Progress ran an analysis piece titled, “This is what happens when you trust Mitch McConnell.”

Van Hollen defended his vote, saying in a statement: “We now finally have the commitment we needed from our Republican colleagues to address key national priorities on a long-term budget deal, (including) funding for our community health centers, combating the opioid epidemic and a promise for a vote on a bipartisan bill to help the Dreamers. This is something Republican leadership refused to do before today.”

“With the new commitments,” Van Hollen said, “we were able to find agreement to reopen the federal government – something that is (of) paramount importance to millions of Americans across the country, including our dedicated federal workforce here in Maryland.”

As head of the Democratic Senatorial Campaign Committee, it is Van Hollen’s job to help colleagues facing reelection this fall, including several in states Trump won handily, and recruit and fund challengers in states now held by Republicans.

Over the weekend there were concerns among some Democrats that holding up government funding because of immigration concerns could be a tough sell in many red states. All of the potentially vulnerable Democratic senators up for reelection, with the exception of Montana Sen. Jon Tester, voted for the stop-gap funding bill on Monday.