Gov. Larry Hogan (R) rarely misses an opportunity to talk about the “mess” he claims to have inherited when he took office, to seize the mantle of bipartisanship, or to accuse Democratic legislative leaders of mucking up government through partisanship or incompetence.

On Thursday, the governor said an amicus brief would be filed in support of the plaintiffs in Benisek v. Lamone now before the U.S. Supreme Court (the case involves redistricting in Maryland’s 6th Congressional District). Hogan called the state’s congressional map  “shameful,” the result of an “arrogant” pursuit of maximum Democratic seats, in his view [see related story].

During the announcement, the governor was asked about another 2018 priority — term limits for state legislators. Wouldn’t term limits result in a brain drain from Annapolis? a reporter asked.

“Some of the people have been here so long they no longer have institutional knowledge because they can’t remember it,” Hogan said to laughter and applause from the redistricting reform advocates in the audience.

Edwards raised more money from Montgomery County ($31,800) than Prince George’s ($31,506). Part of Montgomery County was in her congressional district when she was first elected, though it was eventually carved out in the last round of redistricting – now the object of the federal case that’s headed to the Supreme Court. 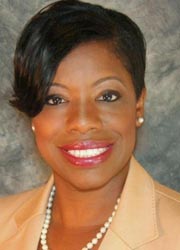 The leading contenders in the Democratic primary to replace Alsobrooks as Prince George’s state’s attorney were close when it came to the amount of money raised in the past year, but one had a distinct advantage in cash on hand.

Check Maryland Matters over the next few days for more analysis of campaign finance reports!