When Deputy U.S. Attorney General Rod Rosenstein took to the stage at a gathering of Maryland business leaders Thursday morning, there were at least a few 800-pound gorillas with him in the room.

He managed to avoid them.

Rosenstein, the former long-serving U.S. attorney for Maryland, is at the fulcrum of many of the hottest controversies in Washington, D.C., these days. But except for joking about his unexpected high profile, he ignored the headlines and instead delivered a speech about “the rule of law.”

“The rule of law is really the foundation of America,” Rosenstein said.

He was speaking to the BWI Business Partnership Inc., a group of businesses in the vicinity of Baltimore-Washington International Thurgood Marshall Airport.

Rosenstein outlined what DOJ is doing to protect U.S. business and consumers from criminals who seek to undermine the economy by stealing data and intellectual property, infiltrating the nation’s cybersecurity, and perpetrating violent crime. 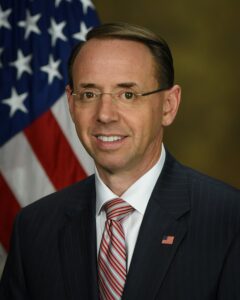 Sprinkling his speech with quotes from Shakespeare, Plato, Sir Thomas More, the book “Who Moved My Cheese?” – and his boss, Attorney General Jeff Sessions – Rosenstein said his job as deputy AG is to smoothly run an agency with 115,000 employees and tens of thousands of contractors. He said it is gratifying to be able to use the skills he learned as a management, finance and marketing major during college.

“I feel like I have more in common with you – CEOs and managers – than with litigators,” he said.

“Is anybody concerned about regulations?” Rosenstein asked during a speech. The audience of 200 business leaders applauded.

Rosenstein said the administration was committed to eliminating “the unnecessary and enduring regulations that can be burdensome to businesses.” He said he was “proud of” President Trump’s order for federal agencies to review all the regulations under their purview.

He said the effort to eliminate burdensome and ineffective regulations is being led within the Justice Department by Associate Attorney General Rachel Brand, who holds the No. 3 position at the agency.

Brand was an attorney at the U.S. Chamber of Commerce for many years, fighting environmental regulations and certain labor and public health rules.

Despite describing himself as a manager, Rosenstein is a career prosecutor who spent a dozen years as U.S. attorney for Maryland before being tapped for the No. 2 job at Justice. His sterling reputation recommended him for the job.

But Rosenstein has since been ensnared in some of the biggest controversies of the Trump administration, including the firing of former FBI director James Comey and hiring a special prosecutor to look into whether the president’s campaign officials colluded with Russia.

Rosenstein did not directly discuss these high-profile storylines at the BWI business breakfast, but did joke about his erroneous prediction to his teenaged daughter that he wasn’t going to attract any media attention as deputy attorney general.

“‘It’s a low-profile job and it’s unlikely to happen,’” he recalled telling his daughter. “So I’ve been proven wrong.”

Gov. Lawrence J. Hogan (R) on Monday tapped a former federal prosecutor – who was part of a national opioid manufacturer’s defense team in…

Rosenstein in Baltimore: ‘Not Everybody Is Happy With My Decisions’

In some of his first public comments after leaving the Justice Department last week, former Deputy U.S. Attorney General Rod Rosenstein said he made…

GOP Wants to Move On, But Dems Aren’t Done With Mueller Report

WASHINGTON — Congressional Republicans and the Trump administration want to move on from Special Counsel Robert Mueller’s investigation, now that a redacted version of…