The committee will forward Washington’s name to Gov. Wes Moore (D), who will have up to 15 days to make the appointment official.

Washington, 39, was the only person who came before the committee to seek the vacant seat. He will serve the remaining four-year term after all 188 legislator seats in both chambers were up in the November election.

“I just want to thank everybody that came her today. I look forward to really working with all of you,” Washington, joined by his wife and their one-month daughter, said to dozens of supporters at the Glenarden Municipal Center.

Washington, who was first appointed to the House in December 2012, represents District 22 in the Hyattsville area. He replaces outgoing Sen. Paul Pinksy (D), who Moore selected to head the Maryland Energy Administration.

Washington stepped down as CASA in Action’s first executive director, which he organized and led various get-out-vote efforts throughout Maryland and other parts of the country.

He’s also known as an education advocate and served four years on the Commission on Innovation and Excellence in Education, which sought to reexamine and reform the state’s public school system. The recommendations from the commission, also called the Kirwan Commission, are part of the multi-billion-dollar Blueprint for Maryland Future’s education reform plan.

“I’ve recognized his character and that’s always stood out to me. That’s important when you’re talking about leadership,” said Joe Fisher, who founded the First Generation College Bound program and spoke on Washington’s behalf. “He’s resilient, honest, he has integrity and he’s passionate for the people. He’s made an impact not only in this district and Prince George’s County, but the entire state.” 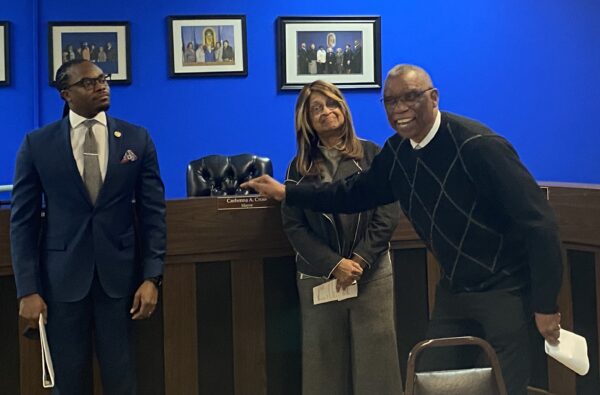 Once Washington’s appointment is finalized, the county’s central committee must schedule another meeting to select a person to replace him in the House of Delegates.

If Washington is appointed, he would tentatively serve on the Judicial Proceedings Committee, filling a vacancy on that panel left by former Sen. Susan Lee (D-Montgomery), a senior member on the committee who Moore appointed as secretary of state.

Washington’s replacement in the House would serve Dels. Nicole Williams (D) and Anne Healey (D), who also represent the district.

Martinez ran in the July primary for the three-delegate district, coming in fourth place by 761 votes behind Healey.

If appointed, he said one of his main priorities would be to ensure the Purple Line light-rail project comes to fruition. The 16-mile rail is at least four years behind schedule slated to connect to four Metro stations and would run between New Carrollton in Prince George’s and Bethesda in Montgomery County.

But just as importantly, he said, he would work collaboratively with County Council, the county executive and municipal leaders in the 22nd District.

Interested candidates have until 5 p.m. Feb. 2 to fill her seat to represent District 16 in the Bethesda area. Letters of support for candidates aren’t due until Feb. 9 and the county’s Democratic Central Committee will hold a special meeting five days later on Feb. 14.

Del. Arianna Kelly (D), who serves as vice chair on the House Health and Government Operations Committee, has expressed interest to replace Lee. If chosen and confirmed by Moore, she would also join the Senate’s Judicial Proceedings Committee.

The county’s central committee would then need to choose a person to fill Kelly’s seat who would work alongside the two District 16 legislators in the House, Dels. Marc Korman (D) and Sara Love (D), who have endorsed Kelly’s bid for the Senate seat.