In his first official act as Maryland governor Thursday morning, Wes Moore continued last year’s work in the General Assembly, releasing $69 million that had been withheld by his predecessor. With the release of the funds, Maryland state agencies will begin work to create a new “green bank,” a medical leave insurance fund and a program to provide abortion care training for more medical professionals.

The actions, Moore said, were “a fundamental shift on how the governor’s office is going to approach the budget and the office’s relationship with the General Assembly.”

“We view the General Assembly as partners, not adversaries, in our collective work and our collective effort that thoughtfully and uses data to invest taxpayer dollars in programs, services and initiatives that will address the most pressing concerns of communities all over the state of Maryland,” the Democrat said.

The $69 million in released funding is all connected to four bills that became law last year after former Gov. Larry Hogan (R) either refused to sign them within a statutory time limit or vetoed them, only to be overridden by the Democratic majority in the General Assembly.

The budget announcement kicked off a series of first-day actions by the Moore administration, which also included the signing of two executive orders (on executive branch employee ethical requirements and the establishment of a Department of Service and Civic Innovation), meetings with the state’s top prosecutors about criminal justice initiatives, and a first public gathering of his Cabinet.

Moore is releasing almost $9.1 million for programs included in the Climate Solutions Now Act of 2022: $3.8 million to establish a state green bank, $3.8 million for grants to install renewable energy equipment at multi-family homes, $1.1 million for the Chesapeake Conservation Corps service program, and $375,000 for the Maryland Healthy Soils program.

The administration is releasing $10 million to the Department of Labor to pay for early start-up costs to implement a paid family and medical leave program, including a $9 million initial allocation for the benefits fund.

“This is about economic justice and economic equity,” Moore said, noting that 60% of working Marylanders lack access to paid family and medical leave. “…No working Marylander should be forced to choose between caring for a loved one or risking unemployment.”

Moore also released $46.5 million related to the Cannabis Reform Act, including $40 million for a Cannabis Business Assistance Fund in the Department of Commerce to support the forthcoming recreational cannabis industry, $5 million for the Cannabis Public Health Fund in the Department of Health, which could be used to fund research on cannabis legalization or for substance abuse treatment, and $1.5 million for the Criminal Justice Information System to comply with provisions of the act, including automatic expungement on July 1 of prior simple possession cases.

Finally, Moore released $3.5 million in Abortion Care Access Act funds, which will fund training for health practitioners besides physicians — such as nurse practitioners, nurse midwives and physician assistants — who are now allowed to provide abortion services in Maryland.

“The dangerous and reckless and unprecedented decision by the Supreme Court to overturn Roe v. Wade upended decades of precedent, legal protections and constitutional rights of women and families in Maryland and also across the country,” Moore said. “Now while we are proud that Maryland has some of the strongest laws in the nation to protect and preserve women’s reproductive rights, our values as a state and as a people require us to do more, especially for women and families in states where safe access to reproductive care has been denied.”

The current year budget announcement comes just before Moore is expected to release his own spending proposal for the next fiscal year on Friday morning, the constitutional deadline.

It’s unclear how much the nascent Moore administration was able to shape the budget plan, which was largely drafted by outgoing Hogan administration officials. The new governor could choose to make changes through supplemental budget bills later this legislative session.

In another change from the Hogan administration, Moore will resume a tradition of the governor hosting a morning breakfast for legislative leaders and members of the legislative budget committees before releasing the spending plan publicly.

Additionally, Moore signed his first two executive orders, one setting ethics standards for state employees under his administration and the second establishing a new Maryland Department of Service and Civic Innovation. Both orders deal with the idea of “service,” a subject that he described as “core to our administration” — and one that he referenced repeatedly on the campaign trail last year.

Moore’s first executive order establishes ethics standards that will be required of employees in the executive branch during his administration, including Moore himself and the lieutenant governor.

Asked later by reporters about his putting his investments, businesses and assets in a blind trust, Moore said he would be doing so, but that it had not yet been completed.

“Doctor King … once said that everyone can be great because everyone can serve,” Moore said. “This department will be the hub of all of our efforts to build a Maryland that serves.”

The new agency would administer the “service year option,” in which high school graduates will be given the chance to serve communities and be paid for their work while learning skills that would prepare them for future jobs.

“Our state needs them involved and engaged now,” he said. “This department will help to foster those types of opportunities.”

He told reporters that his budget, to be released tomorrow, would include funding for the new Department of Service and Civic Innovation.

Moore said he would be appointing a new secretary — a cabinet-level position — to head the department “in the coming days.”

He acknowledged that the new Department of Service and Civic Innovation ultimately would require approval by the General Assembly.

Moore said that he already had talked with Senate President Bill Ferguson (D-Baltimore City) and House Speaker Adrienne A. Jones (D-Baltimore County), and they “expressed excitement” the proposal.

Asked at Thursday morning’s press conference whether he would be announcing the appointment of his transportation secretary, the highest profile Cabinet position yet to be filled, Moore sidestepped the issue.

“We’re very excited about the announcements we’ve made thus far because I think people are saying that we’ve held true to our word … we are not only going be to bringing on the most qualified, the most talented, the most hard-charging group of secretaries this state has seen, but we’re going to have an administration that looks like the state of Maryland,” he said.

“And that also goes for the positions we have not announced yet,” the governor said.

A short time later, at lunchtime, Moore met with his newly appointed cabinet members – and some of the old ones from Governor Hogan’s administration — on the 2nd floor of the State House, along with Tisha S. Edwards, the new governor’s appointments secretary.

Asked about being a holdover, Ports said, “He asked me to stick around, and I am until he appoints someone else.”

He then patted the U.S. Marine eagle and anchor pin on his suit coat lapel.

“Hey, I’m a Marine. I do as I’m told,” he said, laughing. “He was a captain and I was a sergeant. Now he’s the governor and I’m a secretary. He still outranks me.” 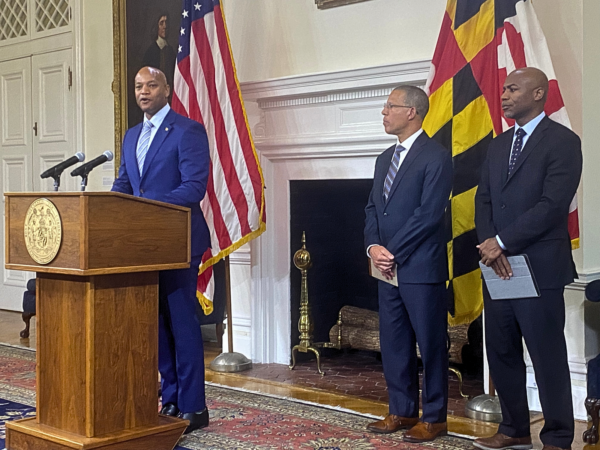 “I want the department to succeed. I want to see him succeed,” he said. “I live here, my family lives here…. We’re here to stay.”

The leaders spoke briefly to the press after the meeting. Asked whether he would propose legislation in targeting violent and repeat offenders, Moore said yes.

“This is very personal to the people of this state; so, we are going to move very aggressively and coordinate to be able to address this issue of removing violent offenders off the street,” Moore said.

This story was updated Jan. 20 to correct a quote from Gov. Wes Moore about his cabinet appointments.