Before the inauguration of Wes Moore to become Maryland’s first Black governor, he participated in a solemn wreath-laying ceremony Wednesday morning at the Annapolis City Dock, where enslaved Africans were once brought ashore. 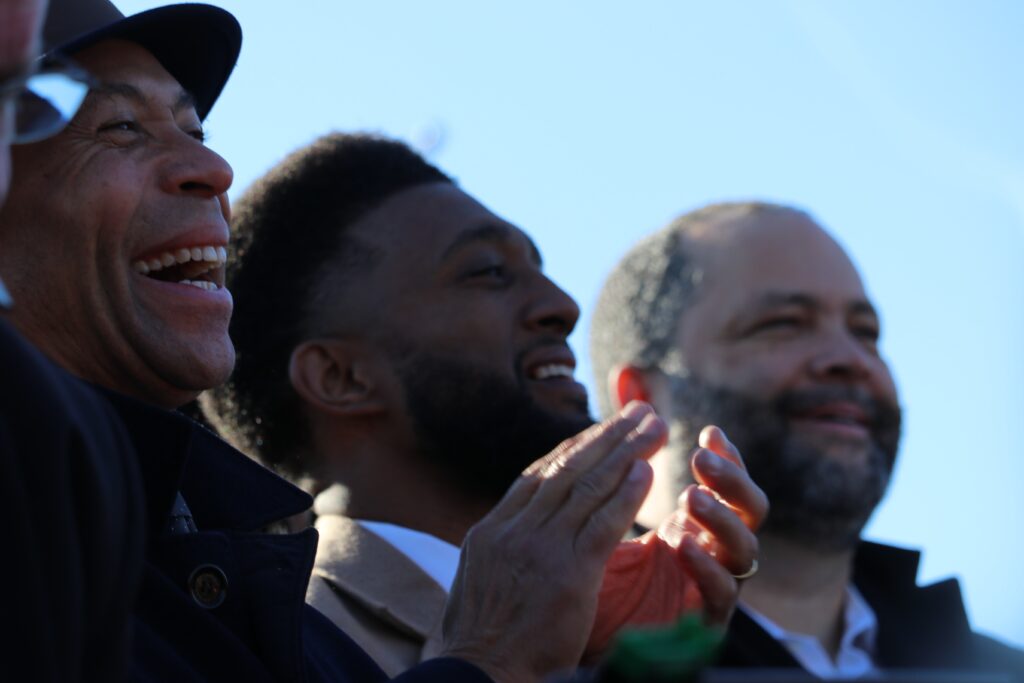 Moore, who will be the only Black governor in the nation, joined several Black leaders to commemorate the history at the city dock, which has been designated as a “site of memory,” honoring those Africans who came to Maryland after crossing the Atlantic during the Middle Passage.

The dock, which also houses a memorial to Kunta Kinte and Alex Haley, who wrote “Roots” about his enslaved ancestor, was cited by the National Trust for Historic Preservation as one of the most endangered historic places for 2018.

The state of Maryland, located south of the Mason-Dixon Line and considered a slave state during the Civil War, now has among the highest number of registered Black voters in the nation.

According to Pew Research, Maryland tied for fourth for the proportion of Black voters, who make up about 32% of registered voters. The state tied for eighth with Illinois for the overall number of Black voters with 1.4 million eligible voters. 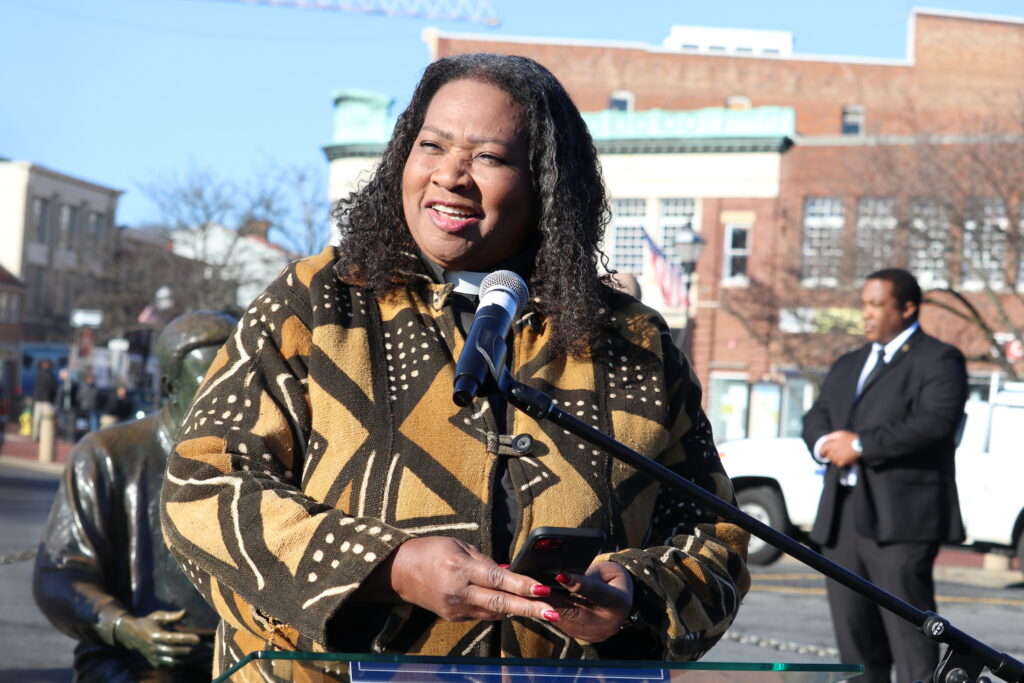 Rev. Carletta Allen, pastor of Asbury United Methodist Church in Annapolis, offered a prayer during a ceremony that recalled the memory of enslaved Africans brought to America through the city’s dock. Photo by Danielle E. Gaines.

“Today we gather not to remember and weep, but to celebrate and rejoice that the descendants of those who survived the many voyages made to this land are now counted among the elected,” said the Rev. Carletta Allen, pastor of Asbury United Methodist Church in Annapolis, who gave the invocation during ceremony. “Maryland has called and chosen one of those, Gov.-elect Wes Moore, and his Lt. Gov.-elect Aruna Miller, to lead this great state and a new day.” 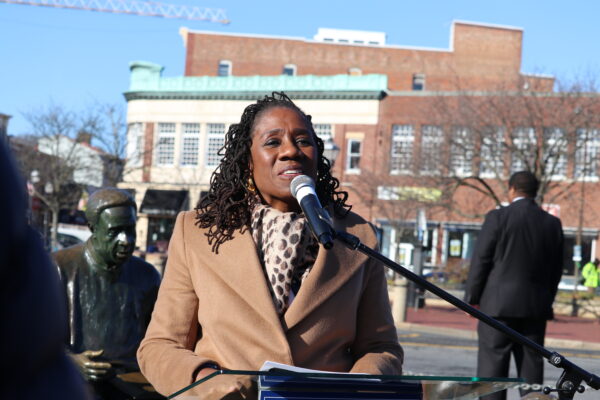 Also attending was U.S. Capitol Police Officer Harry Dunn, one of several officers who defended the Capitol during the Jan. 6, 2021, insurrection.

“I’m just excited for the opportunity to just be here, one as a Maryland resident, and then two, as a Black man [and] seeing another Black man break down barriers,” Dunn said minutes before the ceremony. “I support Wes Moore and I’m honored to just be a part of this moment in history.” 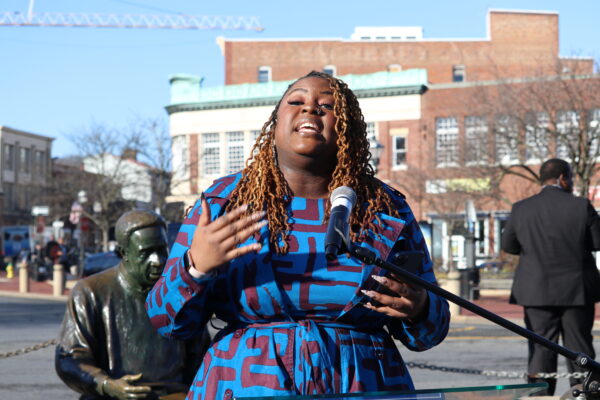 Dunn stood beside and chatted for a few minutes with Sherrilyn Ifill, former president and director-counsel of the NAACPs Defense Legal Fund, who gave remarks along the dock.

“Thank you. A lot of god has come out from what you did,” she said to Dunn.

“Thank you,” he replied.

The ceremony highlighted Moore and Miller, who placed a colorful wreath in front of the memorial.

Afterward, Moore and his family led a peace walk from the docks, up Main Street, to Government House, the governor’s official residence.

Along the way, the procession stopped in its tracks as a musician crooned “A Change is Gonna Come.” In the middle of Main Street, the Moore family embraced and shed a few tears, before continuing on their journey. 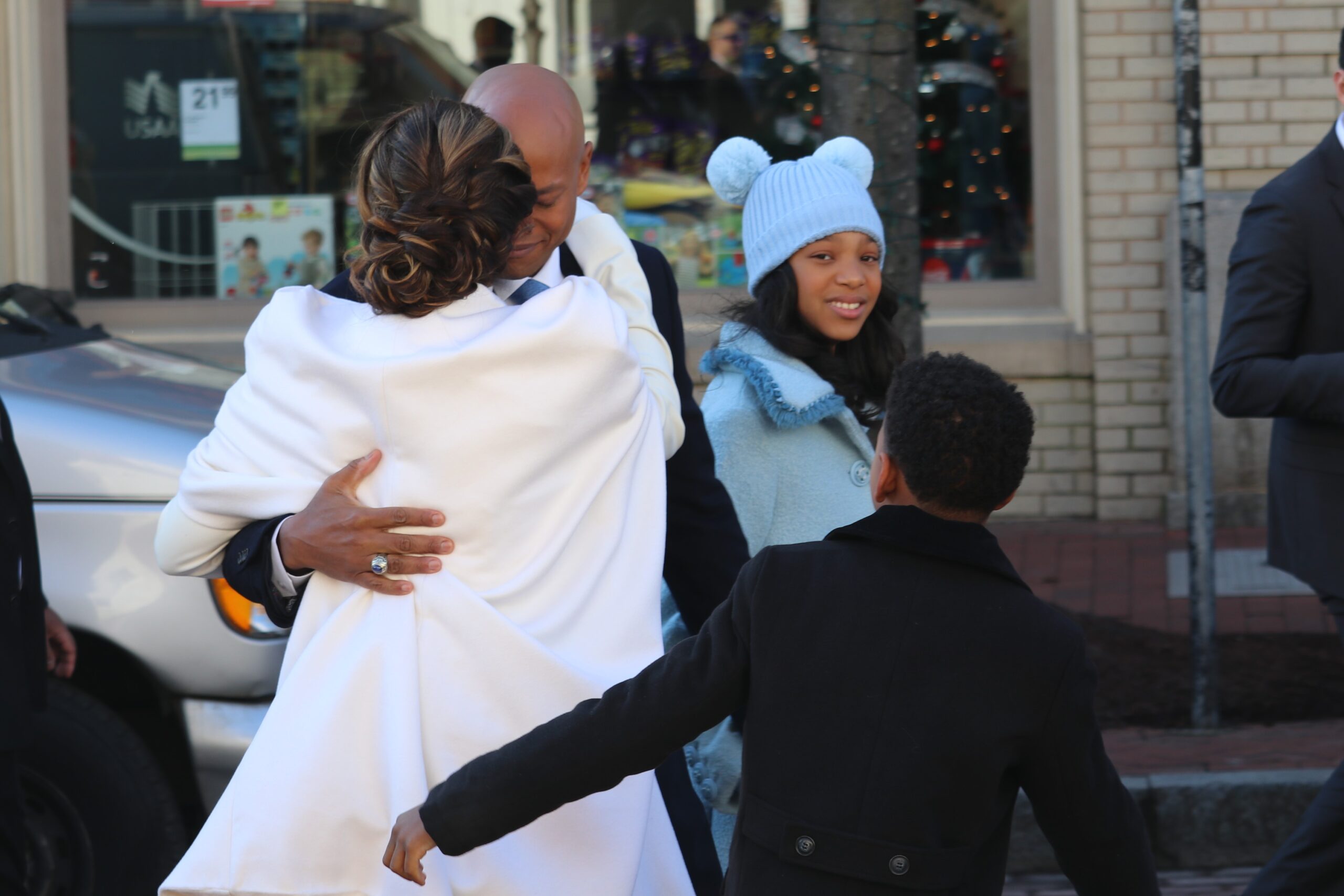 Wes Moore and Dawn Flythe Moore embrace on Main Street in Annapolis as they walk with their family to the governor’s mansion ahead of Moore’s swearing-in as Maryland’s first Black governor on Wednesday. Photo by Danielle E. Gaines.

As dozens of people walked along with the family, a few people sang along, smiled, took videos and basked in the historic moment.

Jealous, who won the Democratic nomination for governor in 2018 but lost in the general election to Republican Gov. Larry Hogan, said the one major obstacle Moore must overcome as governor is improving the state’s education system.

“The number one thing he must make sure is that every child in this state gets a great education. That is the most painful legacy of racism and discrimination against low-income families,” Jealous said. “…He has a great opportunity to transform our educational system. He’s assembling a team that’s capable of that. I’m very excited.” 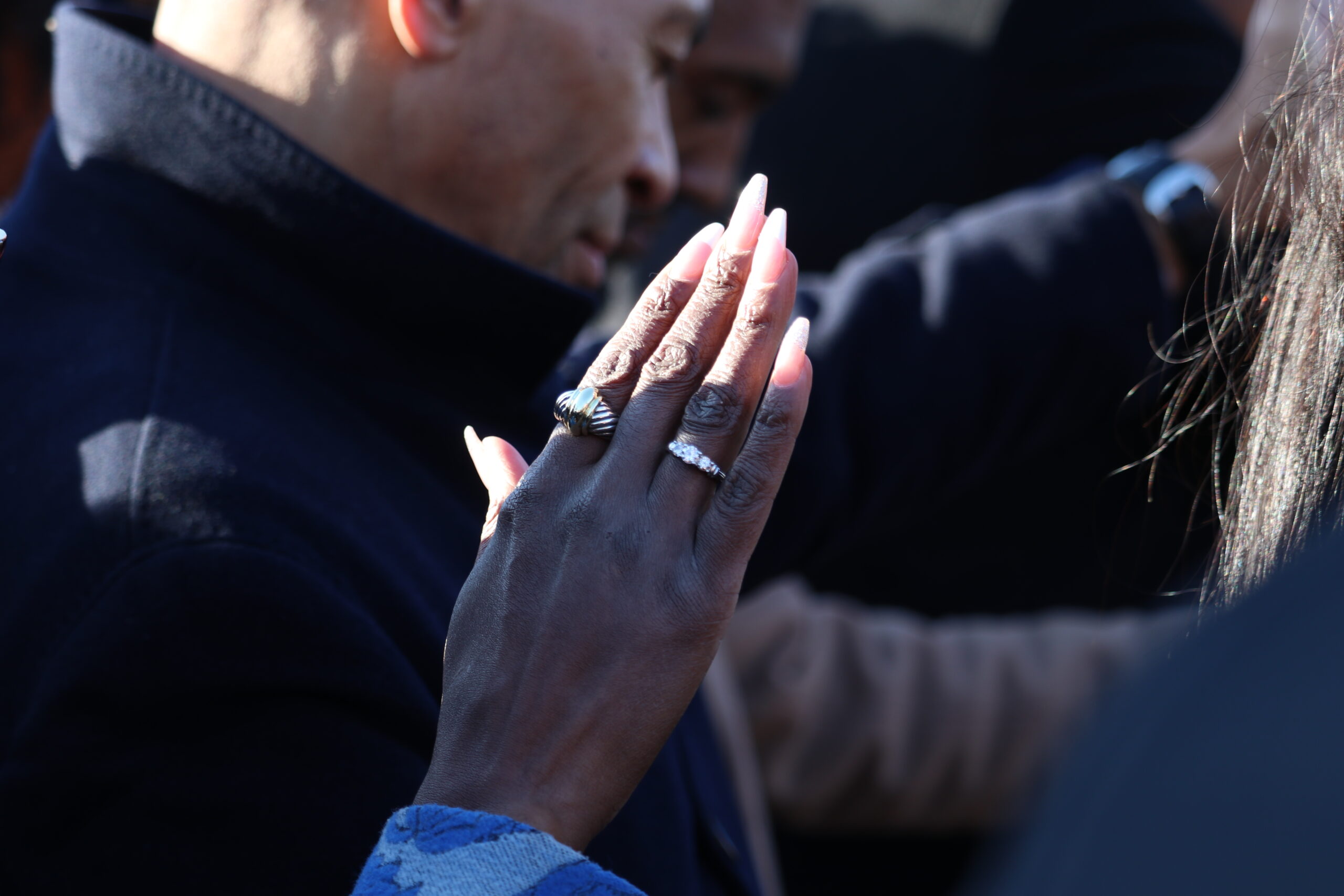 A woman raises her hand to offer blessings during the benediction prayer at a ceremony honoring Maryland’s Black history ahead of the inauguration of Wes Moore on Wednesday. Photo by Danielle E. Gaines.