Gov. Larry Hogan (R) will leave office Wednesday with the same stratospheric job approval ratings that he’s enjoyed for most of his time in office.

A recent poll conducted for Gonzales Research & Media Services, an Arnold-based polling firm, showed Hogan leaving office with an eye-popping 77% of Marylanders approving of the job he’s doing as governor. That’s just one tick below the 78% high-water mark he received two other times in the Gonzales poll, which has been tracking Hogan’s popularity since January 2016, a year after he became governor.

The telephone poll of 823 registered voters was taken Jan. 9-14, using a combination of land lines and cell phones. It had a 3.5-point margin of error.

Hogan’s job approval ratings would be the envy of any politician, and far outstrip voters’ feelings for President Biden. In the Gonzales poll, 58% of Maryland voters said they approved of the job Biden is doing, compared to 41% who did not. And they’re far more divided along partisan and racial lines.

Biden’s job approval rating among Democrats was equal to Hogan’s: 81%. Pollster Patrick Gonzales called that statistical tie “the most fascinating finding in this survey.”

Asked about the most important issue facing Maryland today, 29% of voters answered the economy and inflation, while 24% said crime and public safety. Ten percent said education, 10% said roads and transportation, 8% said affordable housing, and 7% said climate change and the environment.

For Black voters, crime was the number one issue at 35%; for Republicans, inflation and the economy were mentioned by 46% of voters. Democrats were split between public safety (26%) and the economy (24%). 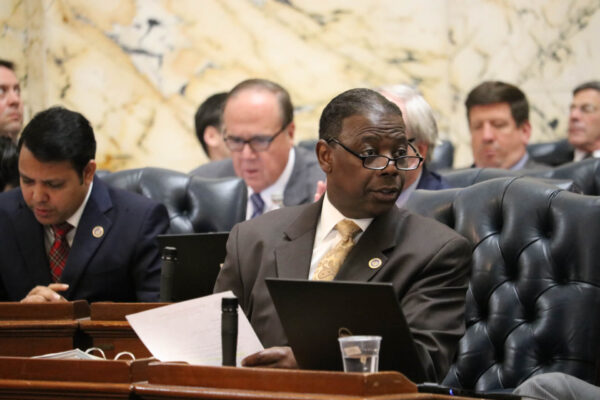 Branch, who was elected to the House of Delegates in 1994, will join Capitol Strategies as a senior adviser, assisting with strategy for the firm’s current clients and helping to sign on new clients. Over his 28-year House career, Branch served on three House standing committees and was chair of the Legislative Black Caucus. He served as majority whip from 2007 until his retirement, and was one of the wiliest inside players in the State House.

“We could not be more pleased to have someone with the experience, reputation and relationships that Talmadge possesses,” said Capitol Strategies’ managing partner, David Carroll. “Having served nearly 30 years in the General Assembly and on nearly every House committee, he will bring unique perspectives on Maryland’s state and local governments to our clients.”

Branch, who will not be able to lobby his former legislative colleagues until January 2024, joins a 23-year firm with seven lobbyists and strategists, including Sushant Sidh, a partner who worked on Branch’s legislative staff in the 1990’s.

“Talmadge has been a close friend of the firm,” Sidh said. “Ironically, he was my first boss in Annapolis almost 25 years ago, and I am thrilled to be working with him again.”