Lt. Gov. Boyd Rutherford (R) won’t be taking much time off when his tenure in the Maryland State House concludes.

The Columbia-based law firm of Davis, Agnor, Rapaport & Skalny announced Tuesday that Rutherford will start work there on Jan. 30, working as a new partner to develop a practice in government relations and lobbying at the local, state, and federal levels.

Rutherford, who often during the throes of the COVID-19 pandemic presided over Maryland’s Board of Public Works, which oversees high-dollar state contracts, will also help the law firm expand its existing government contracting and procurement practice, according to the announcement.

“We couldn’t be more excited to welcome Boyd to our team as our firm continues to grow,” said Paul Skalny, managing director of the firm. “He has a keen understanding of government processes, a great legal background, and a pro-growth mindset. We see him as a senior statesman who will not only help develop our public-sector practices, but also identify people we can recruit through his vast network of contacts and mentor a rising class of attorneys.”

For his part, Rutherford said he respected the firm’s work “and long history of community service.”

Rutherford leaves office at noon on Jan. 18, when Lt. Gov.-elect Aruna Miller will be sworn in.

“As I look back on my tenure in state government, one of my proudest accomplishments is that I maintained good relationships with individuals on both sides of the political aisle, which is no easy task these days,” Rutherford said in a statement. “I’m thrilled that the firm is excited for me to maintain those relationships.” 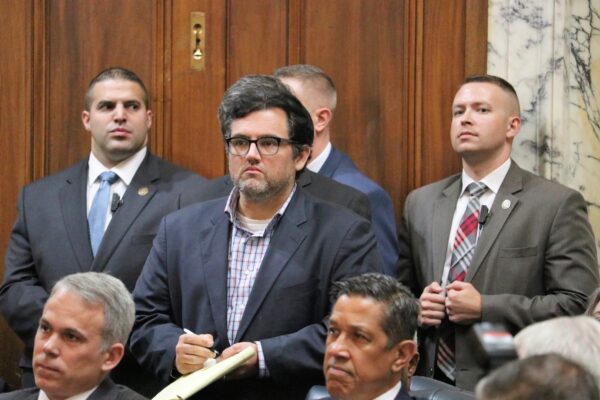 Mike Ricci, Gov. Larry Hogan’s director of communications, is headed back to school.

Ricci will be a spring 2023 fellow at Georgetown University’s Institute of Politics and Public Service, the school announced Tuesday.

Hogan tweeted congratulations to Ricci for the new endeavor.

“Mike is a shining example of public service at its finest. I have no doubt his experience and example will encourage even more Hoyas to pursue careers in government,” Hogan said.

On board with Brooke

Comptroller-elect Brooke Lierman announced the next wave of hires for her incoming administration on Tuesday, including three new deputy comptrollers.

Valorie Sanders will serve in a new position, deputy comptroller for public engagement, heading up communications and public relations activity, as well as the comptroller’s field offices. Sanders is currently executive director of communications at the Department of Public Safety and Correctional Services.

Ben Seigel will serve as deputy comptroller for policy, public works, and investment where he will guide the office’s policies related to the Board of Public Works, pensions, revenue estimates and research. Seigel previously led a consulting practice and before that served as the first executive director of the Johns Hopkins 21st Century Cities Initiative.

Rachel Sessa will serve as deputy comptroller for law and compliance where she will oversee the legal division, field enforcement, special litigation, and other related practices. Sessa spent nearly ten years at the Department of Public Safety and Correctional Services, most recently as Chief of Staff.

Kai Boggess-de Bruin will serve as chief equity and transformation officer, a position that Lierman committed to establishing on the campaign trail. Boggess-de Bruin most recently worked as chief of staff to Anne Arundel County Executive Steuart Pittman (D).

Jasmine Clemons will serve as the comptroller’s director of the Board of Public Works.

Joe Francaviglia, Lierman’s campaign manager in 2022, will be director of government affairs, the comptroller’s chief lobbyist.

“I am proud of the dynamic team we are assembling in the Comptroller’s office,” Lierman said in a statement. “These individuals are committed to providing world-class customer service to the people of Maryland and ensuring the office is accessible, transparent, and effective for all Marylanders.”

She is set to be sworn into office next Monday, the first woman in state history to hold the position of comptroller.

House Republicans in Annapolis, as expected, voted Tuesday to make Del. Jason Buckel of Allegany County their minority leader. Buckel has held the job since April 2022.

“I am extremely honored and humbled to have the faith of my colleagues to continue to lead,” Buckel said. “We have the unique opportunity to be the face of Republicans in Maryland. This is an extremely significant position, and it is incumbent upon all of us to do our level best. We have an opportunity to fight to make a difference in the future of Maryland.”

“Our members have such a wide variety of backgrounds and talents, and I look forward to working on their behalf,” Pippy said.

House Republicans face a daunting task this legislative term, with just 39 members compared to 102 for the Democrats.

Wood to the wise

Speaking of beleaguered Maryland Republicans, the state Republican Party on Tuesday announced that Adam Wood would be taking over as executive director. He’ll serve in tandem with the new state GOP Chair Nicole Beus Harris, who took over last month.

“Adam Wood has a wealth of political knowledge and an extensive background in campaigns, activism, and policy, both on the national and state levels,” Harris said. “Furthermore, Mr. Wood’s past work with both the Tea Party/House Freedom Caucus conservatives and the Republican Governance Group/Tuesday Group moderate Republicans will bolster communication and unification within the party. He will be a key resource in our efforts to build a robust and effective party structure.”

A top aide to Maryland Congressman Steny Hoyer (D) will helm the Democratic Congressional Campaign Committee in the 2024 election cycle — when Democrats need to flip just five seats to retake control of the House.

As first reported by Politico, Suzan DelBene (D-Wash.), the new DCCC chair, has tapped Julie Merz to run the day-to-day activities of the House Democrats’ campaign arm. Merz worked most recently as director of member services for Hoyer when he was House majority leader. She also ran Hoyer’s political action committee, AMERIPAC. Merz has worked several other political jobs through the years, including at the DCCC in 2012 when now-U.S. Sen. Chris Van Hollen (D-Md.) ran the committee.

“Julie’s experience and knowledge of the House and tough campaigns, her courage, and strong leadership will be a tremendous asset in our caucus’ fight to flip the House back to Democratic control in 2024,” DelBene said in a statement.

Merz told Politico that she hoped to help “restore sanity to the halls of Congress.”

Fit for a King

John King, the former U.S. secretary of Education under President Obama and erstwhile candidate for Maryland governor in 2022, started a new gig this week as chancellor of the State University of New York, which takes in 64 colleges and universities.

This serves as a homecoming for King, who grew up in New York, was educated in New York schools, and served as the state’s commissioner of Education from 2011 to 2015.

King said he was dedicated to to making SUNY “the best statewide system of public higher education in our nation.”

“Public education quite literally saved my life when I lost both of my parents at a young age, and I have dedicated my professional career ever since to ensuring that every student has access to the academic opportunities that they need and deserve,” he said last month after his appointment was announced.