The 445th session of the Maryland General Assembly kicked off with the usual pomp and fanfare Wednesday, magnified by the expectations that a new legislative term coinciding with a new gubernatorial administration brings — along with the pure joy of gathering under customary circumstances following three years of pandemic protocols.

“It’s great to get back to some semblance of normalcy and to welcome our guests back to the House of Delegates,” said Speaker Adrienne Jones (D-Baltimore County) after unanimously being reelected by her colleagues.

The first day of the legislative session always attracts a crowd, but the House and Senate chambers were overstuffed Wednesday with families, friends and dignitaries gathered to witness the swearing-in ceremonies — the first time the public has been allowed to roam freely through the legislative complex since COVID-19 first hit in March 2020. The 47-member Senate has eight new members and one vacancy, with another expected next week, while the 141-member House has 40 newcomers, with at least a couple of vacancies anticipated in the very near future.

“Opening Day is always a special day,” Jones said. “It’s a particularly special day for new members, especially when they walk into the chamber for the first time and see their names on the [vote tally] board.”

“It’s extremely surreal. It’s such an overwhelming space,” freshman Del. Mark Edelson (D-Baltimore City) observed in an interview. He repeated several times that he was “over the moon” from the experience. 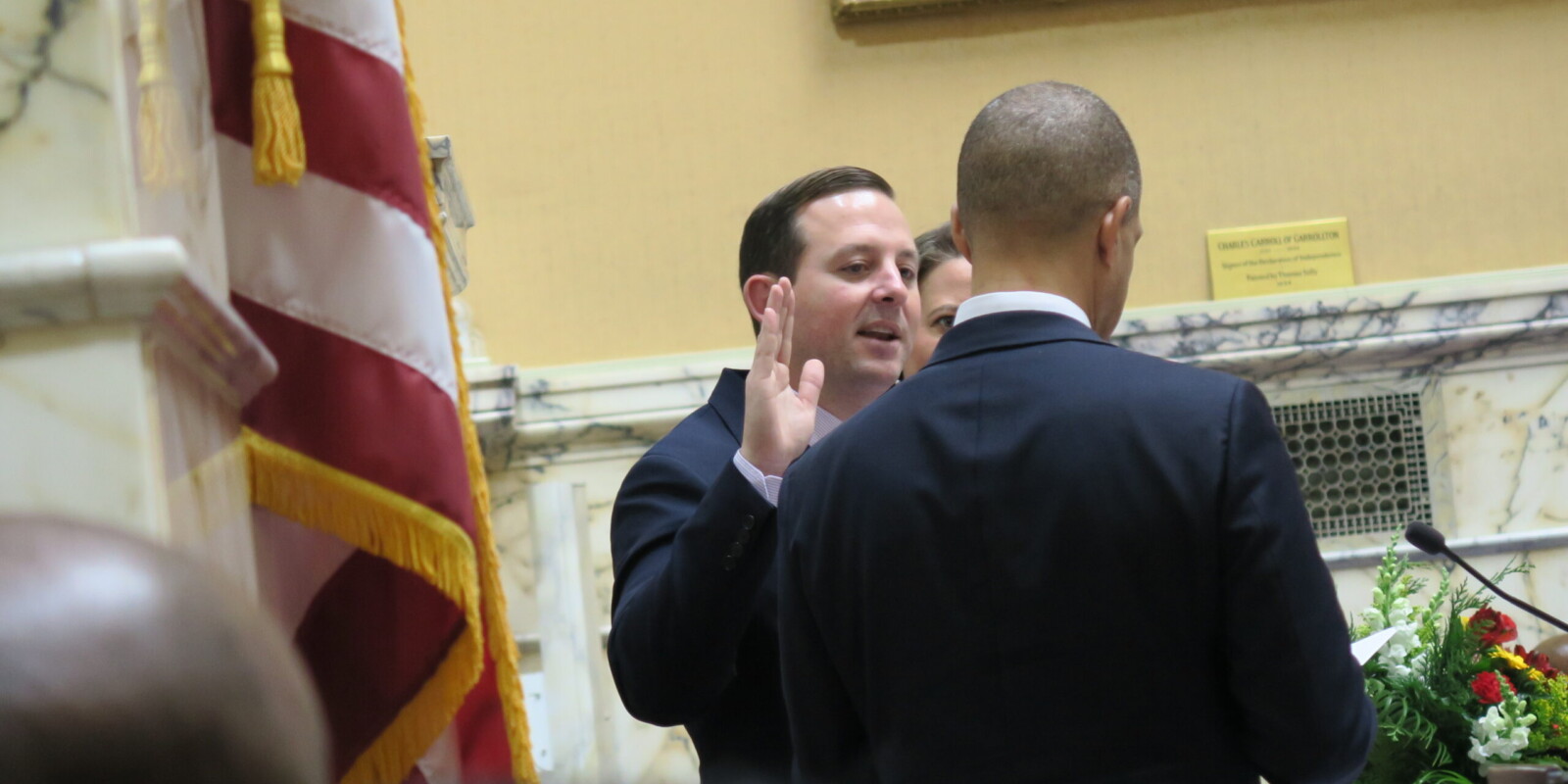 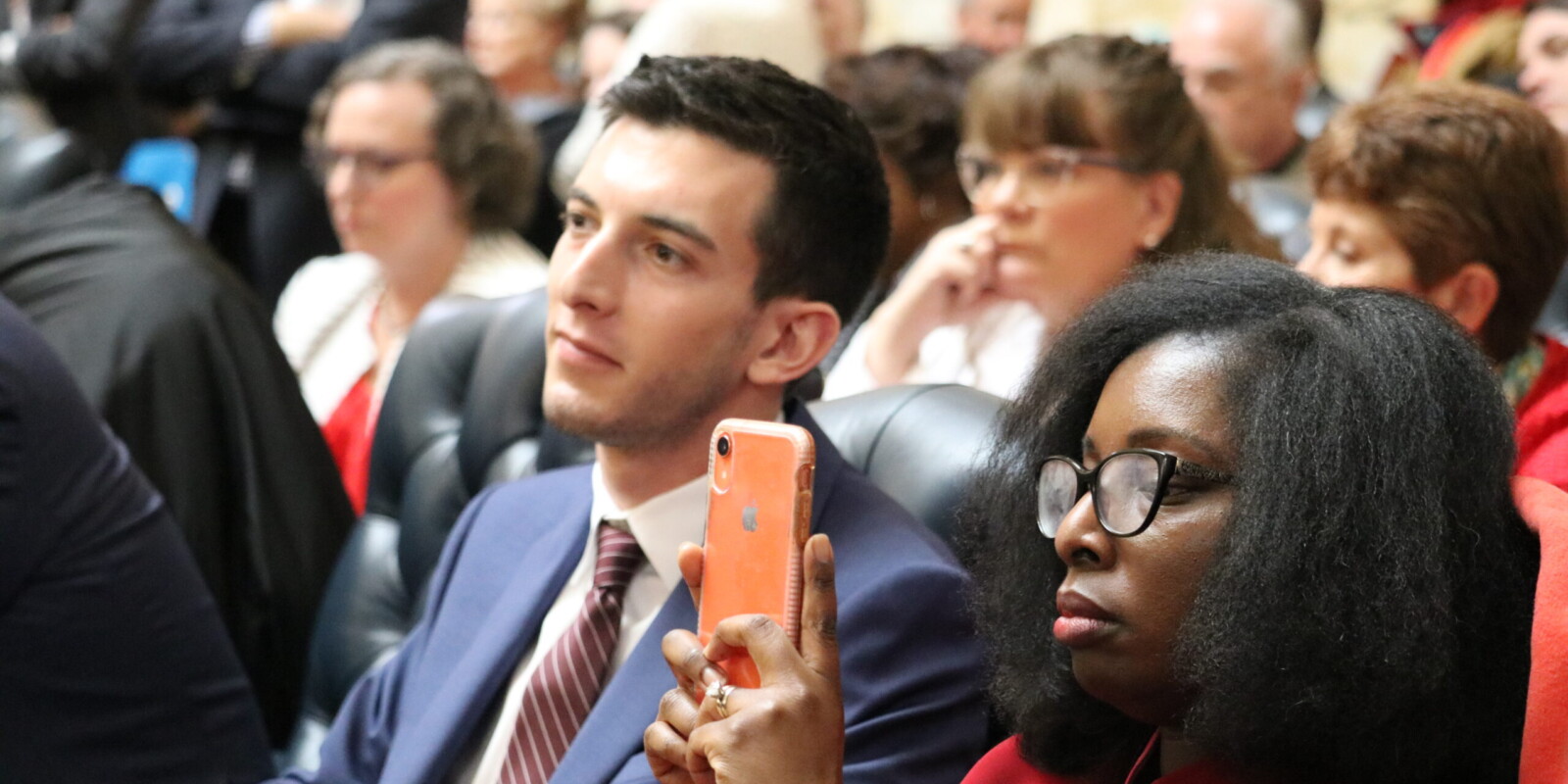 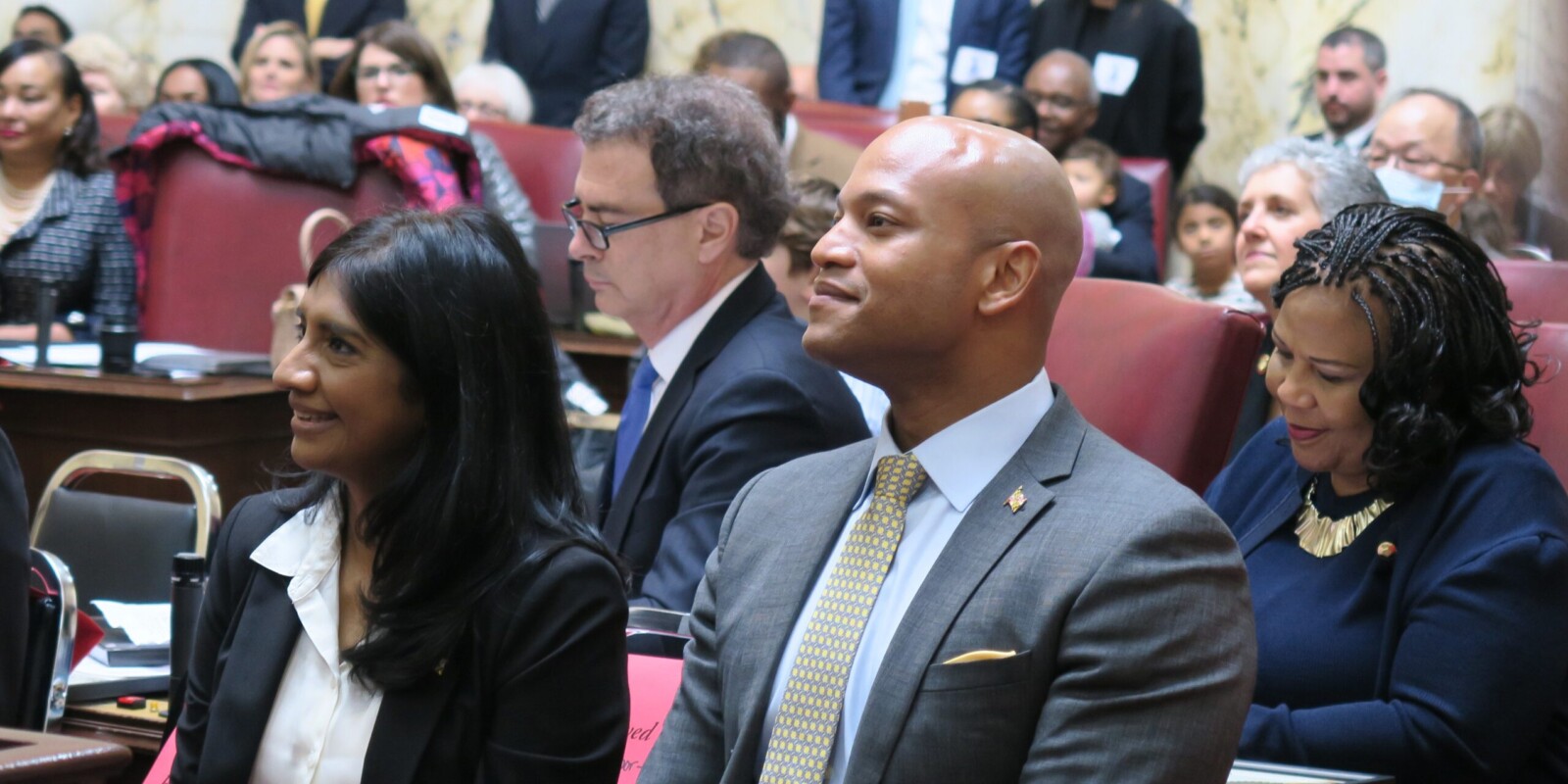 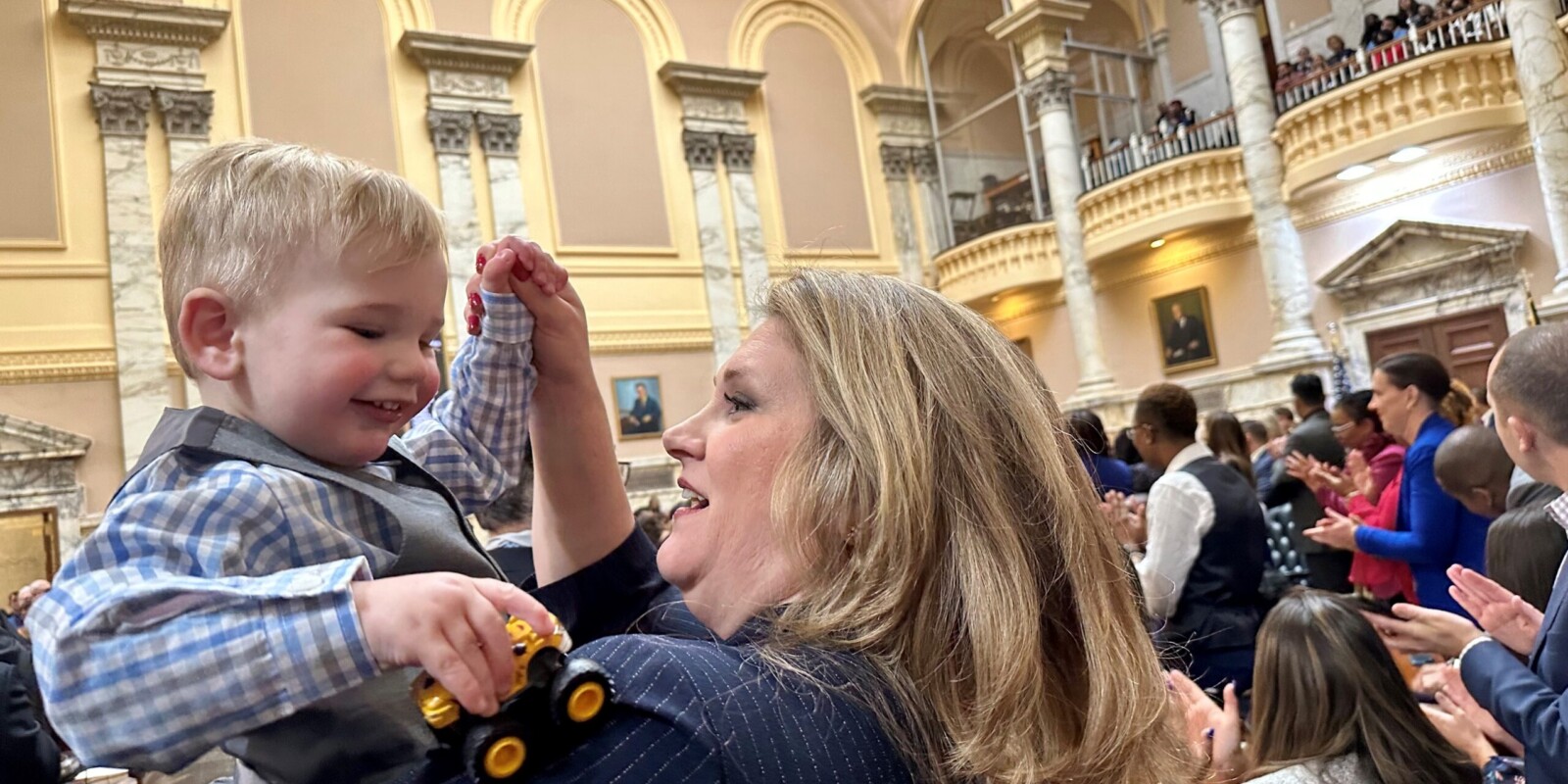 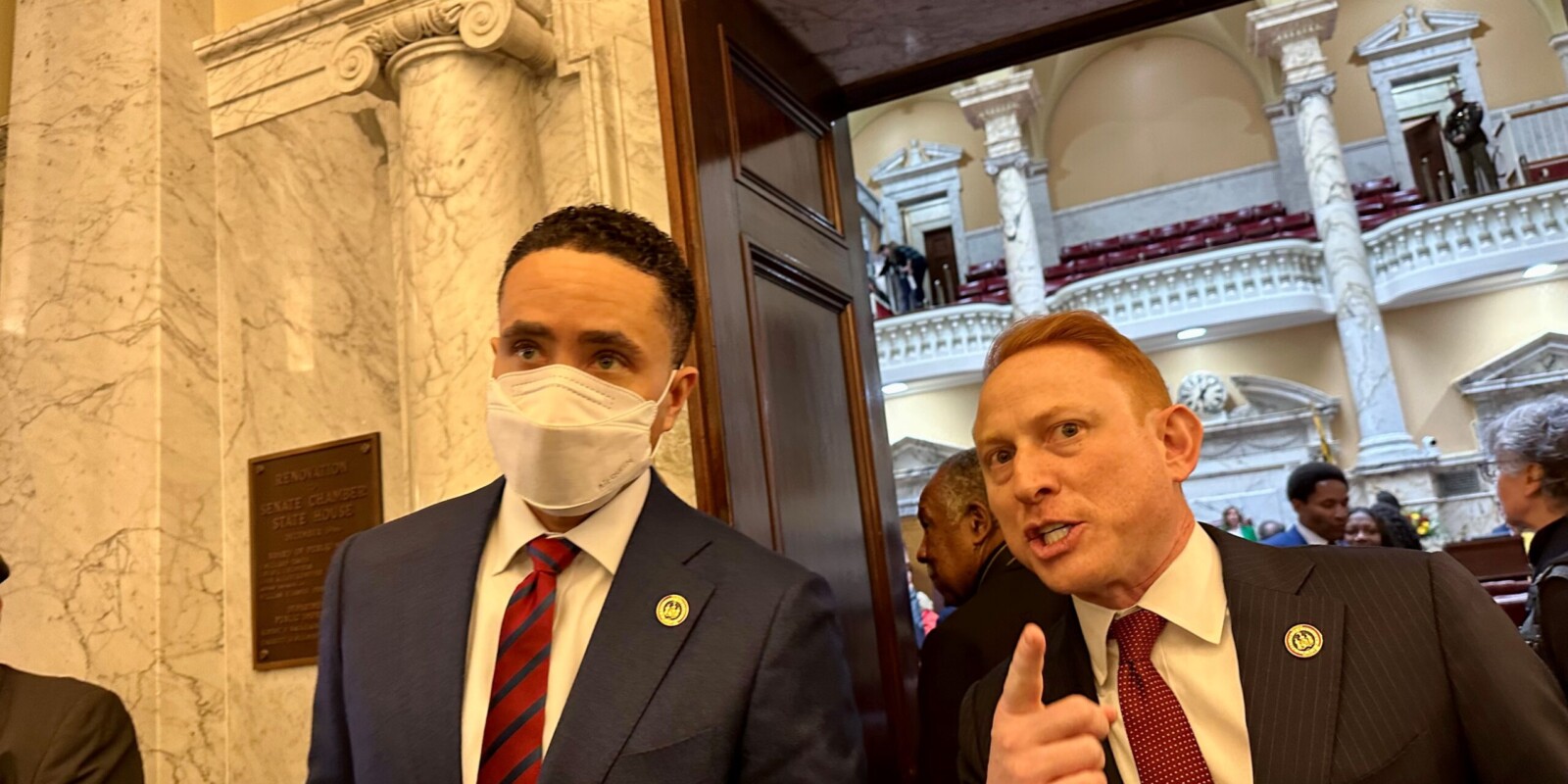 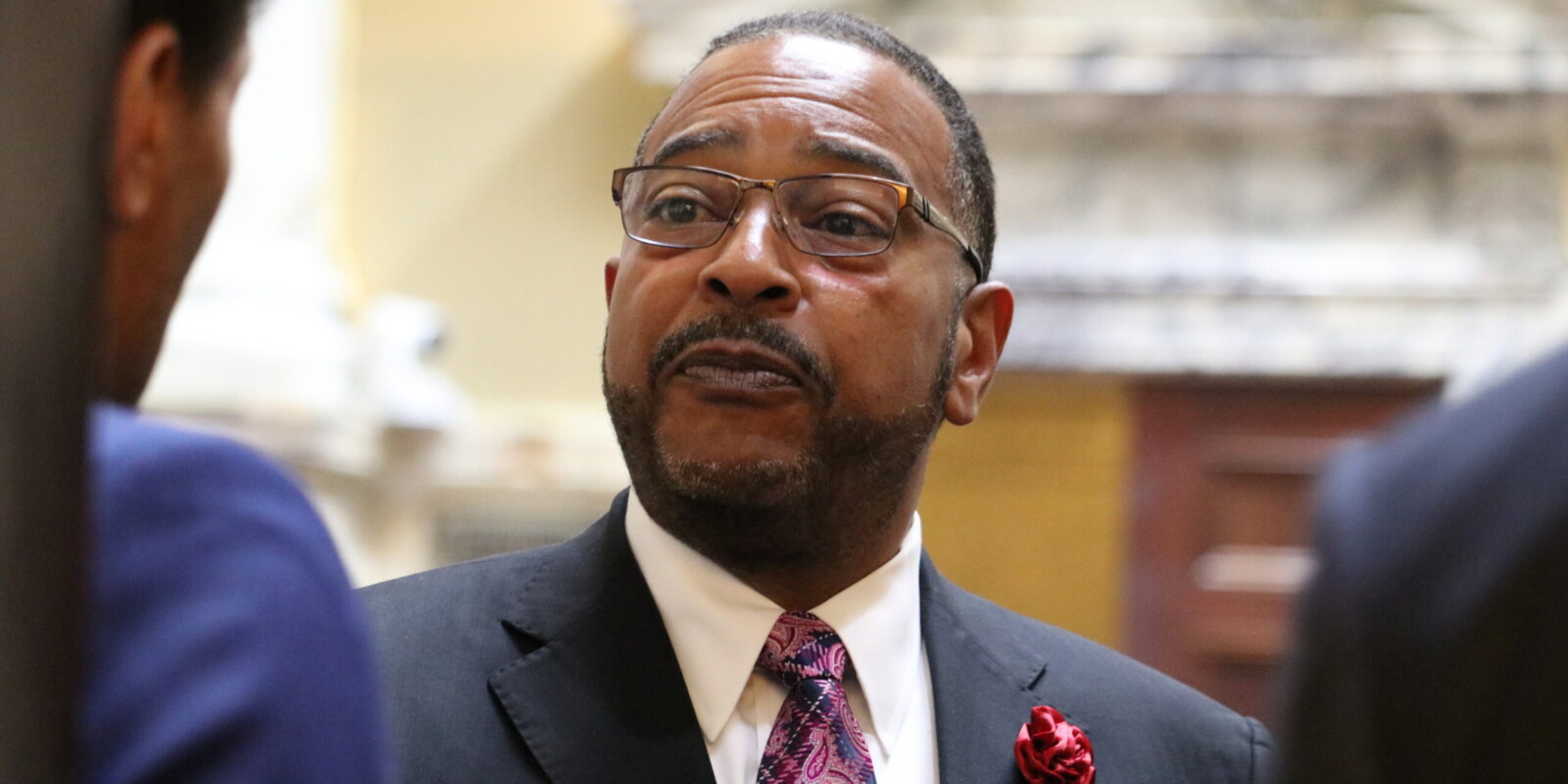 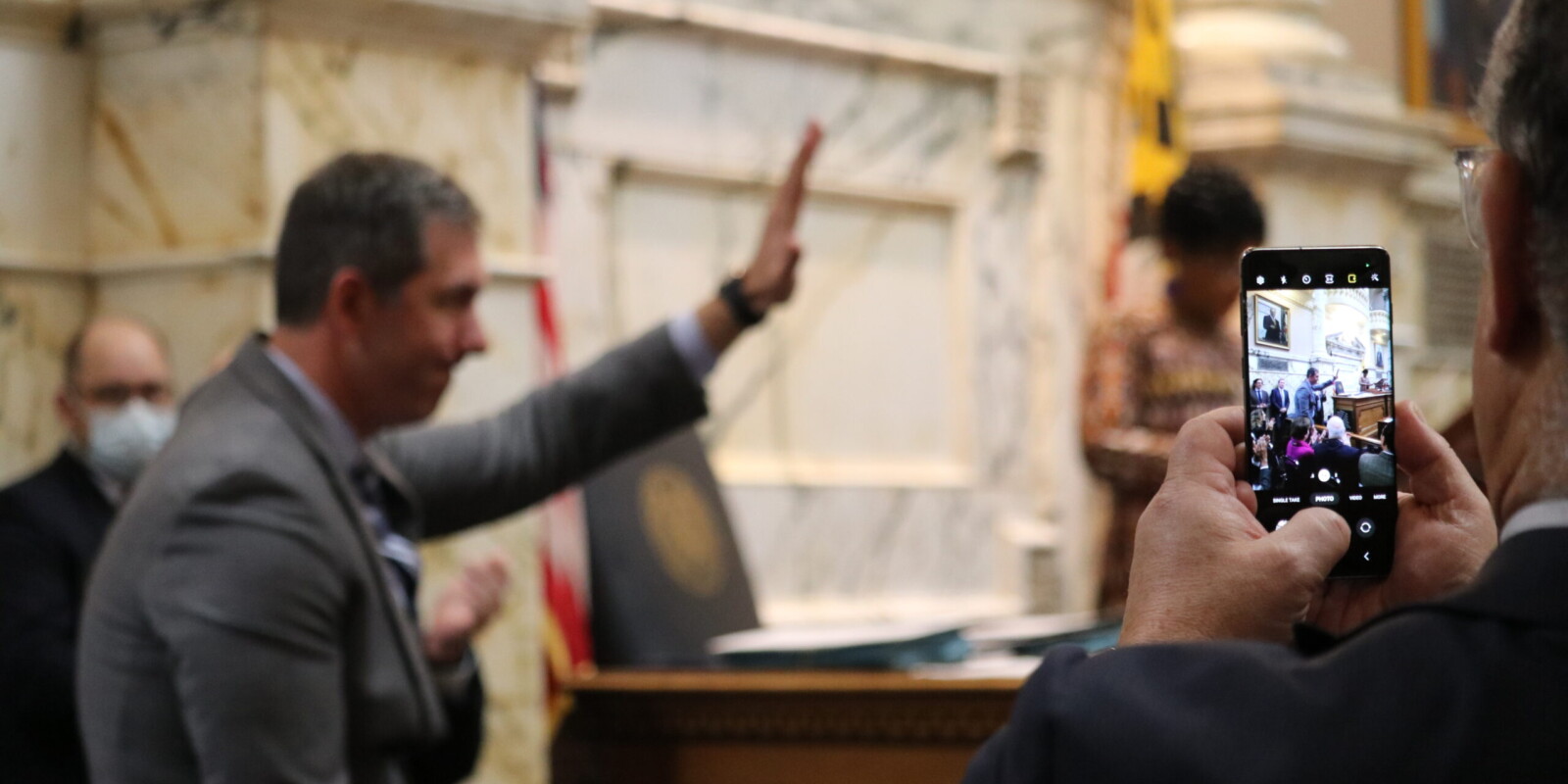 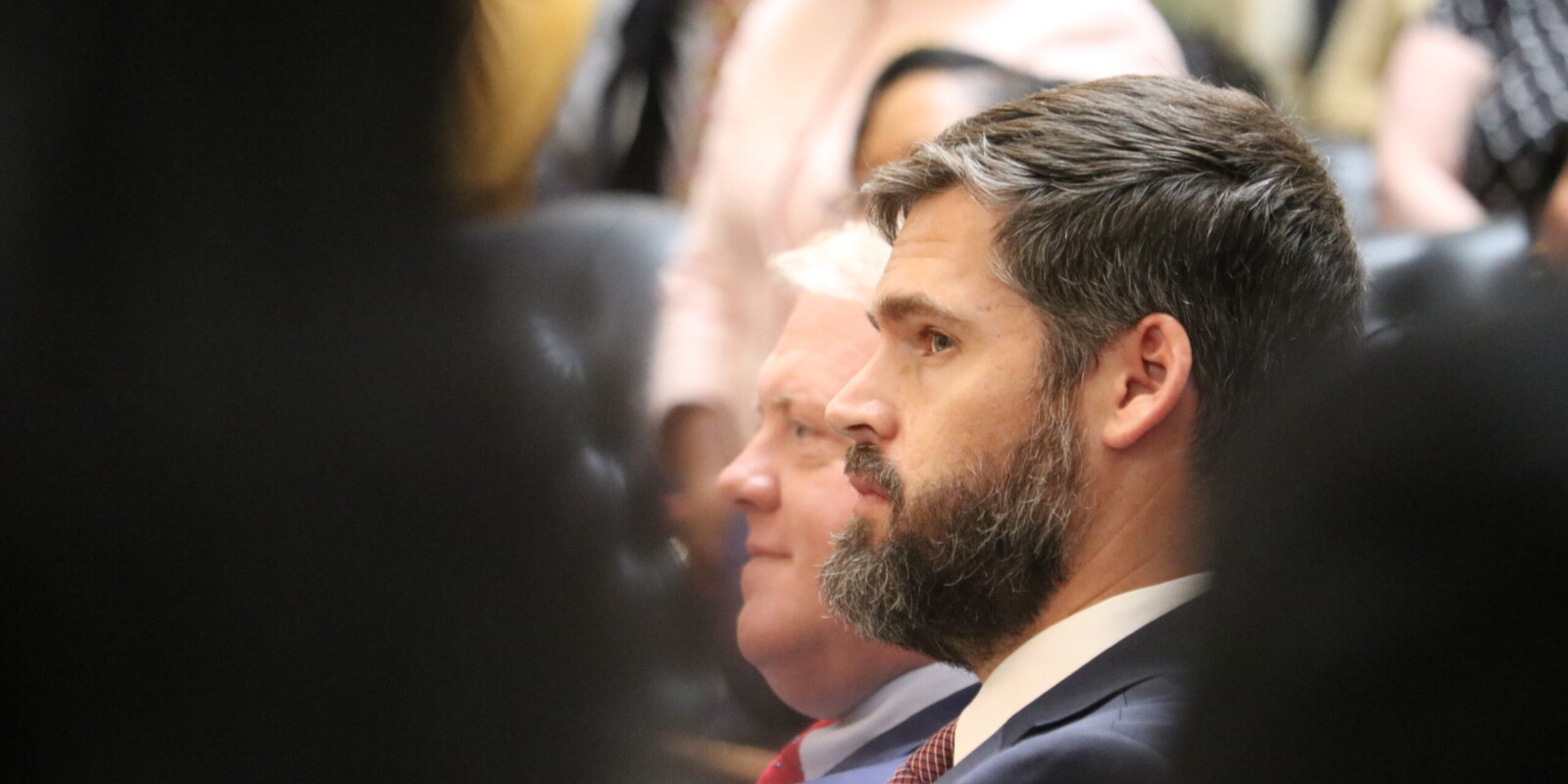 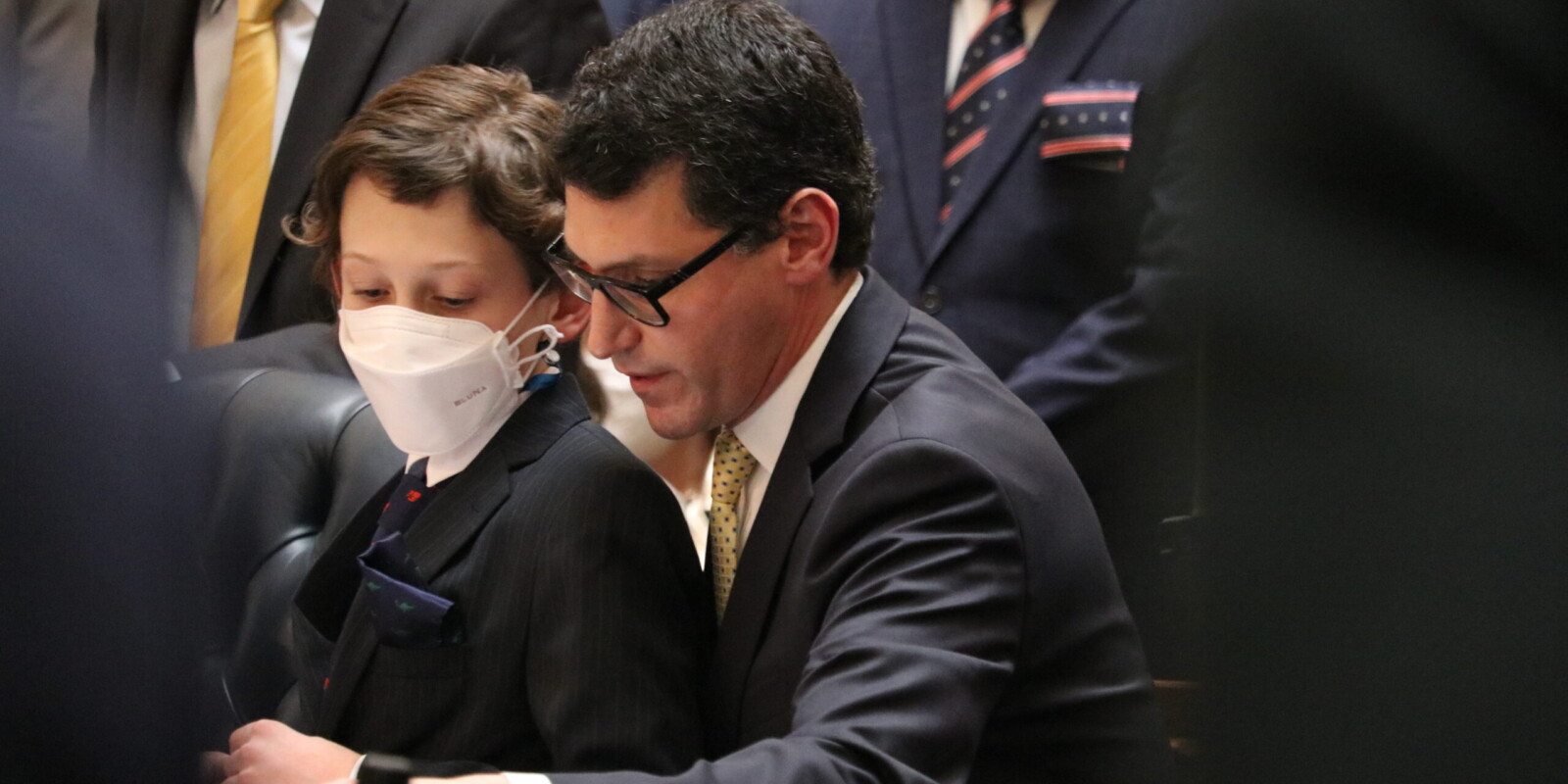 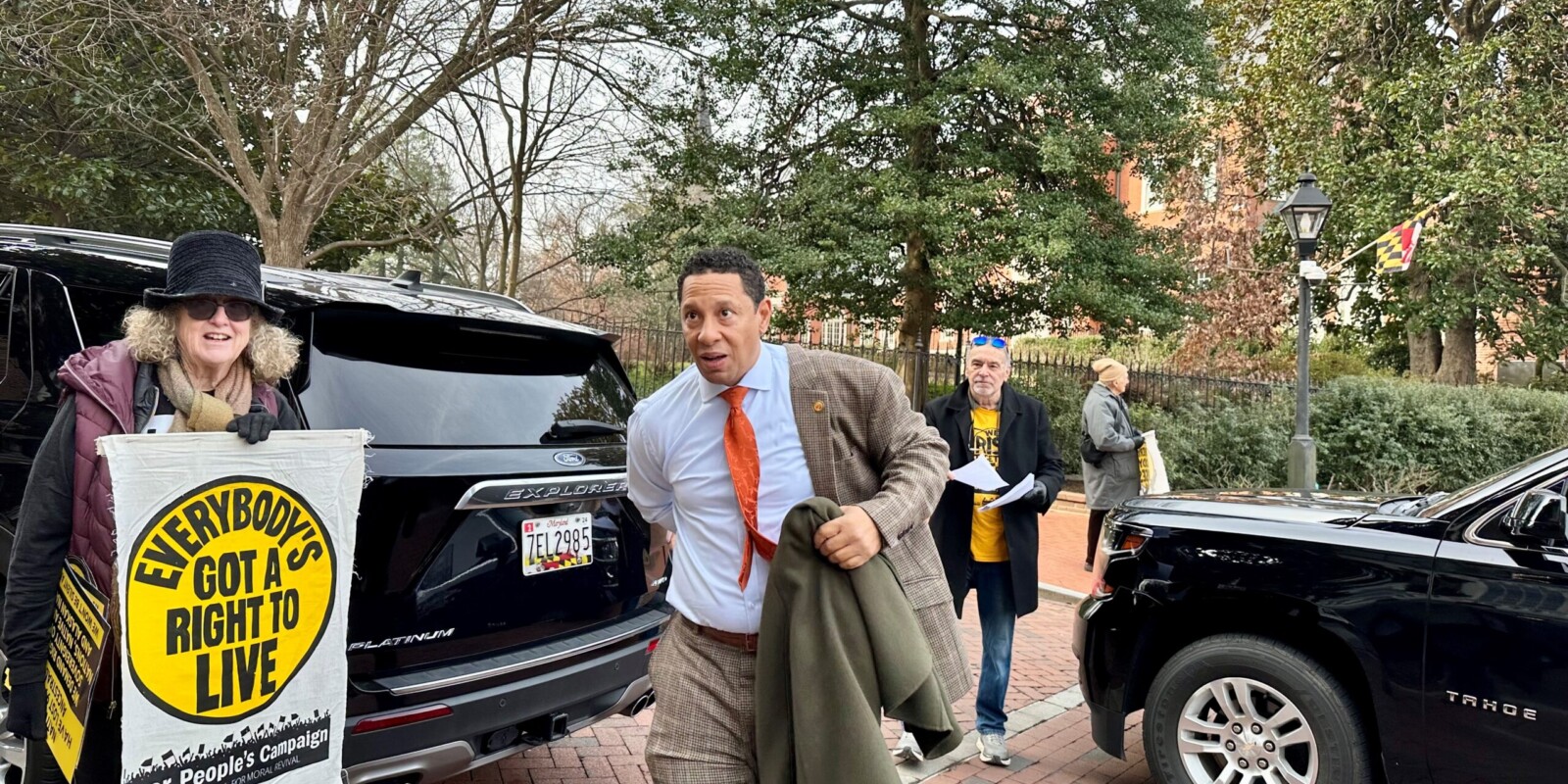 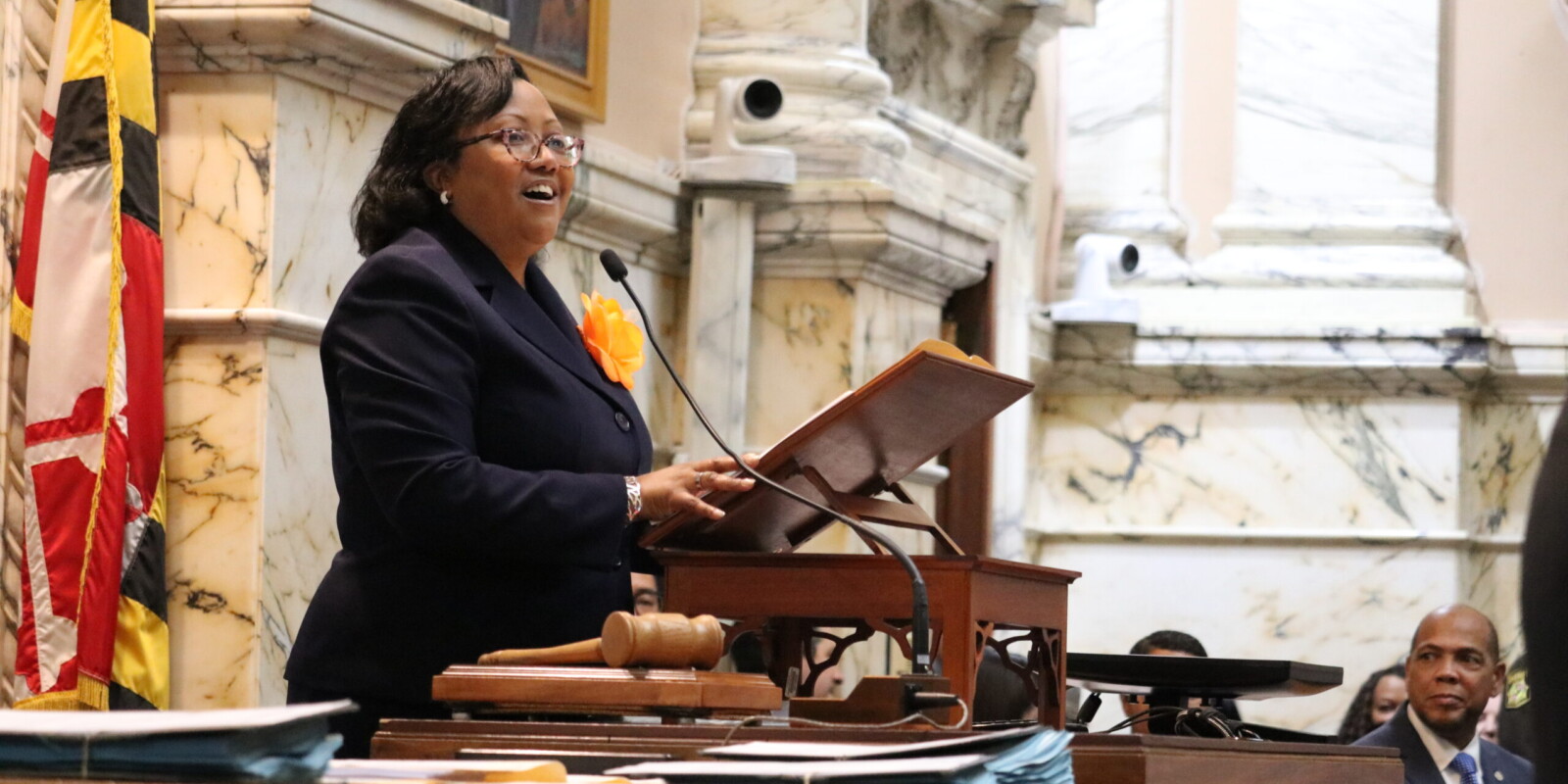 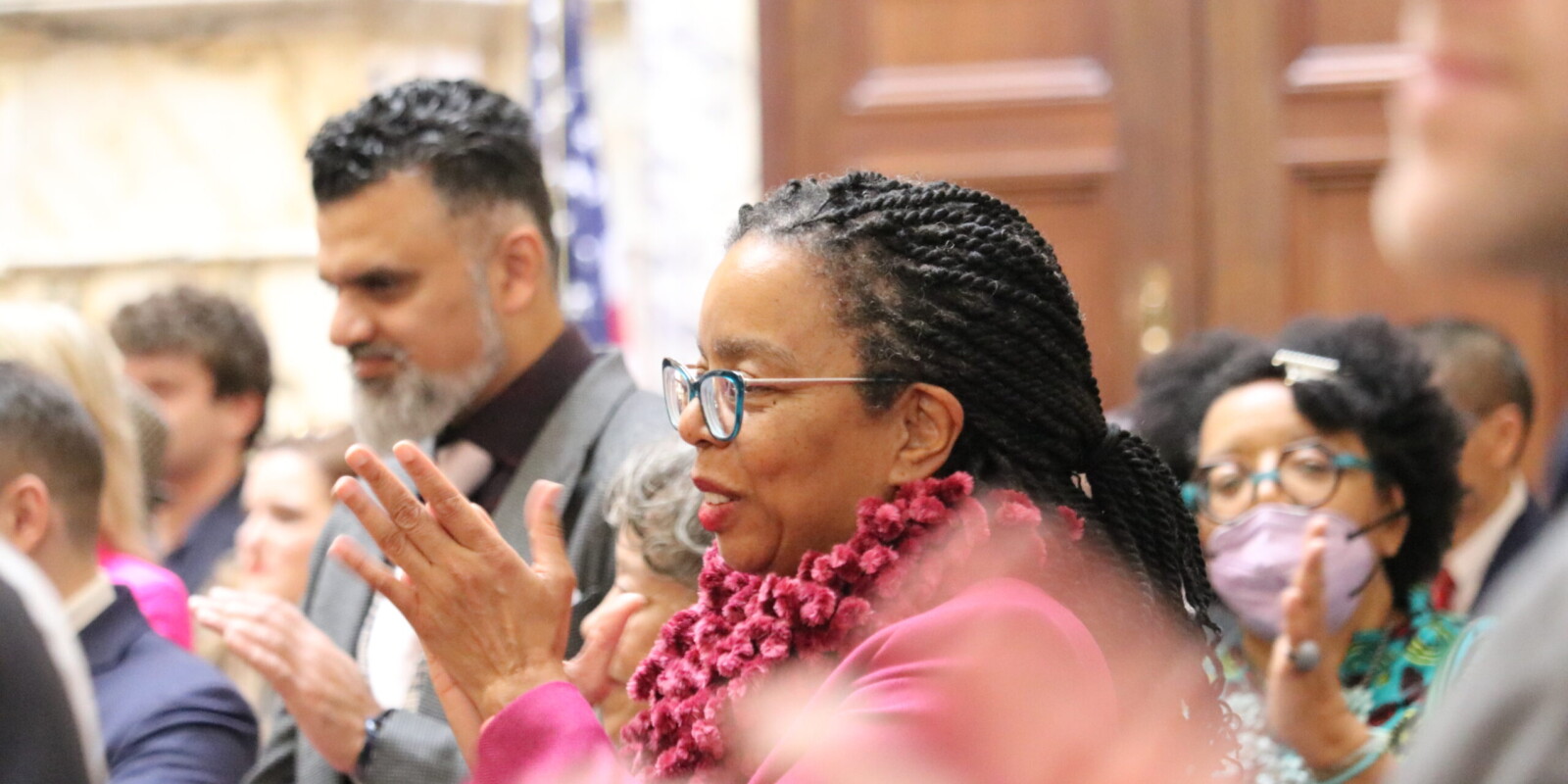 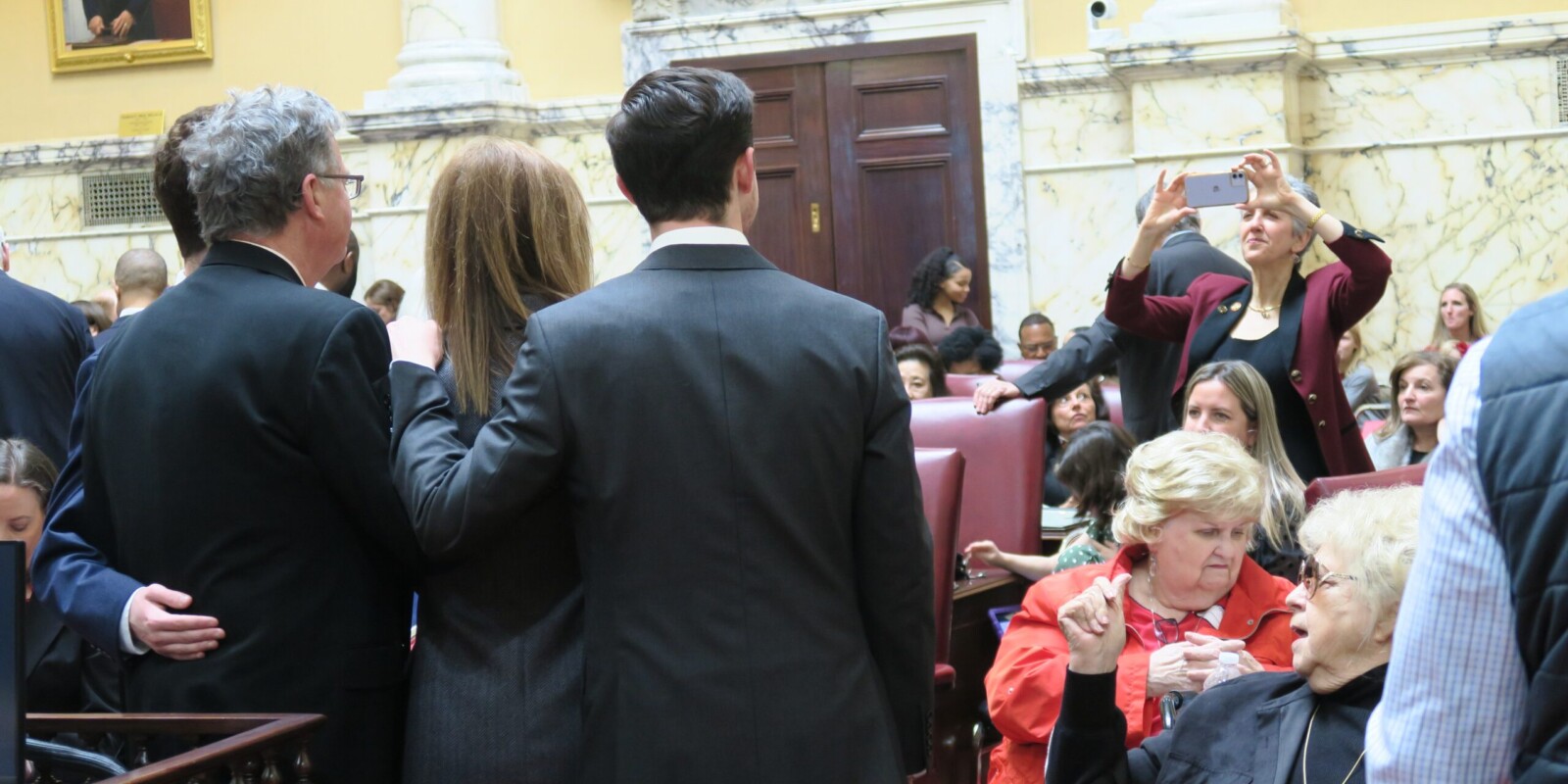 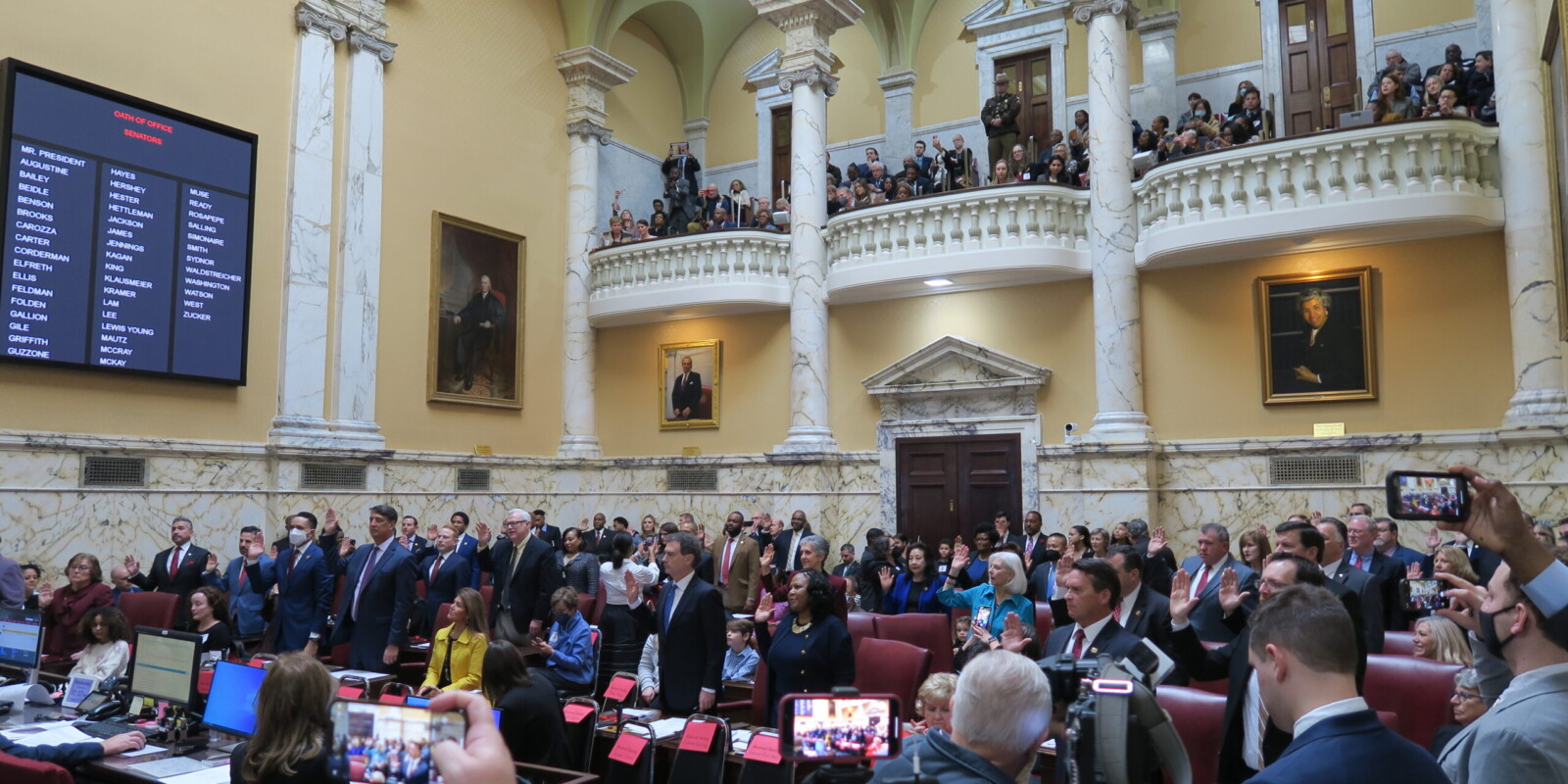 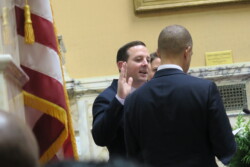 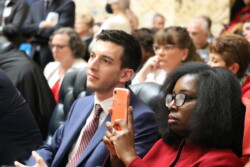 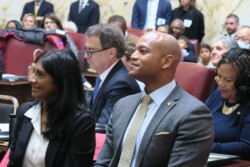 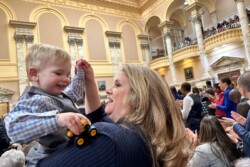 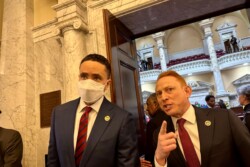 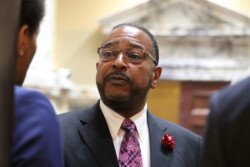 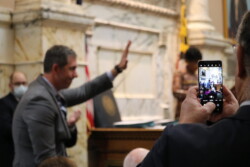 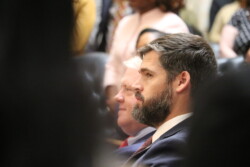 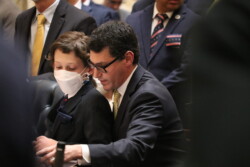 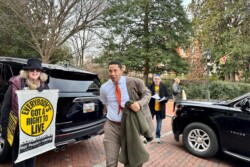 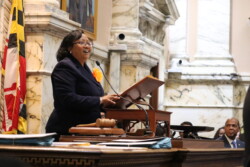 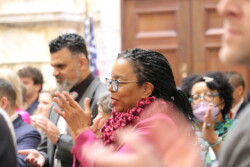 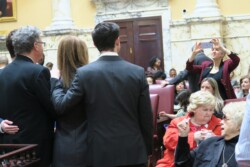 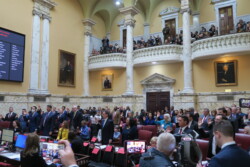 The convening of the new General Assembly session comes a week before Gov.-elect Wes Moore (D) will be sworn in, adding to the celebratory atmosphere for Democrats following eight years of co-existing with Republican Gov. Larry Hogan. Moore and Lt. Gov.-elect Aruna Miller (D) were on hand to witness the ceremonies in both the House and Senate chambers along with dozens of other high-ranking elected officials, though neither spoke. Hogan was nowhere to be seen.

Despite the crowds and the festive air, opening sessions of the House and Senate are usually tidy affairs, with members voting to elect their presiding officers and their top lieutenants and taking a few other procedural steps. Both chambers adjourned about an hour after convening, so lawmakers and their families could indulge in another staple of legislative life — attending the many Opening Day receptions sponsored by lobbying firms, interest groups and fellow politicians in Annapolis.

The House gaveled in at noon, a testament to Jones’ fealty to punctuality. After being sworn in by the chief clerk, Sylvia Siegert, delegates reelected Del. Sharee Sample-Hughes (D-Middle Shore) as speaker pro tem and then with Sample-Hughes presiding, reelected Jones.

Jones’ nomination was made by House Health and Government Operations Chair Joseline Peña-Melnyk (D-Prince George’s) and seconded by Del. Ariana Kelly (D-Montgomery), both of whom described Jones, who took over as speaker on May 1, 2019, as the leader of a big if occasionally fractious family.

“She has deep relationships in this chamber and has earned the trust of every single member,” Peña-Melnyk said.

Jones took the time to praise the personal sacrifices lawmakers make to serve and was careful to also note the sacrifices that their families make.

“I don’t regret a minute of it,” she said. “It may sound corny, but I love public service.”

The Senate didn’t convene until a few minutes after the scheduled 12 p.m. start time because so many members were patting each other on the back, shaking hands and walking some children through tight spaces on the Senate floor.

Before official business took place to introduce bills, each senator walked to the rostrum to receive their framed legislative commission plaque for winning their respective elections in November. Sen. Arthur Ellis (D-Charles) greeted Sen. C. Anthony Muse (D-Prince George’s), who served in the Senate from January 2007 to January 2019.

“Senator! Welcome back. Congratulations,” Ellis said to a smiling Muse, who spent four years in the House, from 1995 to 1999.

Sen. Malcolm Augustine (D-Prince George’s) was unanimously elected as Senate president pro tem. The first person to nominate Augustine was fellow Democrat and Prince Georgian, Sen. Melony Griffith who held the position for the previous three sessions and is taking over the Senate Finance Committee.

Augustine thanked Griffith “for the kind words, the nomination and for providing a roadmap of excellence in executing this office for me to follow.”

There was a moment of levity when Senate President Bill Ferguson (D-Baltimore City), unanimously reelected by his colleagues to remain the chamber leader, slightly fumbled as he read the oath of office.

After his oath, Ferguson welcomed several dignitaries and fellow Democrats including Cardin, Moore, Miller, Attorney General Anthony Brown (D), and Comptroller-elect Brooke Lierman (D), who will be sworn in Monday.

“Crowded chamber in here today. We’re back. This is what it should feel like,” Ferguson said. “This is the highest honor I’ve ever been granted in my entire life. I do not take lightly the responsibility that each and every one of you has placed in me to help us lead together as one.”

Although Wednesday appeared to resemble previous pre-pandemic sessions, Ferguson said it’s “not back to status quo.”

“It’s about taking the lessons that we learned over the last two years and scrapping the things that didn’t work and embracing the things that did to make us a more transparent and effective body,” he said to reporters after the Senate adjourned. “While we’re back in regular order, I think we’re all still adjusting to what the last few years were. It’s an ever-changing process.”

Seeking ‘a voice at the table’

With such lopsided Democratic majorities in the Senate and House (34-13 and 102-39, respectively), Republicans were largely cut out of the official proceedings, other than taking their oaths of office, and some members may question their relevancy — especially with Hogan departing. Unlike leadership votes on Capitol Hill, Republicans on Wednesday did not nominate candidates for Senate president and House speaker.

Sen. Steve Hershey (R-Upper Shore), who will serve as the minority leader in the upper chamber, said he’s hoping there will be bipartisanship during the session.

“We are all here for the same reason: to represent our constituents to the best of our ability and to improve the lives of Marylanders across the state,” Hershey said. “Hopefully there’ll be many policy areas where we can seek common ground, but there will be others where we will passionately disagree. But that only makes us and the work that we provide better.”

“I’ve only served during Hogan’s tenure, so it’ll be new to me to serve with a Democrat governor,” she said. “I’m optimistic and have an open mind…If we can have a voice at the table, that would be wonderful.”

Rose conceded that it was a small gesture, but she said Republicans felt gratified to be included at a private reception for state legislators that Moore held Wednesday afternoon at Harry Browne’s, the swanky watering hole across the street from the State House.

Earlier in the day, at a conference sponsored by The Daily Record, Moore, who has largely spoken in broad generalities about his priorities since being elected, offered some of his most specific answers to date on a range of policy questions.

Moore suggested that his No. 1 priority would be restocking state government. By his account, there are as many as 10,000 vacancies at state agencies — higher than the estimates of 6,500 to 6,800 that legislative leaders have discussed. Under questioning from Daily Record reporter Bryan Sears, Moore said he hoped to come close to cutting that number in half during his first year in office.

“We have watched the atrophy of state government,” he said.

Moore said he expected Marylanders to be “proud” of many of his forthcoming appointments, and he said people “will understand how much work has been going on these past few weeks to get everything going.”

Ferguson and Jones have both said they support Moore’s efforts to rebuild and improve state government and said they plan to do whatever they can on the budgetary and policy front to help him.

“Gov-elect Moore has the ability to really motivate people as to the desirability of government service, and to inspire people to serve the public again,” Ferguson said during the Daily Record forum.

Moore also said he planned to release $4.5 million in state funding that Hogan has tied up to provide training for medical personnel other than physicians to provide abortions — though he hesitated a little when pressed on whether he would fulfill an earlier campaign pledge to do so on the first day of his administration. And he also suggested that he would sign controversial “aid-in-dying” legislation to permit physicians to help terminal patients fulfill their wishes to hasten their deaths.

Moore joked that he was jealous seeing lawmakers sworn in and that Brown, who was elected on the same day he was, already on the job as attorney general.

“How does he get sworn in before everybody else?” Moore said “This guy is working, I’m still unemployed for the next 10 days.”

But Moore isn’t the only state official anxious to get to work.

“We have a lot to do over the next 90 days,” Jones told her colleagues Wednesday, “so let’s get to work.”

That was music to the ears of Edelson, the freshman delegate from Baltimore.

The House and Senate will reconvene at 10 a.m. Thursday — to considerably less fanfare than Wednesday — and their committees will hold their first meetings of the year in the late morning or early afternoon.

Editor’s Note: This story was updated to correct the name of Del. Mark Edelson.