A wistful Gov. Larry Hogan (R) gave a farewell address to Marylanders Tuesday evening, then became even more emotional as he watched the unveiling of his official portrait in the Governor’s Reception Room at the State House. 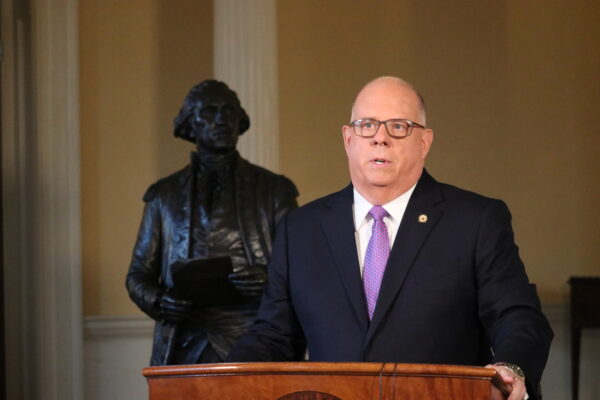 Hogan’s 10-minute speech, broadcast from the Old Senate Chamber and aired on Maryland Public Television and social media platforms, contained many of the governor’s familiar boasts about policy victories and the state’s reversals of fortune during his eight-year tenure. But it was delivered with several doses of humility and wonder at the honor of serving as governor, along with abundant hope for the future.

“Tonight, I am overcome with gratitude for my great partner and friend, Lieutenant Governor Boyd Rutherford, for Maryland’s amazing first lady⁠ — my beautiful wife Yumi ⁠— and my entire family, the members of my cabinet, our governor’s office staff, and every single member of the Hogan-Rutherford administration for their eight years of dedication, and for their incredible contributions and accomplishments,” Hogan said.

“Most of all, I am grateful to all of you⁠ — the people of Maryland⁠ — for your heartfelt support and, in times of personal challenges, for your countless prayers. The honor of serving as your governor is second only to the honor of being your fellow Marylander. I can tell you that there has not been a single day⁠ — good or bad⁠ — when I was not grateful for the privilege, and I am so proud of all that we accomplished together in our mission to change Maryland for the better.”

With a statue of George Washington, who resigned his commission in the State House 240 years ago, looking over his shoulder, Hogan ticked off some of his proudest accomplishments, including:

Hogan, who steps down at noon on Jan. 18, when Gov.-elect Wes Moore (D) is sworn in, noted the history that has occurred in the State House, and added: “Next week, we will add yet another important chapter to our state’s history with the inauguration of Maryland’s first Black governor and first Indian-American lieutenant governor. I ask all Marylanders to join me in wishing Governor-elect Moore, Lieutenant Governor-elect [Aruna] Miller, and their administration much continued success in the years ahead.

“With this peaceful transition, we prove once again⁠ — here in this hallowed place⁠ — that our nation’s founding principles still prevail.”

As he has in the past, Hogan expressed concern over the tone of the political discourse at the national level, but said Maryland “achieved the impossible” when its Republican governor and a legislature dominated by Democrats figured out a way to co-exist.

“We can’t let fringes and factions get in the way of getting things done and solving the serious problems,” he said. “In Maryland, we have proven that this is still possible. Our story should be a beacon of hope for the nation, which seems more bitterly divided than ever.” 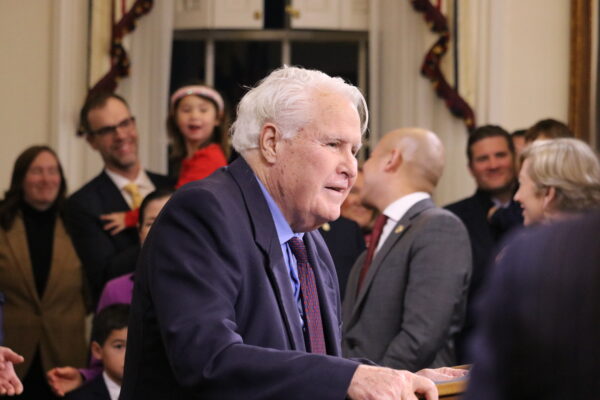 Impressionist painter Cedric Egeli speaks about his portrait of Gov. Larry Hogan (R) before its unveiling Tuesday. Egeli is also the painter of the official portrait of former Gov. Blair Lee III and eight other official portraits in the state’s collection. Photo by Danielle E. Gaines.

Hogan gave one last hearty farewell before signing off, then repaired to the second floor of the State House where dozens of current and former members of his administration were assembled to witness the unveiling of his portrait.

In the official portrait, painted by impressionist Cedric Egeli, Hogan stands in front of the Palladian windows of Government House, with the State House dome in the distance.

Earlier in the day Tuesday, workers removed scaffolding that surrounded the dome during the restoration process and re-raised flags above the State House, signaling the project’s completion.

Hogan said he was humbled to take part in a centuries-old tradition of governor’s unveiling official portraits and hoped his portrait “will serve as a reminder of just how consequential these past eight years have been and as a reminder of how much our team has overcome and accomplished.” 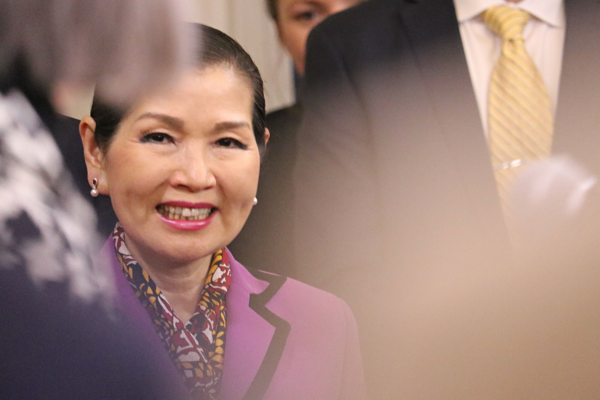 The governor noted that his portrait includes his signature purple tie, a nod to bipartisan efforts and Maryland’s reputation as a “state of middle temperament.”

Elaine Rice Bachmann, the Maryland state archivist, said Hogan’s is the only official governor’s portrait to be set in the governor’s mansion and is the only to include an image of the State House dome, “which is fitting as it is under his leadership that this iconic architectural feature of our national historic landmark – turning 250 years old this year – has been restored.”

Hogan said he chose the setting because he and the first lady “were just in awe every day and every night as we walked past those windows and looked across at the dome.”

He encouraged everyone to take a moment to savor the view of the now-gleaming dome. “It’s more spectacular and more beautiful than ever before,” Hogan said.

The governor closed his remarks with a familiar refrain, this time cast with a bit of nostalgia and emotion: “God bless you and God bless the great state of Maryland.”