With high-ranking state officials moving on and a new generation of leaders coming in, it’s one of the telltale signs of the peaceful transfer of power — and that’s especially so when the incoming and outgoing leaders get together for unveiling ceremonies.

On Thursday, a cast of characters from every corner of the state came to the capital to toast the 36-year political career of outgoing Comptroller Peter Franchot (D) — and see his newly painted portrait. Hours later, the Senate Judicial Proceedings Committee unveiled a new portrait of an even more venerated Marylander, the late U.S. Supreme Court Justice Thurgood Marshall.

And next week, a portrait of outgoing Gov. Larry Hogan (R), which has been hanging in the governor’s mansion since last spring, will be re-unveiled in the Governor’s Reception Room in the State House — even though a portrait of his predecessor, former Gov. Martin O’Malley (D), is not yet on display.

Franchot’s unveiling was part of a bigger celebration at the Calvert House, across State Circle from the State House. Franchot, 75, has spent the past 16 years as comptroller and previously served two decades in the House of Delegates.

More than the bold-faced political names, what was noteworthy about the gathering was the diversity of the crowd, a testament to Franchot’s ability to attract an unusual assortment of fans from a variety of places and backgrounds, a testament to his having spent two decades traveling the state, visiting small businesses, community leaders and Democrats in outposts who don’t often get a lot of attention. Franchot served 20 years in the legislature representing the most liberal district in Montgomery County — and maybe in the state — but became a fiscal conservative (he would say watchdog) who gradually felt more comfortable politically in rural areas and eastern Baltimore County than he did on his home turf.

Moore said that campaigning for the Democratic gubernatorial nomination in 2021 and 2022, he would often ask Franchot supporters why they were sticking with him.

“His courage, his integrity, and he shows up,” Moore recalled being told. “He shows up. People understate how important that is.”

Moore added: “I got a lesson in how omnipresent the comptroller is when every place that I would go to, they would have his coins.”

That was a reference to the commemorative gold coins that Franchot has handed out for years.

Moore said that at a Democratic picnic in Howard County he planned to jab Franchot for being in elective office for so long. But before he spoke, Franchot, he said, praised Moore to the crowd and then fished into his pocket to present him with a gold coin.

“What am I supposed to say [after that gesture]?” Moore recalled thinking. “Well played, Mr. Comptroller.”

Cardin, with mock horror, expressed disappointment with the ubiquity of the souvenirs.

“I thought it was a rare coin,” he said.

But the coins have figured so prominently in Franchot’s political identity that his portrait, made by painter Carolyn Egeli, who until recently lived and worked in St. Mary’s County, features the comptroller holding one in his hand. A photo on the cover of a new glossy book titled, “Onward & Upward: A Record of Leadership and Accomplishments of the 33rd Comptroller of Maryland” also has Franchot holding a coin.

Hogan, who often teamed up with Franchot to tweak the state’s Democratic establishment, called Franchot “a great Marylander.” He also praised the comptroller’s staff, joking: “Much like the artist, they all went to great lengths to make him look good.”

Franchot, before the picture was unveiled, said, “I’m told it’s very handsome. Hopefully, it’s of me.”

The likeness, in fact, was very good. And Franchot, by his own account, was “misty-eyed” through much of the proceedings, saying he felt, “an unmeasurable feeling of gratitude to the people of Maryland.”

Hogan’s portrait was made by Carolyn Egeli’s brother, Cedric Egeli (their father, Bjorn Egeli, was an even more famous portrait painter, whose subjects have included Presidents Eisenhower and Nixon, the late General Douglas MacArthur, and, in Maryland, the late House Speaker Thomas Hunter Lowe). It will be formally unveiled in the State House on Tuesday, even though it has been hanging in Government House since last May. Hogan is also expected to make a farewell address that day.

Governors’ portraits hang next to one another in the Governor’s Reception Room on the second floor of the State House, and the portraits of first ladies are displayed in Government House, the governor’s official residence. But while portraits of O’Malley, who left office in 2015, and his wife, retired Judge Katie Curran O’Malley, have been painted, the O’Malleys have never released them to the state, according to Elaine Rice Bachmann, the Maryland state archivist.

There is no love lost between O’Malley and Hogan, so the widespread assumption is that O’Malley is waiting for Hogan to leave office before agreeing to a public unveiling ceremony.

The hanging of Hogan’s portrait will mean the painting of former Gov. J. Millard Tawes will exit the reception room. Whenever O’Malley’s portrait goes up, another shuffling will occur, with O’Malley’s placed in between Ehrlich’s and Hogan’s and former Gov. Spiro Agnew’s painting removed from the room.

The Marshall portrait that was unveiled Thursday evening in the lobby outside the Senate Judicial Proceedings Committee hearing room was made by Ernest Shaw, an artist from West Baltimore. Modeled on a photograph that first appeared in the Baltimore Afro newspaper, it depicts a young Marshall in 1935 after winning a case before the Maryland Court of Appeals, Murray v. Pearson, that desegregated the University of Maryland Law School. 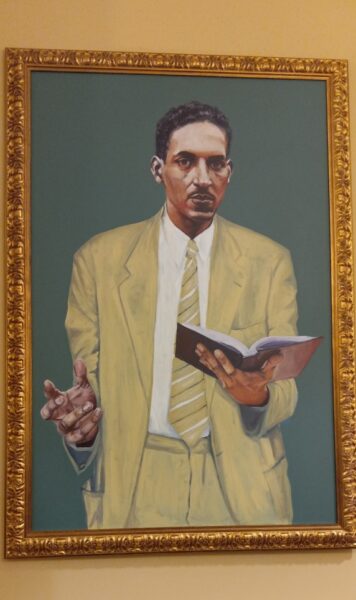 Committee Chair Will Smith (D-Montgomery) said he was inspired to push for a portrait of Marshall, who grew up in Baltimore, after Senate President Bill Ferguson (D-Baltimore City) arranged to hang the portrait of the late Sen. Verda Welcome (D), the first Black woman senator in Maryland, in the Senate chamber. Smith and others raised money to commission the portrait, which joins pictures of George Calvert, the first Lord Baltimore, and former state Attorney General Joe Curran (D) — himself a former chair of Judicial Proceedings — in the lobby.

Smith conceded that the Marshall portrait is a symbolic gesture, but one that carries great importance.

“Symbols really do matter,” he said. “Symbols won’t educate the uneducated, feed the hungry or house the homeless. But they make public spaces more welcoming for people who don’t always feel welcome.”

Larry Gibson, a professor at the University of Maryland Carey School of Law and political godfather to many Black elected officials in the state, said the portrait of Marshall, who he called “the most important lawyer of the 20th Century,” was meant to capture “a particular moment in that young career,” and one that would be especially relevant to Marylanders.

Shaw, the artist, said he didn’t consider the significance of the painting until he started creating the work.

“I kept thinking, I can’t let Thurgood Marshall down,” he said. “We’re from the same part of Baltimore. You can’t really get the scope of how important a project like this is until you’re in the middle of the process.”