By Jenna Bloom and Danielle Hodes

Five socially conservative school board candidates in Maryland who were leading just after Election Night ended up losing when the counting of mail-in and provisional ballots was concluded this week.

Those changes meant that 20 of the 41 socially conservative candidates identified by Capital News Service came out ahead in their races, down from 25 right after last month’s election, according to unofficial results posted on the Maryland Board of Elections website.

Still, nearly half of the conservative board candidates ended up ahead in a state where a Democrat, Wes Moore, won the gubernatorial election by more than 30 points to become Maryland’s first Black governor.

Conservatives won school board races throughout much of the state, with the largest number elected in Wicomico County, followed by Harford, Baltimore, Carroll and Washington counties.

But the five social conservatives who fell behind after mail-in and provisional ballots were counted were:

On election night, 25 socially conservative candidates appeared headed to victory. But that was before the final count of mail-in and provisional ballots, which had to be done after Election Day under Maryland state law.

Gov. Larry Hogan (R) vetoed a measure that would have allowed the earlier county of mail-in ballots. As a result, some Maryland counties didn’t report final results until this week. 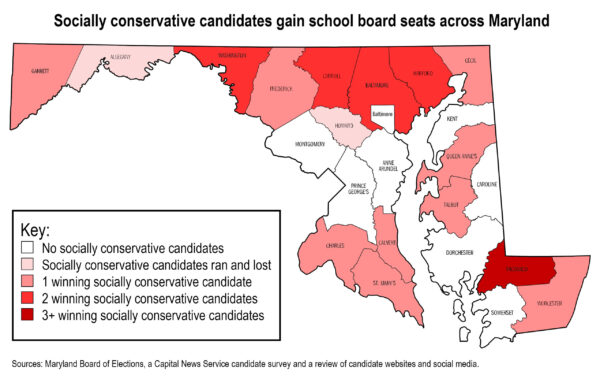 She wants schools to focus on basic subjects and avoid anything students ought to learn at home.

“We need to let our parents do the moral guiding,” she said. “My kids are my kids, and I don’t want someone teaching them a moral or or anything about sexuality before I have a chance to teach it to them.”

“If it needs to be hidden, then why does it need to be taught?” she asked.

Not surprisingly, the right-leaning candidates saw the most success in conservative parts of Maryland.

Overall, they found seats on the school boards of 14 counties across the state, ranging from Garrett County in Western Maryland to Worcester County on the Eastern Shore.

But social conservatives weren’t even on the general election ballot in three of the state’s largest population centers: Baltimore City, Montgomery County and Prince George’s County.

In Frederick County, a conservative “Education Not Indoctrination” slate campaigned on taking a close look at the district’s curriculum.

“School boards have been abdicating their responsibilities and duties to do what is best for a child’s education,” Cindy Rose, a member of the Education Not Indoctrination slate who lost her bid for a school board seat in Frederick County, said in response to a CNS survey. “There is too much focus on emotions, sexuality, racial division and political activism. I want to remove all of that from the classroom. These are family topics of discussion, not government school discussions.”

Four board members were elected in Frederick County, with only one from the Education Not Indoctrination slate: Nancy Allen.

One of the other winning candidates, Rae Gallagher, said she didn’t share the concerns of the Education Not Indoctrination slate regarding the district’s curriculum as well as the books available in school libraries. Now, though, she said it is time for board members on opposite sides of those issues to get past their differences.

“I think any of us who are on the board or in elected positions have to be really aware of some of the polarizing discussions that happened throughout the election cycle,” Gallagher said in an interview. “And we have to work together and be able to listen to all of those views. … But ultimately for the board, we need to come together and make the best decisions for our schools and for our kids.”

In Wicomico County, four candidates ran on an Education Not Indoctrination slate and two of them won: Susan Beauchamp and Kristin Hazel. So did conservative candidate John Palmer, who wrote in the Capital News Service survey that he has “deep concerns about the way U.S. history is being changed and deleted by the woke movement.”

An incumbent, Palmer finished more than 18 percentage points ahead of Jake Blank, an Education Not Indoctrination candidate.

In an interview, Arvi said that moderate voices on the board will outnumber the three conservatives elected this week. Arvi also noted that most of the district’s funding comes from the state, as do the parameters of the schools’ curriculum, thereby limiting the board’s power.

“I think most of the candidates are moderate once they go on the board because the board itself does not have a lot of leeway,” Arvi said.

Michael Guessford, a conservative candidate who joined the Washington County school board in 2018 and won his reelection Tuesday, credited the COVID-19 pandemic with getting more parents to take a closer look at what was happening in local schools.

In the Capital News Service survey, Guessford indicated that he wanted a committee of parents to review all books present in school libraries.

But other candidates are wary of allowing parents to have too much control over what’s happening in the schools. Among those candidates is Samay Singh Kindra, who fell three points short of his opponent, Brenda Hatcher-Savoy, in Baltimore County’s District 4.

“I think that it’s hard to address parental rights as a topic because that encompasses a lot,” he said in an interview. For some people, “that means more transparency with the board of education in terms of just being communicative. For others that means parents getting a say directly over curriculum of every subject, and that’s something that obviously I’m not in favor of. We have a board of education in the school system for a reason.”

An unofficial spokesman for account holders of Maryland 529, the state’s troubled college tuition payment fund, told the agency board Monday that its recent…