The next phase of Frederick County’s relatively young experiment with charter government began on Monday, with the swearing-in of new County Executive Jessica Fitzwater (D) and the seven members of the county council.

Fitzwater, 39, becomes the second county executive in Frederick history, taking over from Democrat Jan Gardner, who was termed out after eight years on the job. Frederick is the only county in the state to have elected women as county executives back-to-back — though Baltimore City had three women serve consecutive terms as mayor from 2007 to 2019.

Frederick switched from a county commissioner form of government to one with an executive and a council in 2014, and Fitzwater, during her inaugural address Monday at the Weinberg Center for the Arts in downtown Frederick, made note of the history. An elementary school music teacher and teachers’ union leader, she was elected to the council that year.

“We spent eight years not just governing but building a new form of government from the ground up,” Fitzwater told the capacity crowd in the historic theater.

Over the past few decades, Frederick has gone through a tremendous transformation, morphing from a rural, conservative bastion into a more polyglot, cosmopolitan jurisdiction that is growing at a rapid clip and attracting more development. It is also increasingly voting Democratic — though it still has conservative pockets.

After getting through a competitive three-way Democratic primary, Fitzwater defeated state Sen. Michael Hough (R) by just 989 votes in the general election, 50.4% to 49.46%. Hough campaigned with a warning that Fitzwater and her allies were determined to turn Frederick into “Montgomery County North” — a loaded phrase with multiple interpretations.

But Fitzwater touted a development blueprint called the Livable Frederick Master Plan, which the county government adopted in 2019 but has been slow to implement due to the COVID-19 pandemic. On Monday, she described Livable Frederick as “award winning” and “the best master plan” in Maryland. She said one of her top goals as executive would be to fully “operationalize” the development guidelines and align county budgets with the document’s policy goals.

Like other county executives beginning new terms Monday — both the newcomers and the holdovers — Fitzwater vowed to lift the county out of its final doldrums brought on by the pandemic. She praised Gardner and her former council colleagues for laying “an incredibly strong foundation for the years to come” despite the public health and economic challenges posed by COVID.

Fitzwater said she would be guided by “three core values: inclusion, sustainability and accountability.”

“Diversity, equity, inclusivity and belonging will not just be buzzwords in our administration,” she said. “They will be a lens and a guiding principle.”

Because the county executive race wasn’t called until Nov. 18, Fitzwater is putting together her new administration on the fly.

But she’s no newcomer to county government, and has clearly imagined a progressive agenda. She said tending to the needs of the county’s most vulnerable residents would be a hallmark of her administration.

“There are still too many Frederick County families that are being left behind,” Fitzwater said, promising to push for big improvements in education, transportation, child care, housing and technology that lifts up communities of color, struggling seniors and neglected rural communities. “In my first term as county executive, we are going to make housing more attainable,” she said.

Fitzwater’s personal life and political story has been shaped in many ways by the sudden and unexpected death of her husband Gerald Bigelow, in 2019, leaving her with a small child and a baby on the way.

“It was traumatic and something that no one can prepare for,” Fitzwater told the crowd Monday, adding that it served as a reminder that “the train can come off the tracks for anyone.”

“This experience has made me even more committed to a Frederick County where we address disparities head on,” she said. “…We will meet this moment with tenacity and grit, hope and purpose, that will propel our county further…Let’s get to work!”

County council with a variety of agendas and personalities

Fitzwater will be working with a county council with five Democrats and two Republicans — a Democratic supermajority.

The council features three holdovers and four newcomers. Two of the three veterans — Democrats Jerry Donald and M.C. Keegan-Ayer — entered county government with Fitzwater in 2014 and are starting their third terms. The Republican holdover is Steve McKay, entering his second term.

Each councilmember was afforded an opportunity to speak after being sworn in, and they revealed an array of priorities and talking points. McKay and the other Republican, Mason Carter, signaled that they’re ready to serve as counterweights to Fitzwater’s agenda.

“Some people are hailing the fact that Frederick is one of the fastest-growing counties in the state,” McKay said. “Personally, it makes me cringe a little.”

Carter, a MAGA-style Republican who is making history, having just been elected at the age of 18, decried a society that, in his words, handcuffs the police and frees the criminals. 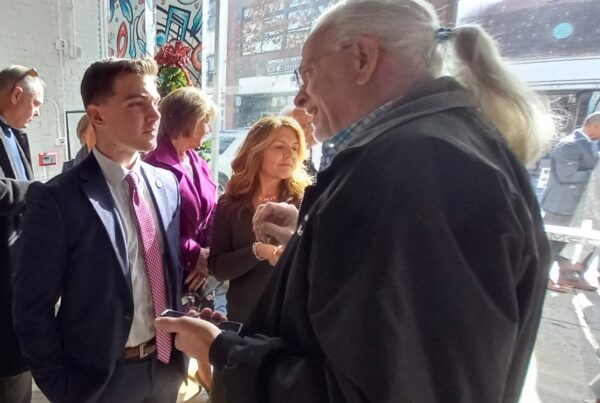 18-year-old Frederick County Councilmember Mason Carter (R) chats with a constituent at a reception following the swearing in of the new county executive and county council on Monday. Photo by Josh Kurtz.

Also making history is newly sworn-in County Councilmember Kavonte Duckett (D), the first African-American elected to a county office in Frederick. “Let’s leverage our diversity and build on our similarities,” he told the crowd.

The other council newcomers are Democrats Renee Knapp and Brad Young. Young, who spent a dozen years on the Frederick County Board of Education, is part of the expansive Young political dynasty in Frederick, the son of retiring state Sen. Ron Young (D), who is stepping away from a political career that began in the 1960’s.

Swearing in each officeholder was Sandra Dalton, the Republican clerk of the Frederick County Circuit Court. She positioned each official and their families just so, to ensure that they’d be seen by photographers and the audience, cooing over each small child. Dalton said she was inspired to hear most of the county officials reach out to voters who had not supported them.

“Elected by some but to serve all,” she said. “If they stay by that, I think we’ll be in really good hands, don’t you?”

Woke has become a caricature of aspects of leftist (mostly social media) discourse used to smear those of us who are advocating more radical politics.