Last fall, Wes Moore’s own polling showed that he was the choice of just 7% of Maryland Democrats. He was a middle-of-the-pack candidate with low name-ID who was hoping voters would elect him governor despite his lack of experience in politics.

On Wednesday morning, Moore woke up the state’s governor-elect.

How did the best-selling author and former non-profit CEO propel himself to victory? Moore himself called it “an improbable journey” during his election night speech.

The full story will emerge over time, of course. But close observers of the just-concluded contest point to about a half-dozen significant factors and moments that fueled Moore’s improbable — and historic — rise.

Almost as important as his accomplishments, Moore combined superior communications skills with an ability to win a room — gifts even his rivals acknowledged. Whether practiced or authentic, he quickly established himself as a one-voter-at-a-time style of campaigner, capable of giving a rousing speech (without notes), then plunging into a crowd and turning on the charm. If Maryland has seen anyone like Wes Moore before, it was a long time ago.

“Wes is an extraordinary person,” said former Secretary of State John Willis, a former boss of future first lady Dawn Moore’s. “The politicos kind of [overlooked] the fact that the guy’s been a success at everything he’s done.”

It wasn’t that Moore was a complete unknown. Through his books, his business career and his philanthropy, Moore was known in certain Maryland circles and had amassed a devoted collection of admirers. Through his wife, Dawn Flythe Moore, who worked for the past two Democratic administrations in Annapolis, he had some connections to political leaders. And he’d been encouraged to run for office before — for mayor of Baltimore and for Congress after longtime U.S. Rep. Elijah Cummings (D) died.

“He has the ability, the intellect, the drive, the determination, the discipline, the focus, vision, all of those personal qualities, he had,” added Willis, former Gov. Parris Glendening’s longtime strategist. “And he worked very hard — from 7 in the morning until 10 at night, for a year. When you meet Wes, you remember Wes.”

The 2021 survey by Garin-Hart-Yang Research Group — the one that had Moore, their client, in single digits — had Comptroller Peter Franchot in front, with 20% of Democrats behind him, followed by former Prince George’s County Executive Rushern Baker III at 12%. Those numbers notwithstanding, the firm’s polling memo insisted that “Moore is in a competitive position and shows strong potential to win the primary once he increases his profile.”

The claim was buttressed by the fact that Moore had the lowest statewide name recognition of any of the candidates, suggesting that he had more room to grow than his rivals — provided he could reach enough voters with his life story.

“While we expect Wes to run strongly with voters who know him, these results are very encouraging because they confirm that as more Marylanders get to know Wes’ powerful life story and impressive agenda as governor during the course of the campaign, the more his support will grow,” the pollsters wrote. That boast — while common in such memos — accurately foreshadowed the remaining 14 months of the contest.

For his part, Moore said his campaign picked up a crucial boost when Aruna Miller agreed to be his running mate. Moore told Maryland Matters he has a “deep level of respect and admiration” for Miller, a longtime traffic engineer and former two-term state legislator from Montgomery County. 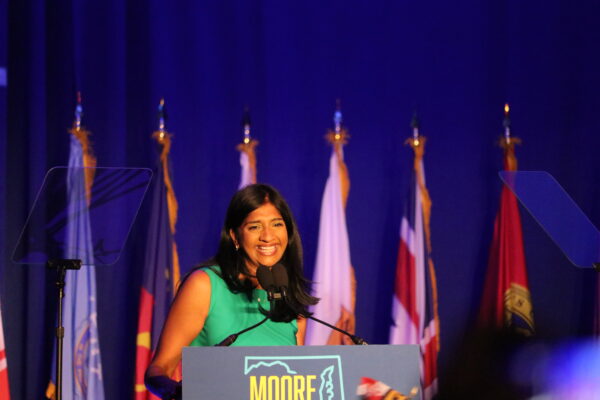 Democrat Aruna Miller, who will be the first immigrant and woman of color to serve as Maryland’s lieutenant governor, celebrates on Tuesday night. Photo by Danielle E. Gaines.

Moore said he “slept pretty easily” after Miller agreed to join the ticket.

Miller, 58, brought additional fundraising acumen to the campaign, as well as her broad political and social network.

When sworn in, she will become the first immigrant and the first woman of color to serve in Maryland’s lieutenant governor role.

Moore was able to convince many of the biggest names in the state to vouch for him during the primary, most notably U.S. House Majority Leader Steny Hoyer, Prince George’s County Executive Angela Alsobrooks, state House Speaker Adrienne Jones and state Senate President Bill Ferguson.

At a well-attended press event, Hoyer called Moore “a young and dynamic leader, full of vigor and vision, who is ready to take his boundless energy — and a common sense borne of experience — and use it to invigorate our economy, our people, and our sense of possibility.” The long serving Hoyer held multiple events for Moore throughout Southern Maryland; the candidate went on to finish first in Charles and second in Calvert and St. Mary’s. 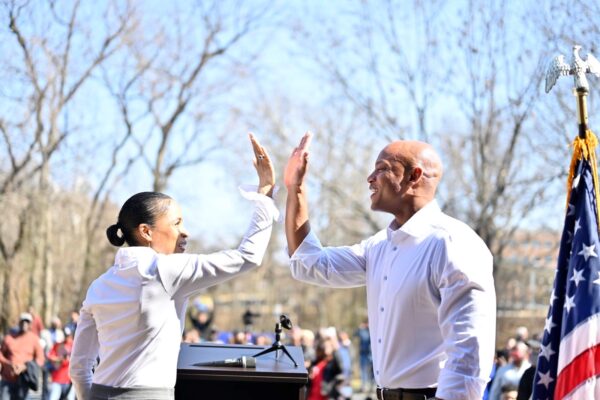 Alsobrooks called Moore “the leader we need in this moment,” a candidate with “the vision, integrity, and the ability to move our state forward and deliver for families in Prince George’s County and across Maryland.” Moore finished first in vote-rich Prince George’s, amassing twice as many votes as his nearest rival.

In a statement, Jones said Moore “has the fortitude, lived experience, and motivation to lead us into a new era of equity, opportunity, and achievement for all Marylanders.” Moore went on to finish first in Baltimore County, attracting 5,000 more votes than Franchot, whose strategy ran through the Baltimore suburb. Anne Arundel County Executive Steuart Pittman was another early endorser, and Moore finished first there as well.

Perhaps Oprah Winfrey’s endorsement of Wes Moore belongs above. Perhaps it deserves to stand alone. Because for all the benefits the political endorsements brought Moore, they may have been eclipsed by the backing he received from talk show host and business mogul Oprah Winfrey. 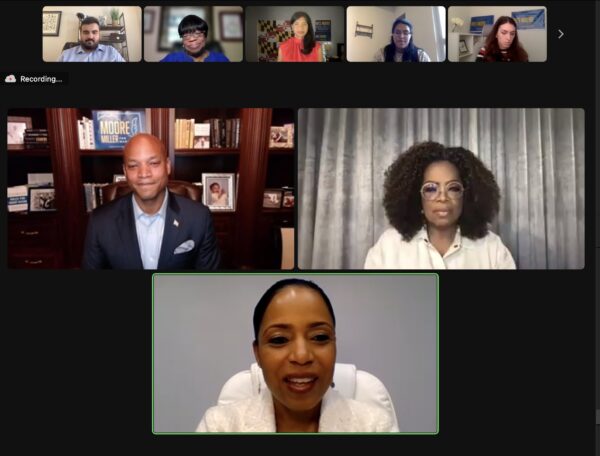 She hosted an online event for Moore in June and cut ads for him in July, the events serving to boost the candidate’s profile and war chest.

Pollster Patrick Gonzales said celebrity endorsements might not translate immediately into votes, but they’re door-openers. “That’s a thing that penetrates down” to the electorate, he said. “It doesn’t close the deal, but it opens the door.”

Strategist Len Foxwell called Winfrey “one of the most powerful brands on earth.” Her endorsement provided “an enormous confidence-booster for Wes’s base and an eye-opener for [voters] who were on the fence.” (Foxwell served as Franchot’s chief of staff for a decade and did consulting work for Baker and former Attorney General Doug Gansler during this year’s campaign.)

As Moore’s fundraising took flight and his standing in the polls started to move, he was the beneficiary of an enormous gift: Baker’s withdrawal from the contest in June, roughly six weeks before the primary.

Although his polling consistently showed him within striking distance of Franchot, it appeared that his lack of money doomed his chances of overtaking the frontrunner during the home stretch, when resources matter most. County leaders from Prince George’s who had aligned themselves with Baker were suddenly up for grabs, and they moved to Moore as one.

“If Rushern hadn’t dropped out, Tom Perez would be the nominee,” said Gonzales. “There were a lot of Black voters in this state that wanted to vote for a Black candidate, understandably, and… all of a sudden they didn’t have to make a decision between a new, attractive, fresh face [and] a proven leader.”

Moore needed every vote from Prince George’s, a traditional Democratic stronghold, that he could get. Perez picked up an eye-popping 67,657 votes in Montgomery County and finished a close second on primary night, just 15,000 votes behind the winner. “Wes Moore’s primary victory was the closest in a Democratic primary since 1966,” said Foxwell. “The seminal moment in the Democratic primary was Rushern Baker suspending his campaign.”

For much of the last eight years, Maryland’s Republican governor, Larry Hogan, and its Democratic comptroller, Franchot, had a public partnership that benefited both men. Hogan used it to position himself as a “no labels” problem-solver, while Franchot openly courted the centrist Democrats and pragmatic Republicans who supported the governor.

But Franchot seemed to run out of gas at precisely the wrong time. Although he pledged a year ago to run “like a tiger,” the 74-year-old’s campaign — though well-funded — lacked spark. That left Moore an opening. He and Perez both overtook the longtime frontrunner at the finish line.

When the Democratic Governors Association ran ads during the Republican primary, ostensibly to raise alarms about Republican Dan Cox’s ties to Donald Trump, their true goal was broadly understood — to let the GOP base know that Cox was (wink, wink) solidly aligned with the former president. Cox may have prevailed without the DGA’s support. In any event, he overtook Hogan’s choice, former state Commerce Secretary Kelly Schulz, with relative ease.

For many November voters, however, his election-denialism was disqualifying. Moore had an easy time dispatching with Cox, whose home-brewed campaign lacked resources and failed to offer the sort of sustained, centrist messaging that helped carry Bob Ehrlich in 2002 and Larry Hogan in 2014 and 2018.