In a video that surfaced over the weekend, a top Peroutka aide encouraged supporters to arrive two hours before the polls close on Tuesday, Nov. 8.

“Vote on November 8th as late in the day as possible,” said campaign coordinator Macky Stafford. “If everyone could stand in long, long lines at 6 o’clock, that would actually help us.”

The video was obtained by WBAL-TV reporter Kata Amara and was immediately denounced by the Maryland Democratic Party, which issued a news release that accused Maryland Republicans of “plotting to create chaos and laying the groundwork to challenge the upcoming election.”

“Legitimate campaigns do not attempt to orchestrate ‘long, long lines,’ divert volunteers to police drop boxes in the middle of the night, or focus on pushing hand count audits while votes are still up for grabs,” said spokesman Ernest Bailey. “These latest developments underscore the importance of soundly defeating [Republican gubernatorial hopeful Dan] Cox and his allies up and down the ballot.”

Stafford said in an email that she would do an interview if a reporter emailed questions ahead of time. After a reporter emailed a question, Stafford refused to make good on her pledge. “We are expecting historic numbers to turn out to vote for Michael Peroutka for Attorney General this election, hence the long lines,” she wrote, declining to explain why late-voting would advantage the controversial candidate.

Maryland voters have several options this year. They can vote by mail or they can vote in-person during the early voting period (through Thursday at 8 p.m.) or on Election Day (Nov. 8). As of Sunday night, a record 623,772 voters had requested a mail-in ballot.

In a email to supporters — whom she dubbed “Freedom Lovers, Truth Warriors & Soon-to-be-Winners” — on Monday, Stafford cautioned against using the state’s 96 early voting centers. 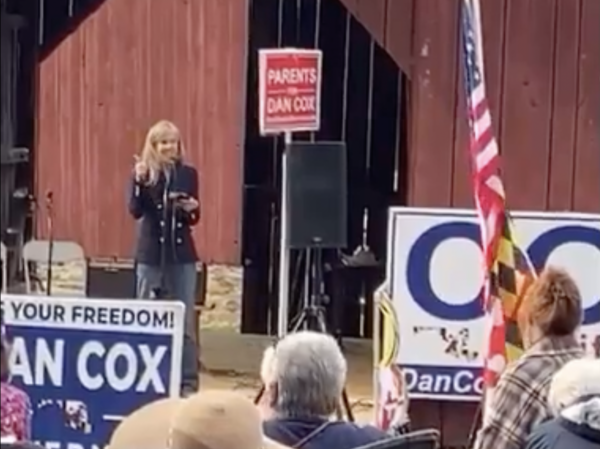 “No early voting, spread the word!!” she wrote. “The attorneys helping us have advised us all to vote as late in the day on Tuesday the 8th as possible. Let’s all pray we wait in historically long lines and while we are standing in line, inform fellow voters to only vote on paper once in the polls: no touch screens!”

Distrust of elections has morphed from the fringes of GOP thought into the mainstream.

Although he is being badly outspent by Democrat Wes Moore, Cox has spent nearly $27,000 on lawyers to wage a legal battle against the Maryland State Board of Elections, which wanted to count mail-in ballots as they came in, rather than wait until after Nov. 9. The state’s highest court ruled in favor of the elections board.

The Baltimore Sun reported earlier this month that a Cox-aligned group which has raised false claims of vote fraud is recruiting volunteers ahead of Election Day. The group’s outreach suggests it intends to conduct a citizen-led audit or recount of the election, which would appear to fall outside state law. Hogan sought to distance himself from the effort, saying Maryland “had no issues or problems whatsoever” with the 2020 election. “I don’t think that makes any sense,” he said.

Cox, an attorney, spent time in Philadelphia after the 2020 election hoping to uncover evidence of wrongdoing in the balloting there. His preferred candidate, then-President Trump, lost Pennsylvania to Joe Biden, tipping the election to the Democrat. He has recently encouraged supporters to stake out ballot drop boxes overnight, to catch people engaged in “nefarious activity” in the act.

For his part, Peroutka conducted an interview on a program called “American Medicine Today,” which airs on the right-wing Newsmax network. He said White House COVID-19 advisor Dr. Anthony Fauci “profited personally” from grants his agency receives and he called the pandemic an “obnoxious” attempt to harm Trump politically. He pledged to “impanel grand juries” to prosecute Fauci for “treason” and “acts of war” if elected attorney general.

The interview, which was posted on Saturday, had been viewed 35 times as of Monday afternoon.