Thursday was a brilliant fall day — perfect for voting.

But turnout on the first of eight days of early voting in Maryland was predictably modest. The State Board of Elections reported on Thursday evening that 44,920 voters had cast their ballots at one of the state’s 96 early voting centers. Early voting turnout tends to get a bump on the weekends and in the final hours of the final day, which is Nov. 3 this year. Election Day is on Nov. 8.

“It’s exactly what I would expect,” said John Connole, the chief election judge at the North Carroll High School Library Complex in Hampstead, at midday. “It’s light but steady.”

Many of the Maryland voters who cast ballots on Thursday said they did so to get in ahead of the crowds. Others said they wanted to cross the task off their to-do list.

Voters at both ends of the ideological spectrum expressed regret that term-limited Gov. Larry Hogan (R) could not run again.

Many early-bird voters showed up at early polling places with campaign literature in-hand. Most steered clear of the campaign workers they encountered en route to the building. State elections personnel reported no major problems on opening day.

This year’s election will determine who succeeds Hogan, Comptroller Peter Franchot (D) and Attorney General Brian Frosh (D). U.S. Sen. Chris Van Hollen (D) is seeking a second term against token opposition and all eight U.S. House seats are up, as are all 188 seats in the General Assembly and hundreds of local positions throughout the state. Several statewide ballot questions, including one that would allow for the recreational use of marijuana, are on the ballot.

At early voting centers in Landover, Chevy Chase, Germantown, Baltimore City and Hampstead, a light but steady stream of voters could be seen throughout the day. There were fewer signs or campaign volunteers than there were during the July primaries — proof that the most competitive races in those jurisdictions were during the primary. 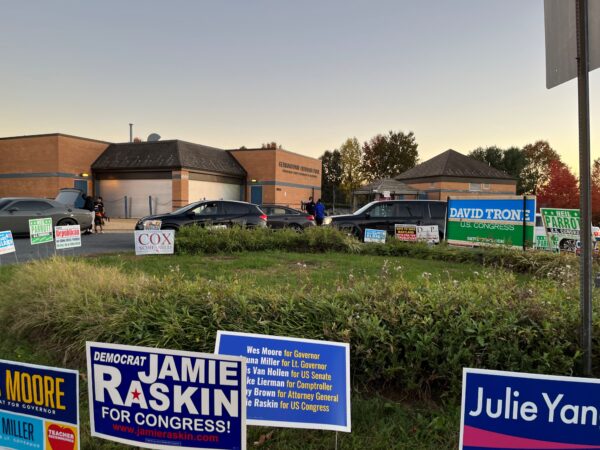 At the Wayne Curry Sports and Learning Center in Landover, voters cast ballots at a facility named for Prince George’s County’s first Black county executive. Polls suggest that Democrat Wes Moore, who is battling Del. Dan Cox (R-Frederick) and three others, could become the state’s first Black governor, but voters said that was not a factor in their decision-making.

“It’s not a Black thing with us,” said one Black voter. “It’s really about what you’re saying you’re going to do for the people.” Said the woman’s husband: “You choose the best candidate that’s qualified, that can do the job.” (The woman volunteered that she wished Hogan could seek a third term. “I hated to see him leave,” she said. “I love the man.”)

Voter Carol McCreary-Maddox called Moore “a shining star” and a “go-getter.” But she said many Black Americans believe the election of Barack Obama led to a “backlash” among some White voters, causing feelings of trepidation now. “We need him to win, but I’m not sure where our country is,” McCreary-Maddox said.

By contrast, the polling place in Hampstead, where the aroma from the Fuchs North America spice factory across the road filled the air, was Cox country. The Republican is hosting a “One Nation Under God” event in the Carroll County town on Friday afternoon.

Two retirees who drove to the polls together, Martha Hyson and Katherine Planthought, voted for Cox — though Hyson did so very reluctantly. Hyson also described herself as a fan of Hogan’s.

“Gov. Hogan has done a lot for Baltimore City and doesn’t really get a lot of credit for it,” she said. “I listen to WBAL Radio every day.”

Hyson said she agrees with many of Hogan’s criticisms of Cox, including that Republicans aligned with former President Trump tend to focus on distractions rather than offering solutions to real problems. And she said she’s “very disappointed with the people in charge” who enabled Cox to win the Republican primary.

But in the end, Hyson said, she could not cast a vote for a liberal Democrat.

Planthought agreed that Cox was not her idea of a perfect candidate, but said she was happy to vote for the Republican anyway. Looking to national congressional elections, she said her biggest fear was that, “Whenever the Republicans get in office, they start fighting amongst themselves.”

A woman who identified herself as Kay was outside the polling place, wearing a blue Cox T-shirt and handing out literature, as her two home-schooled children rode by on scooters.

“A good civic lessons for the kids,” a passer-by observed. Kay agreed.

Kay said she and her husband are enthusiastic Cox supporters because as Catholics, “we always vote pro-life. That’s the most important issue for us.”

In conservative territory like Carroll County, one of the most heated elections this year is for three seats on the Board of Education. One of the incumbents, Tyra Battaglia, who has fought for parents’ rights and against mask mandates in the public schools, was outside the polling place in Hampstead, handing out literature for her “BMW” slate, so named because the candidates’ last names are Battaglia, Miller and Whisler. According to Battaglia’s flier, she and her teammates are running against “other, far-left, union-backed candidates.”

A woman driving away from the voting center opened her window and shook her fist in support of Battaglia.

“Keep that school discipline!” the woman yelled. Battaglia waved and thanked her for her vote.

Turned off by Cox’s call for drop-off box observers

Asked about the gubernatorial race, several voters in the Washington, D.C., suburbs expressed alarm about Cox and statements he has made about the 2020 election. Cox, an attorney, spent time in Philadelphia after that election seeking to buttress the former president’s fraud allegations. He also has raised questions about balloting in Maryland.

Signs opposing the ballot question that would impose term limits on Baltimore City officials on a hillside near the Mt. Pleasant Church and Ministries early voting center in East Baltimore. Photo by Josh Kurtz.

“I could never vote for an election denier,” said Julian Schweitzer, a voter in Chevy Chase. “This is a huge threat to our democracy. I voted for Hogan at one time, (but) not this kook. He’s beyond the pale.”

Voter Richard Moorer, standing alongside his wife, said election deniers “are automatically off our list.”

This week, Cox put out a call for volunteers to “monitor” the state’s elections drop boxes. “It’s no secret that drop boxes are regularly misused and stuffed with nefarious ballots,” he wrote, without offering evidence. “We have to stay alert for the sake of preserving clean elections and keeping individuals accountable.”

Cox included a list of the state’s drop box locations. Volunteers were encouraged to look for “suspicious individuals with backpacks or bags hanging around ballot boxes” and “individuals stuffing stacks of ballots into ballot boxes.” He also warned of people wearing gloves and “abnormal behavior.”

“Don’t just take photos and videos, but ask questions,” he wrote. Monitors were encouraged to submit “possible election fraud” to a “Stop the Maryland Steal” email account. He said the “most crucial time” to keep watch over drop boxes is 8 p.m. to 6 a.m.

Shown Cox’s email, voter Kathy Moorer said: “That’s just nonsense. That’s just plain nonsense.” She said she has seen cameras around drop boxes that would provide “a record” of illegal activity. “We should not be intimidating voters. We should be encouraging people to vote.”

Meanwhile, at two early voting centers in Baltimore City, it was impossible to find anyone voting for Cox. In fact, it was hard to find candidates and campaign volunteers, either, though both places had plenty of campaign signs.

Outside the League for People With Disabilities headquarters, an early voting place on East Coldspring Lane where Moore had voted during the primary and candidates and campaign volunteers were abundant in July, a solitary figure was handing out campaign literature, pulling out pieces one at a time from her shopping cart, in support of the local ballot question that would impose term limits on city officials.

The woman, who did not want to give her name, said business was slow. “Nobody really wants to take any paper home,” she said.

Although she was surrounded by signs opposing the ballot measure, the woman did not seem to mind.

“Nobody’s really being unpleasant,” she said, “because everyone’s entitled to their opinion.”

This fall’s election contest came down to the first of two tie-breakers.