They’re not hugging now, though. Instead, they’re engaged in an increasingly bitter rematch.

“Did Ball and His Staff Knowingly Break the Law?” reads an item under the news section of Kittleman’s campaign website. Another article states “On School Safety ‘Calvin Ball Failed our Kids!’”

Ball is largely ignoring those charges — and trying to tie his opponent to two Republicans who are unpopular with most Howard County voters, President Trump and Del. Dan Cox (R-Frederick), the GOP nominee for governor.

“My Republican opponent is taking a page out of the Trump/Cox Republican playbook and running an extremely negative campaign to distract from quality of life issues,” Ball said in an interview. “I’m really trying to focus on the issues. I think people care more about our records than the rhetoric.”

The fiery campaign shows the two candidates on opposite sides of issues like inflation and the economy, public safety and education funding. Meanwhile, Ball is touting his record and Kittleman is stressing that he’s the “grass-roots” candidate.

Democrats hold a substantial lead in voter registration in Howard County, with 122,194 enrolled Democrats through September compared to 49,372 Republicans. There were also 57,367 nonaffiliated voters. 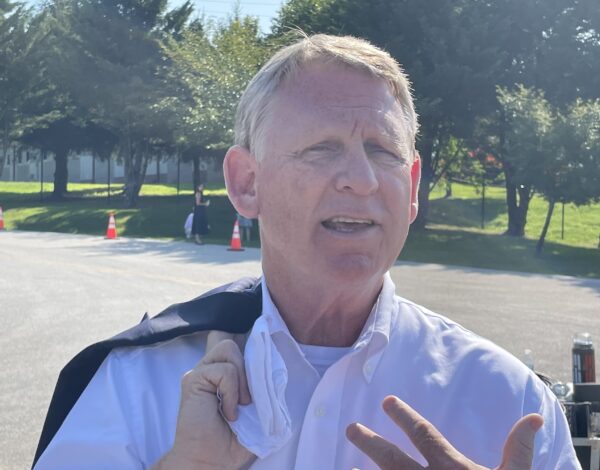 Yet Howard has proven to be a remarkable bellwether in the last two state election cycles. In 2014, then County Councilmember Courtney Watson (D) was considered the favorite for the open county executive seat. But in what turned out to be a bad year for Democrats nationally and in Maryland, Kittleman, who was then a state senator, prevailed, taking 51.2% to Watson’s 48.7%.

Four years later, Kittleman, a rare moderate Republican, seemed like a shoo-in for a second term, but the national political winds were blowing in Democrats’ favor, and Ball, then a member of the County Council, ousted him, 52.8% to 47.1%.

Ball, the incumbent, stresses that he’s proud of the work he has done for Howard County over the past four years. He’s been eagerly touting his accomplishments — specifically the county’s “historic investments in education” — that occurred under his term.

“I’m very proud of our work and I’m hoping that we can continue to build upon our progress in the next four years,” he said.

During Ball’s tenure, the county increased special education funding, educator salaries and school construction funding. This includes the funding to build High School 13, the first new high school in Howard County in over a decade.

“I think County Executive Ball should continue to focus on the achievements of the county over the last four years – the progress, the investments in education, and it being a great place to raise a family and to have a business,” said Ulman.

Ball said he recognized that Kittleman is running a negative campaign about him, although he has not responded to any of the claims or criticism that Kittleman has made against him on social media or on his website.

“I do think when you see one side making significant attacks, it usually indicates that they need to make up ground,” said Ulman. “And when you see somebody stay focused on doing the job and focused on quality of life, it is usually born out of a stronger position.”

Kittleman, a Republican who is running as a self-branded “independent leader,” has centered his campaign on the alleged missteps of his opponent — which, he said, prompted county residents to ask him to run.

“I can tell you that I hadn’t planned on running,” said Kittleman, who had taken a job with state government after losing his reelection bid. “But people from the community came to me.”

Kittleman said that he had been following Ball’s tenure “from a distance.”

According to Kittleman, people came to him with concerns regarding public safety, education, high taxes and costs of living. However, Kittleman said that one of the biggest issues facing the county is school safety. He said he is “very concerned” about the recommendation that Ball made to remove school resource officers from middle schools last April.

“It’s difficult to learn anyway nowadays, but you really have a hard time learning if you’re worried about whether you’re going to be safe in school,” he said.

Kittleman’s “day one plan” would add school resource officers back into middle school. This plan also includes proposals to decrease taxes and support law enforcement, among other policies.

“Allan Kittleman is running a campaign that is based entirely on local issues and on what he can do for the Howard County community. What I’ve seen is that people appreciate that,” said Robert Flanagan, a Republican and former state delegate from Howard.

Flanagan said that, unlike in 2018, Kittleman has decided to keep the scope of issues in his campaign local. Flanagan and Kittleman hope this tactic will resonate with Howard County voters.

State of the campaign

While Ball clearly took advantage of the national Democratic wave election four years ago, there are “a lot of different variables this time that did not exist in 2018,” said Drielak, the political scientist.

“Now we’re dealing more with inflation, which we did not in 2018. The economy is different. We’re also post-COVID, so that’s something that people certainly have on their minds.”

She said she’s not surprised that both candidates have focused on education.

“[There are] quite a number of [concerns] regarding education. Redistricting SROs, public safety, and security,” said Drielak. “There’s also a Board of Education race and they tie in together, which is why I think that comes up with some frequency.”

The rising national crime rate and environmental issues will also likely come up in the race, she said. Locally, there are completely different issues facing the county that Drielak has noticed being brought up fairly frequently.

The two candidates have taken drastically different fundraising approaches — and have strived to make these differences apparent in their campaigns.

“For the first time in our country’s history, we have a public campaign finance program, and I’m the only one using it for the county executive race,” said Kittleman.

Kittleman is referring to the Citizens’ Election Fund, which provides matching county funds to candidates and encourages small donations from voters instead of large donations from developers and other special interests.

“Shifting our fundraising and financial structure from 2018, while we had to actually build the Citizens’ Election Fund for it to be a viable system, it just wasn’t feasible,” Ball said. “I definitely am glad that now Mr. Kittleman sees the light of our program.”

“This is by far the largest grass-roots campaign in the history of our county,” said Kittleman. “We have probably now more than 1,700 individual donors to our campaign.”

Kittleman’s campaign has accused Ball of accepting contributions from certain developers that exceed the legal limit for an election cycle.

Early voting starts on Thursday and will be open until November 3. Early voting is available at polling locations across the county each day from 7 a.m. to 8 p.m.

All posts by Sasha Allen