If enacted, the measure would limit Baltimore mayors, council members and the comptroller to two four-year terms. Smith, who lives in the Baltimore suburbs, where Sinclair’s corporate offices are headquartered, has doled out more than $500,000 from his personal fortune to launch the campaign.

Fox45, in the meantime, has done several reports on the initiative.

In the stories that were available on the station’s website this week, none featured opponents of the measure. Backers of Question K were featured in every segment.

The station did not disclose that Smith is leading the term limits crusade in half of the reports; in the other half, it did.

In one segment, an anchor interviewed activist Dylan Diggs, a term limits supporter who wrote “an article” for the station’s website. He said term limits would bring “new blood” to City Hall.

In a second segment, former Baltimore NAACP president Doc Cheatham Sr. told viewers “it’s time for a change” in leadership. “Just re-electing the same people over and over again,” he said, “does not give other individuals the opportunity to bring their expertise to the table.” In the intro to the Cheatham interview, the anchor told viewers there is “growing support” for term limits, though she did not elaborate.

In a third segment, businessman Bob Wallace, a former Republican who ran for mayor in 2020 an independent, echoed the campaign’s tag line, “OK with Question K.” Wallace said term limits will deliver the “new ideas, new people [and] young people” the city needs.

In a fourth segment, reporter Mikenzie Frost covered a rally sponsored by term limits supporters. She played a sound bite from Jovani Patterson, the Republican nominee for Baltimore City Council president in 2020 (he took 19.5% of the vote) who is leading the campaign that Smith is funding. She also interviewed a political science professor who discussed why voters in Baltimore, a city that has endured violence, under-performing schools and political corruption, might find term limits appealing.

An anchor who disclosed Smith’s funding of Question K then pointed viewers to the station’s running online “poll,” which at that point showed 100% support for the initiative. Frost did not respond to requests for comment.

Donna Rosene Leff, a professor emeritus at the Northwestern Medill School of Journalism, reviewed the stories that were available on the WBFF website as of this week and found them troubling.

The one-sidedness of the stories “crossed a pretty clear, ethical line and should be called out,” she said. Leff called the failure to disclose Smith’s big-ticket backing of Question K in every report “outrageous.”

Historically, Leff said, newspapers and station owners have skewed their coverage of news events to fit their personal political views. Nonetheless, she said, it’s “not considered ethical” for journalists to cover “the pet editorial project” of management without providing the full story.

Reached on his cell phone, Smith declined to comment. “You’re the press? Don’t take this the wrong way, but I don’t talk to the press,” he said.

David Johns, WBFF’s news director, said the station has done many stories on Question K, more than the few posted to the web. Reporters and anchors have disclosed Smith’s involvement “more than a dozen times,” he said.

Asked whether the station has interviewed any term limits opponents, Johns pledged to investigate. 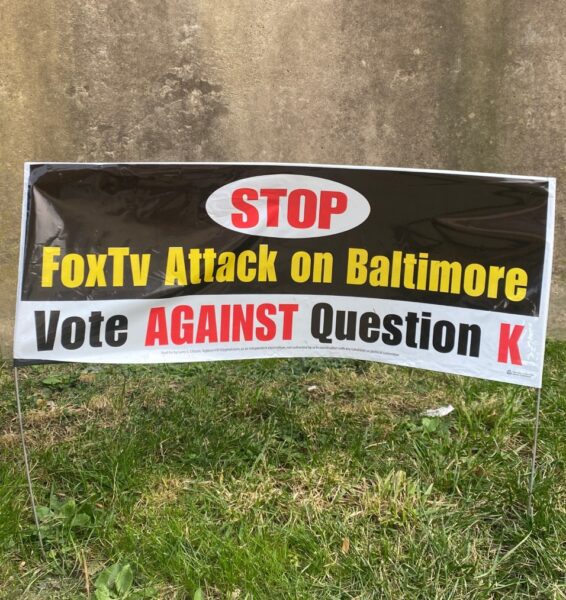 A sign opposing the term limits ballot question that Baltimore City voters are considering. The signs were paid for by Larry Gibson, an old political hand in the city. Photo by William F. Zorzi.

A station employee, speaking on condition of anonymity, said newsroom personnel have pressed for more disclosure and more balanced coverage, but have been rebuffed. “We wanted to put a disclosure in the newscast,” the person said. “We were specifically told we were not allowed to. … We were told ‘no.’”

“We love, in our country, having media put out information, factual information. And it’s supposed to be unbiased,” he said. “When you get to the point where you’re getting asked a question by the media and then the people that [pay] that person are then — now — funding ballot initiatives, that makes a very dangerous slope and it’s something that we should be thinking about.”

Sinclair, which owns more local television stations in the U.S. than anyone else, drew criticism in 2018 when a video of its news anchors went viral for all the wrong reasons.

The video featured news anchors from many of Sinclair’s nearly 300 stations simultaneously reading a message that denounced “fake news,” a phrase made famous by President Trump.

The anchors warned of “the troubling trend of irresponsible, one-sided news stories plaguing our country,” and they accused “some members of the media” of using “their platforms to push their own personal bias and agenda to control exactly what people think.”

(While the video was something of a technological marvel, it rubbed many observers the wrong way. It was variously described as “chilling,” “surreal” and “terrifying,” though Trump leaped to Sinclair’s defense.)

Fox45 has been aggressive in its reporting on Baltimore’s challenges, many of which appear under its “City in Crisis” banner. The station routinely wins prestigious awards for its reporting on the city’s under-performing schools, including recent reports on grade inflation and “ghost students.”

The station has also shone a spotlight on Mosby, who critics say is too lenient on repeat criminals. The station’s reports frequently lead to investigations by government watchdogs.

If Question K passes, most of Baltimore’s elected leaders would be allowed to serve eight years, after which they could seek another post or return to private life. They would be free to run for their old post after being on the sidelines for four years.

Backers say Baltimore will only be able to dig itself out of trouble if there is a regular supply of newcomers. Patterson, head of the Smith-funded People for Elected Accountability and Civic Engagement (PEACE), said voters often stick with incumbents even when they’re dissatisfied.

“We want to see fresh, new faces in our city government,” he said. “(Term limits) are really good guardrails for healthy government.” Patterson declined to identify any elected leaders who have stayed around too long.

He said he can’t remember how he met Smith. The more than half-million dollars that Smith has funded will go primarily toward signs and campaign ads, he said.

The most vocal opponent of term limits appears to be Larry Gibson, the attorney, law professor, historian, political strategist and eminence grise who has lived in Baltimore most of his 80 years.

Gibson said Baltimore suffers from a lack of stability at City Hall, not entrenched politicians. Term limits, he said, would exacerbate the problem. “Baltimore has shown no hesitancy in removing incumbents who they don’t want to continue,” he said.

In an op-ed in the Afro headlined “Defeat the Fox 45 Attack on Baltimore,” Gibson said the city has suffered from a revolving door in its top posts.

“[W]e have had four mayors, five police commissioners, three public works directors, and too many other short-term administrators,” he wrote. “The Comptroller and half of the City Council have been in office for less than two years.”

Gibson declined to say how much money he is spending on lawn signs against Question K, only that he is following the rules on political expenditures. His signs urge voters to “Stop [the] FoxTv Attack on Baltimore.”

Gibson said he has struggled to figure out why Smith, a suburbanite, would dig so deep to get term limits adopted in Baltimore. “I’m shaping my thoughts about this,” he said. To spend “$525,000, so far, for an amendment to the Baltimore City charter, just seems out of bounds. There’s got to be some explanation for this.”

Editor’s note: Bruce DePuyt was a reporter and talk show host at NewsChannel 8 in the Washington, D.C., region from 1993 until 2017. Sinclair purchased NewsChannel 8 and its sister station, WJLA-TV in 2014.