With the Chesapeake Bay as a backdrop, Carolina Peña-Alarcón readies for a teachable moment about climate change at Sandy Point State Park near Annapolis during its annual Hispanic Heritage Month celebration. Alongside partners from the Maryland Park Service, the National Park Service Chesapeake, and the Maryland Department of Natural Resources, she sets out bilingual fact-sheets, a renewable energy card game, and images of windmills and solar panels for kids to color.

Peña-Alarcón is national program manager for EcoMadres, founded four years ago as a grass-roots project within the Moms Clean Air Force, itself an offshoot of the Environmental Defense Fund.  “We’re a community of more than one million parents and caregivers united to educate and raise voices to protect the health of children and communities,” she said.

On this clear blue-sky day with sea gulls flying overhead, she welcomed Erik Machado and his nine-year-old daughter from Honduras on a visit with their state side-relatives, who brought them here. Machado takes materials for his students back home, where he is a social studies teacher.  “I like that they are doing this. It is important to be better informed,” he said. “It’s no secret that in my country environmental conditions are not what we’d like,” acknowledging problems like deforestation, soil erosion, and increased risk of severe weather are all made worse by a warming world.

Peña Alarcón’s mission is to raise awareness about health issues among Latino children and families, who, she says are disproportionally affected by air pollution and exposure to chemical toxins. “Latino children represent one in every six children in the United States and face a higher risk of asthma attacks exacerbated by air pollution than white children,” she said referring to a study by the National Institutes of Health.

“When there are opportunities like this, we’re here,” she said, encouraging positive local steps like pushing for electric school buses, and taking advantage of government rebates for electric vehicles, measures woven into the Inflation Reduction Act, signed into law by President Biden in August. “[It’s] the kick-start we need,” she said in an online post, adding that the new legislation will “improve the health of communities with environmental justice concerns by reducing pollution, increasing access to clean transit, clean energy and green spaces.”

Peña-Alarcon has the credentials to back up what she preaches. She immigrated to the Washington area from Bolivia in her early 20s in 2001. She parlayed an undergraduate degree in finance into a diplomatic visa and work with various United Nations agencies, the International Organization for Migration, the Pan American Health Organization, the U.S. National Renewable Energy Laboratory, and Organization of American States, where she promoted sustainable development beginning in 2004. 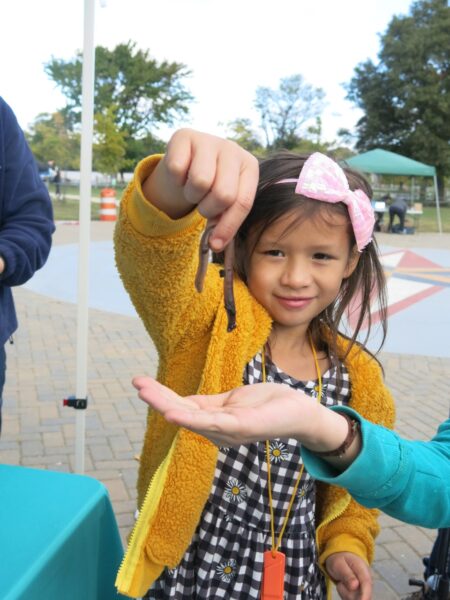 It takes worms to fish, the first lesson this young Honduran-American girl learns before fishing from the beach at Sandy Point State Park’s Hispanic Heritage Day, with gear on loan at the event. Photo by Rosanne Skirble.

“It was there that I found my calling for environmental work,” she said, and added a master’s degree in environment and energy management to her growing resume. She led a push for a transition to renewable energy across the Caribbean from the OAS regional office in St. Lucia. That placement coincided with Hurricane Tomas in 2010, among the most powerful storms ever to hit the island nation.  It damaged crops, washed away homes, felled key infrastructure, leaving in its wake, flash floods landslides, death, and homeless.

As a witness to these events, Peña-Alarcón says she gained new insights that would direct her work in the future.

After more than a decade engaged in work on sustainable development, and issues of health and migration in Latin American and the Caribbean, Peña-Alarcón’s next move was to embrace the environmental movement at the grassroots volunteering locally with Anacostia Riverkeeper, Eco-Action Arlington, and Moms Clean Air Force, which led to her current job with EcoMadres and a refocused career.

Latinos are the nation’s second largest voting bloc, and also its fastest growing.  That’s among the reasons that the Environmental Defense Fund is focused on engaging the Hispanic population. According to a 2021 PEW Center survey, a majority of Hispanic respondents reported that global climate change and other environmental issues impacted their local communities.

Peña-Alarcón says this is where she feels she can make a difference, to meet and talk to whoever walks up to her table on this day, but also to forge partnerships with the environmental activists across many states, including in Maryland, where Latinos make up 12% of the population.

“We educate about the relationship between pollution, climate change and human health, so that the voices of people affected by air pollution are heard so that they can demand equitable solutions for clean air and a livable planet from local and state elected officials,” she said.

Peña-Alarcón will use her voting power for the first time in the midterm elections. She became a U.S. citizen on Sept. 24.

Biden joins fellow Democrats in a push to insist voters that democracy is on the ballot on Election Day.