University of Maryland Global Campus, one of the largest online higher education institutions in the country, is getting criticized for sudden layoffs and how it treats its workforce.

The school recently eliminated 43 positions, according to a letter from school president Gregory Fowler.

Six of those workers are affiliated with state’s largest public employee union — the American Federation of State, County and Municipal Employees (AFSCME).

Some positions cut were executive assistants and advisers who provide writing and other technical assistance for students, the union said. It remains unclear how that will affect student instruction.

Krista Bulley, an administrative assistant II at the school speaking on behalf of AFSCME, said workers are frustrated because the president informed the school community about the layoffs one day before state fiscal officials upgraded revenue estimates and Gov. Larry Hogan (R) announced a 4.5% raise for all state employees on Nov. 1.

“The six people in the union laid off is just unacceptable. We need a reinstatement of those laid off,” Bulley said in an interview. “It just isn’t right.”

The cuts are permanent, said Bob Ludwig, a spokesperson for the school.

Ludwig said all workers laid off will receive separation pay and benefits, as well as job placement support.

“As UMGC employees, we have all embraced a mission of transforming lives — and that mission requires that we change the way higher education works and the way we work within it,” Fowler wrote in the correspondence to all UMGC employees, dated Sept. 28. “This is no small task, and I appreciate the efforts and progress we are making together. Thank you for continuing to focus on the needs of our students and the ways in which we can serve them most effectively.”

The cuts came after an expensive, largely failed ad campaign to boost enrollment that is still underway.

Fowler came to the job in January 2021, amid both the COVID-19 pandemic and the ad campaign.

A budget summary, for UMGC — a school that primarily serves adults who have full-time jobs and families or are serving in the military — shows fall 2021 undergraduate enrollment decreased to fewer than 50,000. School leaders point to the pandemic as cause for much of the decline.

Other contributing factors are that some students began returning to in-person instruction and that there was a technical problem with the Army’s registration portal that lasted nearly a year. The portal problem has been rectified.

The current operating budget, at $486.5 million, was $27 million less (about 5% lower) than that for the previous year.

In-state undergraduate tuition rates for the fall semester are $306 per credit, an increase of $6 from last year. The price for graduate programs increased to $514, up by $10 from last year.

The per-credit price for out-of-state students remained the same at $499 for undergraduates and $659 for graduate students, respectively.

To entice students back online, the school received authorization in 2018 from the University System of Maryland Board of Regents for a six-year, $500 million marketing campaign. 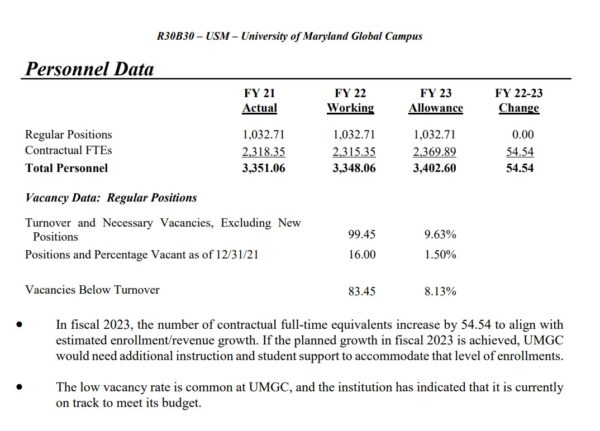 Outside the Washington, D.C., region the marketing budget was $289 million. The school spent $18 million in the marketing campaign’s first year to attract students from Philadelphia but that yielded only 212 students.

“After these lackluster results, the university reduced national spending and reviewed alternatives to meet enrollment growth goals,” according to the budget summary.

Inside the D.C. region the marketing budget was $211 million.

The remaining amount authorized to spend nationally is $227.4 million, and regionally is $30.6 million to attract students from the D.C. area.

But the the budget document states that, “At the end of the term for the marketing contract (August 1, 2024), any remaining authorization will not be expended unless the contract is extended.”

“It definitely shows where [school administrators] priorities are. Our concern as a union is that they are not prioritizing people,” said Todd Holden, president of AFSCME Local 1072. “If they really want to fill the mission of [the University System of Maryland]…and they want to improve the world, what they should be doing is making long-term investments in people and the best way to do that is with stable state jobs that offer full-time employment and are union represented.”

Sen. Jim Rosapepe (D-Prince George’s), who represents College Park and previously served on the University System of Maryland Board of Regents, said he heard about the downsizing but hasn’t yet spoken to anyone from AFSCME.

“Obviously anyone who is a facing layoff is concerned about it and that’s understandable,” he said. “In terms of eliminating vacancies, that’s the better way to go other than layoffs. I do know that many colleges like UMGC have had some changes in their marketing position as a result of the current economy and as a result of the COVID crisis. I don’t know the details, but I’m not surprised [school officials] are trying to save costs.”

Qualifications for top government officials were at the center of debate on the Senate floor Thursday evening — and in an unusual move, a…

Maryland’s Senate on Thursday took a major step toward making “personal use” amounts of marijuana legal beginning in 2023. Lawmakers gave approval to two…