The Legislative Black Caucus of Maryland will have new leadership when the 2023 General Assembly session begins in January.

Two of its longstanding leaders — Del. Darryl Barnes (D-Prince George’s), the chair, and Del. Benjamin Brooks (D-Baltimore County), the treasurer — submitted letters to their caucus colleagues Monday saying they will resign their leadership posts in December. Both have served in the House of Delegates since 2015.

Barnes, who’s chaired the caucus for an unusually long tenure of 5½ years, will step down Dec. 5, which he said will allow the caucus to choose a new leader before the legislation session convenes Jan. 11.

“I feel like the queen of England. With some [caucus members] I am the only chairman that they’ve ever known,” Barnes said in an interview Tuesday. “With the new incoming freshmen class and the new governor, I think it’s time for some new leadership, some new innovative ways to do things and I just think from a strategic standpoint, the time is right for me.”

When Barnes resigns, the LBC 1st vice chair, Del. Jheanelle Wilkins (D-Montgomery), will become interim chair and is eligible to serve through the remainder of Barnes’ term through 2024. But because the caucus will have other leadership positions to fill before session — Brooks’ treasurer post and the caucus secretary position, which is becoming vacant because Del. Rachel Jones (D-Calvert) lost her reelection bid in the July primary — a caucus election is likely, though the timetable for having one wasn’t immediately clear Tuesday.

In his note to colleagues Monday, Brooks, who is heavily favored to win a state Senate seat in November, said he will resign as LBC treasurer after six years on Dec. 31 “so that the new chairwoman can formulate her team unencumbered.”

The LBC elected a new slate of officers this spring, just days before the end of the 2022 General Assembly session, in relatively drama-free fashion.

In an email to caucus members this week, Wilkins paid tribute to both Barnes and Brooks, praising them “for their exemplary service to the Black Caucus and Black Marylanders.” She also thanked them “for providing several months of notice in order to ensure we are able to have a seamless transition and positioned to move forward together.” 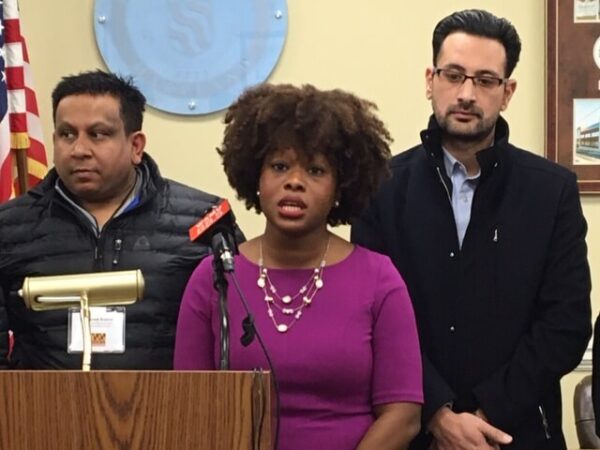 If Wilkins becomes permanent LBC chair, she will represent a generational and ideological shift from her 57-year-old predecessor. Wilkins, 34, is a progressive leader in Annapolis and a rising star in the House chamber, a close ally to Speaker Adrienne Jones (D-Baltimore County) who serves as House parliamentarian.

Barnes has been a steady hand as the head of the LBC, presiding over unprecedented growth and influence for the caucus and keeping his colleagues focused and unified on LBC priorities. He’s considered an expert on minority business and contracting issues.

With 61 members in a General Assembly with 188 lawmakers, Barnes described the Maryland LBC as the largest in the nation. After the Nov. 8 general election, he said the membership could increase to 66.

Barnes took some flak during the Democratic primary when he endorsed state Comptroller Peter Franchot, who is white, for governor, rather than lining up behind the ultimate nominee, Wes Moore, who is Black. Franchot finished third in the primary, behind Moore and Tom Perez, another candidate of color. But Barnes said the primary outcome had no bearing on his decision to step down as caucus leader.

“My colleagues have been fair and sometimes wonderful in my decision-making,” he said. “We have a process in which the members are free to support whoever they wanted to. As a member of the caucus and an individual, I supported the candidate that I wanted to. At the end of the day, we are all going to rally behind Wes Moore in ways that I don’t think no one has ever seen.”

In their letters to colleagues, Barnes and Brooks both laid out what they consider their biggest accomplishments. Barnes letter listed dozens of pieces of legislation, including raising the legal age for buying tobacco products to 21, expanding tax credits for child care, enacting criminal justice reform measures, raising the state’s minimum wage, and making the state’s sports wagering system more inclusive, among other initiatives.

He also noted that the caucus used its influence to elect Jones as the first African-American and first woman to serve as House speaker following the death of the late Speaker Michael Busch (D) in 2019.

Brooks wrote that his proudest accomplishment was settling a 15-year lawsuit that provided more funding for the state’s four historically Black colleges and universities. Lawmakers approved a measure last year that came up with an additional $577 million for the four campuses.

Barnes said he hopes caucus leaders continue to implement a Black agenda when it comes to equity, inclusion and diversity in health, education and criminal justice reform.

With the expected passage by voters of a ballot measure to legalize recreational use of cannabis, Barnes said the state must provide procurement opportunities for small and minority businesses. In addition, the state needs to ensure some of the revenue goes to the state’s HBCUs.

“Those are the things I think we have to have broader conversations around,” he said. “When we start looking at these and other things, I think the caucus will be able to play a bigger role.”

Although Barnes and Brooks will give up their elected positions, they are expected to remain as members of the LBC executive board. Other elected caucus officers are: Del. Melissa Wells (D-Baltimore City) as 2nd vice chair and Del. Carl Jackson (D-Baltimore County) as financial secretary.

Moore names three deputy chiefs of staff and an assistant chief of staff, meaning he’s revealed many of the people who will work on the State House 2nd floor.