A lawyer for the Maryland State Board of Elections urged a judge on Tuesday to temporarily suspend a state law requiring mail-in ballots be held until after the election. He asked that the court allow mail-in ballots submitted this fall to be processed and counted as they arrive, so elections can be certified sooner.

Assistant Attorney General Daniel Kobrin told a Montgomery County Circuit Court judge that Maryland voters are expected to cast a record number of mail-in ballots in the upcoming gubernatorial election. Forcing local elections boards to let them pile up — rather than deal with them as they arrive — would delay the final vote count for several weeks.

Another factor, board members have said, was the long delay in counting primary ballots, a process that stretched many weeks due to the volume of ballots cast, various elections-related controversies and close races that led to recounts.

There is “the very real possibility” that some results would not be known “until Christmas or New Year’s,” without pre-Election Day processing, Kobrin told Judge James Bonifant. The delay would cause particularly acute problems in counties where the local charter requires that top local officials be sworn in on the first Monday in December, he said.

“The question then becomes who is the county executive,” Kobrin said. 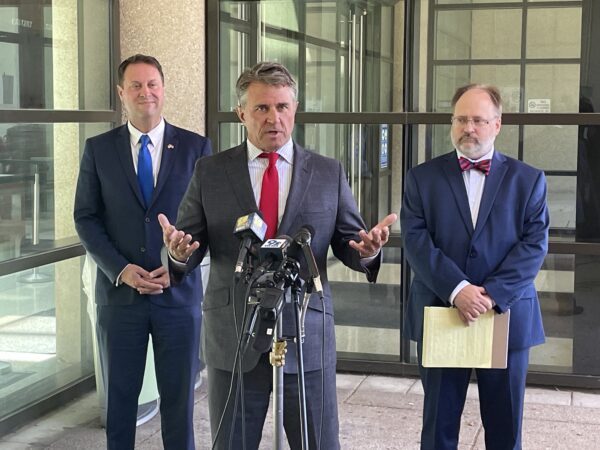 But two lawyers for Republican gubernatorial nominee Dan Cox, a state delegate from Frederick County who sought to intervene in the case, essentially told the court to butt out, arguing that, under Maryland law, questions involving the administration of elections belong to the legislature, not judges.

“This is not your job. Your job is to call balls and strikes,” said Ed Hartman, an attorney for Cox. “What we heard was a passioned plea for policy.”

Questions about the counting of ballots “were already dealt with by the General Assembly,” he added.

The legislature, in fact, passed a bill this year that would have allowed ballot processing and counting of mail-in ballots eight days before early voting started. Cox, who has questioned the results of the 2020 election, voted against the measure.

The state board voted to seek the court’s permission to count mail-in votes early after Gov. Larry Hogan (R) vetoed the bill in May.

It’s the legislature that “gets to decide what is good for the public,” not the courts, Hartman said during Tuesday’s hearing. He later conceded that there are instances in which the courts intervene in elections matters, such as when judges order polling places to extend their hours following an emergency request from a candidate or citizen.

Kobrin insisted that the elections board’s request to be allowed to begin the canvass early is a one-time act. “We can’t come back in 2024 and ask for this again,” he said.

Hartman rejected the state’s claim that the looming flood of mail-in ballots represented the sort of emergency that would justify court intervention. “There are going to be a lot of mail-in ballots, but they know about it,” he said. He suggested that elections officials hire additional staff or recruit “volunteers.”

Kobrin told the court that 508,000 mail-in ballots were requested in the primary. As of Monday, he said, the state has already received 525,000 requests for mail-in ballots in the upcoming general election.

At the conclusion of the two-hour hearing, Bonifant, who was appointed by Hogan and serves as the chief administrative judge for Montgomery and Frederick counties, said he would rule on the matter on Friday afternoon.

Despite his veto, Hogan told the legislature’s presiding officers in the spring that he thinks that early canvassing of ballots — adopted during the pandemic for use in the 2020 election — was a “positive change” because it “would allow hard working election officials to get a much-needed head start on the deluge of ballot envelopes that, under current law, must wait until Election Day for processing.”

Although Cox is trailing badly in the polls and in fundraising to his main rival, Wes Moore (D), he took a day off from his campaign to watch the court proceeding.

Speaking to reporters outside the courthouse, he said the legislature was to blame for the mail-in ballot predicament because it didn’t send Hogan a bill he could sign.

“This is a day about preserving our constitutional and legal integrity in Maryland,” he said. “It’s nothing to be ashamed of; it’s nothing to step back from.”

Cox traveled to Philadelphia to work for the Trump campaign following the 2020 election and he has trafficked in many of the same unfounded elections conspiracies as the former president. Despite repeated questions, he declined to say what harm would come from processing ballots as they come in and did not pledge to accept the results of November’s election, as is customary.

Cox was also represented in court on Tuesday by Matt Wilson, a bow tie-wearing lawyer from Tupelo, Mississippi and a longtime friend of the lawmaker. Wilson told Maryland Matters his fee and travel expenses are being paid by the Cox campaign.