Speaking to reporters on Monday, the Frederick County lawmaker appeared to shrug off suggestions that — 50 days before the election — he is in danger of being routed at the polls.

Cox’s comments followed the release of a Goucher College survey that showed Moore to be the choice of 53% of Maryland voters. Cox attracted support from 31% of the electorate, while other candidates were in the low single digits, including Libertarian David Lashar (4%) and Green Party candidate Nancy Wallace (2%). Nine percent of voters said they were undecided.

Despite the lopsided numbers, Cox called the survey “an opportunity for all of Maryland to dig in and say ‘It’s time to go, we’re rolling.’” He sought to diminish Moore’s win in the Democratic primary, calling it “a very narrow part of the electorate,” despite Democrats’ more than two-to-one registration advantage over Republicans in Maryland.

“This is a very — within striking distance race,” Cox added. “We’re excited.”

Perhaps more troubling for Cox than Moore’s huge lead is the impression voters have formed of the candidates.

Goucher College political science professor Mileah Kromer, who directs the school’s polling operation, said it’s no surprise that voters view the GOP candidate as they do, given his alliance with former President Trump, his decision to bus supporters to the U.S. Capitol on Jan. 6, and Republican Gov. Larry Hogan’s repeated description of him as a “QAnon whack job.”

“The Trump endorsement was a help for Cox in the primary, but it was always going to be a hinderance in the general election,” she said.

She noted that earlier this year, 84% of Democratic likely voters said they refused to even consider voting for a Trump-aligned candidate. For Cox, that makes the challenge of putting together a winning formula in Maryland particularly daunting.

“All the indicators have always pointed to this,” Kromer said of Moore’s huge lead. Nearly 70% of voters told pollsters they have settled on a candidate, suggesting that Cox has little room to maneuver.

Goucher surveyed 1,008 Maryland residents (including 748 who self-identified as likely to cast a ballot). The poll was conducted for the Baltimore Banner and WYPR and was in the field September 8-12, It had a margin of error of 3.1%.

Cox noted that in 2014, Larry Hogan once trailed then Lt. Gov. Anthony Brown by double digits, suggesting that he could close his gap in similar fashion.

In a statement, the Moore campaign said the new poll “makes clear that Dan Cox’s values are not Marylander’s values.”

“That’s why the stakes of this election are so high,” the statement added. “While it’s clear that Wes Moore has the momentum, we can’t take our foot off the gas for even a second. If Dan Cox wins, he’ll try to ban abortion, undermine our fair and free elections, and defund our public schools.” 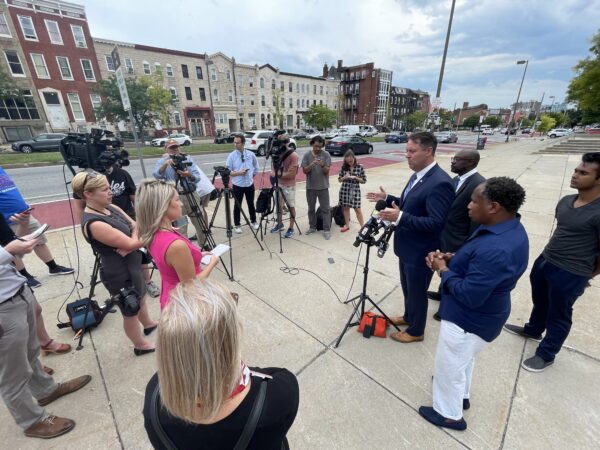 While Cox has made other moves to moderate his image since winning the GOP primary, he didn’t do so Monday during a Q&A with reporters outside a public schools office in Baltimore. He appeared alongside Daren Muhammad, the uncle of the Wes Moore whose troubled story the gubernatorial candidate focused on in his bestselling “The Other Wes Moore.”

Noting that the back cover of early an edition of the book falsely stated that the two Wes Moores “were born blocks apart within a year of each other” (the candidate was born in Takoma Park), Cox again urged that schools remove “The Other Wes Moore” from library shelves. He also said it should be removed as recommended reading — or that he be given “equal time.”

“Exploiting our Maryland families that have gone through tragedy is not a path of success to lift us up and to unify us in Maryland,” Cox said. “It’s inappropriate to be presenting material that is really fictional campaign material as part of a curriculum.”

Muhammad, who introduced himself as “the uncle of the real Wes Moore,” called the candidate’s book “exploitation at the highest level,” and he urged an investigation into the school districts that have made the book required reading.

Brian Adam Jones, a spokesperson for the Moore campaign, labeled the criticism of the Democratic nominee “a desperate attempt by Dan Cox to distract from today’s poll results that show Dan Cox’[s] values are dangerously out of step with Maryland families by doing what Dan Cox does best – peddling baseless conspiracy theories.”

“We’re focused on connecting with voters around our vision of economic opportunity, working with communities and law enforcement to ensure public safety, and fighting to make sure that every child in Maryland has access to a world-class public education,” he added.

During Monday’s press conference, Cox declined to say whether he would accept the results of November’s election. He has filed an amicus brief against a Maryland Board of Elections bid to allow local elections officials to begin processing mail-in ballots prior to Election Day. A hearing in the case will be heard on Tuesday in Rockville. Cox reiterated his opposition to early processing, saying doing so is “inappropriate” and “creates mistrust.”

When a reporter asked about the transporting of Venezuelan refugees from Texas and Florida to Washington, D.C. and Massachusetts, Cox ended his press conference, saying he was running late to his next event.