Two years after the launch of a major push to improve bus and rail service throughout the state, the Maryland Transit Administration has unveiled a list of potential north-south projects in the Baltimore region.

The seven potential alignments released on Thursday were prepared in coordination with Baltimore and Baltimore County. As with the potential east-west projects unveiled over the summer, officials hope the list generates feedback from the public.

The state’s top transit official said local input was helpful in crafting alternatives that have the potential to move people between Towson and Baltimore City equitably.

“MTA is excited to be working with our local partners to improve critical transit connections from Towson to Downtown Baltimore and improve access to jobs, education and recreation,” Administrator Holly Arnold said in a statement.

“This is another significant step in the continued effort to build an equitable rapid transit network, and the public’s input is invaluable to the process.”

As with the east-west study, the seven north-south alignments were fashioned based on public input, an analysis of travel patterns and existing transit ridership and land use. The proposed preliminary alternatives overlap with the most utilized routes in the local bus network, the agency said in a statement.

The alternatives include a mix of heavy rail, light rail and bus rapid transit. Costs and construction times vary accordingly. 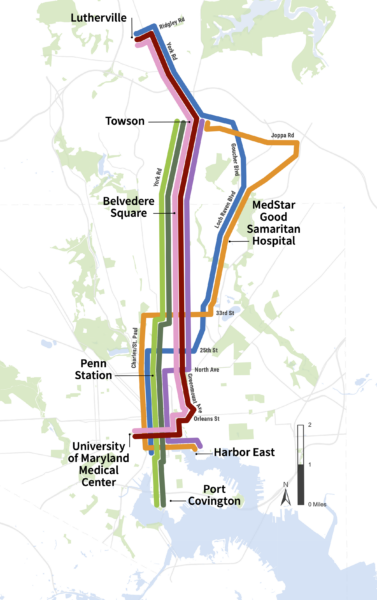 These are the seven preliminary alignments:

The Baltimore area’s transit network is skimpy for a region its size, and transit users have long complained that buses routinely arrive late or not at all. Release of the two sets of potential transit lines comes during a period of increased criticism of the Transit Administration, which has had to cut service because of a personnel shortage.

State Sen. Cory McCray (D-Baltimore), chair of the Senate Budget and Taxation subcommittee on public safety, transportation and environment, expressed hope that the next governor takes the issue head-on.

“Under the Hogan administration, the MTA bus system for the Baltimore region has been an utter failure,” he said. “The challenges of the bus just making it has been super-problematic over the past seven-eight years.”

McCray said his family has a car, so if his daughter’s bus doesn’t arrive, they can get her to school. But many people — those who need to get to work on time and seniors who need to pick up prescriptions or groceries, for example — aren’t as fortunate, he said.

“That inability to deliver that basic service that we’re all supposed to have is a big issue,” he said.

“That’s a proven strategy to grow transit ridership,” he said. “You feed the demand. Your run more frequent service — and in some cases more higher-capacity cars — where it’s already busy.”

The public can learn more about the routes under consideration and provide feedback by going to the project website.