Update: After additional ballot-counting and auditing on Saturday, the Montgomery Board of Elections issued a brief statement that the results for early voting have been counted and audited, resulting in a one-vote gain by David Blair. No additional information was released. The recount continues Sunday at 9:30 a.m.

Dozens of election workers will report again this morning to a Germantown gymnasium, as the recount in the Democratic primary for Montgomery County executive continues.

Nearly 100 elections workers convened for the initial day of the recount at the Germantown Community Center on Friday.

The review of more than 140,000 paper ballots in the race between incumbent Marc Elrich and businessman David Blair is expected to run through at least Sunday.

After the July 19 primary results were certified, Elrich led the race by 35 votes.

Two-member teams of ballot reviewers who reported to Germantown for the recount were made up of employees from the State Board of Elections and county boards of elections throughout Maryland.

“We very much appreciate you being here. You guys were election heroes before you walked in the room today because I know that you’ve worked in elections all over the state already,” Montgomery County elections board Secretary David Naimon said. “But we appreciate the fact that you have come here to help us with this very important part of democracy in the recount.”

Teams reviewed packs of 10 ballots at a time, going through one precinct-based box at a time.

The process goes somewhat more quickly than a regular canvass — during the recount, election workers are looking exclusively at the markings in the county executive race.

Before counting started, the board’s attorney, Kevin Karpinski, read off a lengthy list of acceptable ballot markings in Maryland, including: the majority of the oval for a candidate being filled in; the candidate’s name being circled or underlined; an X, checkmark, asterisk, plus-sign or star any portion of which was “contained in a single oval and no portion of which enters into another oval,” and many other less-typical, though still valid, markings. 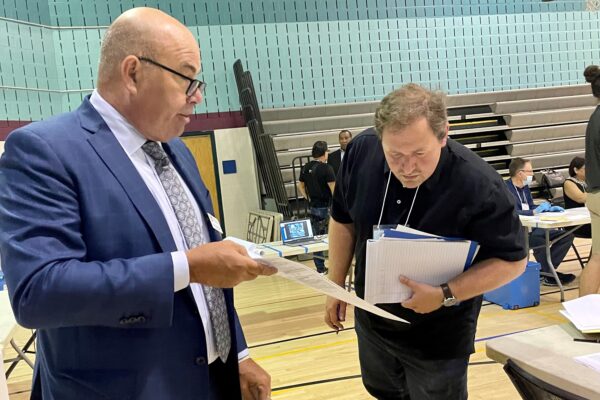 Aaron Kraut, communications director for the David Blair campaign, reviews a ballot held by Montgomery County Board of Elections attorney Kevin Karpinski on the first day of a recount in the Democratic primary for county executive. Photo by Danielle E. Gaines.

In the end, Karpinski said: “Let’s make life simple: if you have any doubt whatsoever as to whether there’s a vote for Mr. Blair or Mr. Elrich or another candidate on the ballot, just raise your hand and that will be a board referral.”

In the end, Board of Elections members huddled around more than two dozen ballots on Friday. In most cases, a voter had marked more than one candidate in the race and the ballot was deemed an ineligible “overvote.” In other cases, voters bubbled in a choice for more than one candidate, but additional markings like scratch-outs made their intent clear.

On a few ballots, the campaigns filed paperwork that will enable them to seek judicial review of the board’s decision at a later date if they so choose.

The election volunteers had finished counting early voting ballots by about 11:30 a.m. on Friday and were working election district-by-election district on Election Day ballots when counting concluded for the day in the evening.

About 20,000 ballots were counted. The Montgomery County Board of Elections did not post any results from the first day of the recount anywhere online. Gilberto Zelaya, spokesman for the county board, said Saturday morning that the results weren’t posted pending a final review of the re-tallied votes at early voting centers. Naimon said in opening remarks on Saturday that he hopes results will be posted online Saturday evening, and if not, an explanation as to why.

The recount continues Saturday morning at 9:30 a.m. and will be livestreamed.

Editor’s Note: This story was updated to include remarks from the start of Saturday’s ballot count and to remove reference to an earlier preliminary ballot-count change.