Editor’s note: This story has been updated to include a comment from Wes Moore’s campaign.

Del. Dan Cox (R-Frederick), the GOP nominee for governor, said Monday that he has no beef with FBI agents carrying out their duties, but does have a problem with “the politicians who are giving the orders” that lead to controversial searches of private property.

Cox was asked about comments he had made last week after FBI agents executed a search warrant of former President Trump’s Mar-a-Lago home in Florida. Like many Republicans and Trump supporters, Cox last week sharply criticized the FBI search for missing national security documents, and suggested that, if elected governor, he would use state police and the Maryland National Guard to stop federal authorities from carrying out  similar actions in the future.

But Cox attempted to modulate his tone during a conversation with reporters at the opening of his new campaign headquarters Monday in Annapolis, saying he supported all law enforcement officers.

During prepared remarks to a crowd of supporters, Cox said he and his running mate, attorney Gordana Schiffanelli “back the blue,” and vowed to fight crime in Maryland on a variety of fronts. Cox also sought to draw distinctions between himself and Wes Moore, the Democratic nominee for governor, and repeatedly said Moore would follow “the Biden approach” to tackle Maryland’s problems.

Cox’s remarks on crime-fighting and his solidarity with law enforcement officers inevitably brought questions about his remarks last week on the Mar-a-Lago search, which he compared at the time to “communist stasi police state tactics.”

The search of Mar-a-Lago, which was ordered by the U.S. Justice Department and approved by a federal magistrate, has brought outrage on the right, and increasing calls to target federal law enforcement authorities. Last week, a Trump supporter was shot and killed after trying to attack an FBI field office in Cincinnati, Ohio.

But Cox said he opposed attacks on law enforcement officers.

When asked by a reporter, Cox said he agreed with Schifanelli that Moore is peddling a socialist and communist platform, citing the Moore campaign’s requirement that people attending a recent fundraiser be vaccinated against COVID-19.

“Wes doesn’t need an empty lecture on his commitment to the ideals of faith, justice, and opportunity that are the bedrock of this country,” Jones said. “He has campaigned on a clear message of economic empowerment and increasing work, wages, and wealth for every Maryland family.” 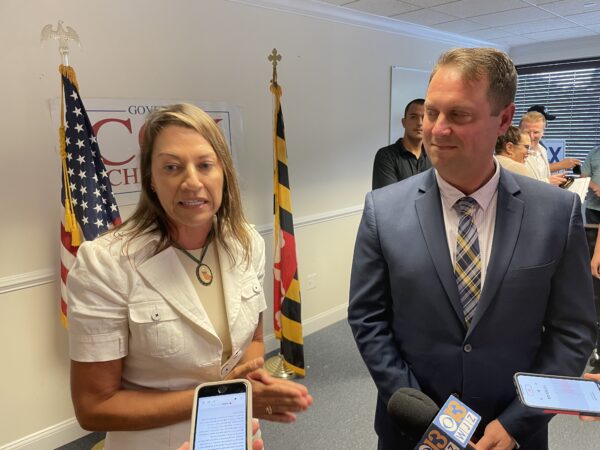 Cox and Schifanelli frequently said that their campaign is about restoring freedom in Maryland after more than two years of public health mandates brought on by the pandemic.

“I could not be prouder than to stand with all the patriots in this room who want to see Maryland free,” Schifanelli said.

Even though Cox is closely associated with Trump and the MAGA movement, he took steps to sound more conventional Republican themes that are being repeated on the campaign trail throughout the country — that voters want a stronger economy, safer streets and more control over their children’s education.

“We’re here for children, for our careers and for public safety,” he said.

Cox defeated former Maryland Commerce Secretary Kelly Schulz, the establishment favorite, by 9 points in the Republican primary. Monday’s headquarters opening was the first time he met with a group of reporters since claiming the GOP nomination on July 19.

“We won on a huge landslide to win the Republican nomination, in a historic turnout,” he said. “It’s a great honor.”

Cox’s primary victory came despite the fact that he had only a ragtag operation powered by volunteers (and propelled by Trump’s endorsement). Now he has a campaign manager with national experience, Zach Werrell, and his first campaign headquarters. Werrell cast the headquarters opening as a sign of great progress.

Cox “did pretty well without having a proper campaign structure,” he said, pledging that reporters would now get regular updates on Cox’s schedule and activities.

The Maryland Democratic Party issued a “prebuttal” to Cox’s news conference earlier Monday, seeking to remind voters of the candidate’s fealty to Trump and his earlier remarks on hypothetically using state law enforcement authorities to thwart the FBI.

“The more that Marylanders learn about his fringe history and appalling agenda, the more soundly they will reject it,” Maryland Democratic Party spokesperson Ernest Bailey said.

“The only thing more baseless and conspiratorial than suggesting Wes Moore is a socialist is thinking Donald Trump won the 2020 election,” he said.

‘It’s again a scary time to be a DACA holder,’ a Maryland Dreamer says.