Frederick County Council President M.C. Keegan-Ayer says that if her one-vote loss in last month’s Democratic primary holds, she will find new activities to dive into.

In the meantime, the District 3 Democrat is pursuing a double-barreled strategy for overturning her apparent defeat at the hands of challenger Jazmin Di Cola.

Di Cola, a community activist, eked out the narrowest win possible — 2,298 votes to 2,297 — in her bid to deny Keegan-Ayer their party’s nomination.

On Thursday the incumbent filed for a recount. And on Friday she and her attorneys will be in court, seeking to have Di Cola declared ineligible to represent District 3 due to a residency issue.

The crux of Keegan-Ayer’s suit is that although Di Cola lived in the district when she entered the race in 2021, she moved out of the district in the spring.

According to the county charter: “A Council member elected or appointed to serve as a representative of a Council District shall be a resident of the district for at least one year prior to election or appointment.”

“My understanding is that she did not reside in the district, according to the rules of the charter, at the time of the election, on the 19th of July, and she had not resided in the district for at least a couple of months,” said Keegan-Ayer. “All of this will come out [in court] and we’ll see what happens at that point.”

Di Cola did not respond to a text message or to multiple emails on Thursday. In a text message to a Frederick News-Post reporter earlier in the week, she referred questions to her attorney, Bernard Semler.

On Aug. 2, Di Cola told a reporter that she had “moved back to beautiful Hillcrest,” in District 3.

A hearing has been scheduled for 9 a.m. Friday. Keegan-Ayer, who was seeking her third term, is represented by former state delegate Timothy Maloney, a legal powerhouse who is well known in political circles.

Keegan-Ayer said that if her one-vote loss were to stand, she will not torture herself about the things she could have done differently. “If this is the will of the voters and that is what stands, then I will ride off into the sunset and find myself something else to throw my passions into.” 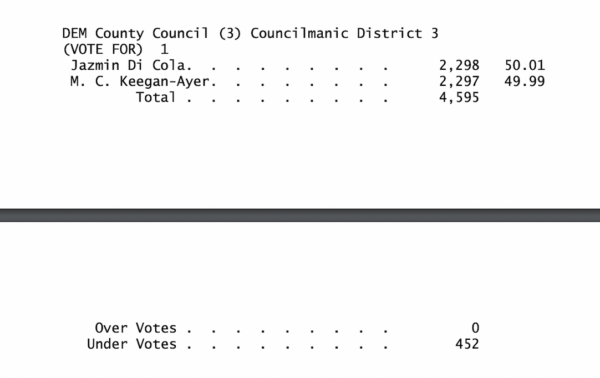 The vote tabulation in a Frederick County Council primary shows that a single vote separated the two candidates. Screenshot.

The results of Frederick’s primary races were certified by the Frederick County Board of Elections on Wednesday. The board’s monthly meeting for August is set for next Wednesday at 1:45 p.m.

Maryland saw other close races this cycle, and there have been other races decided by a single voter.

Montgomery County Executive Marc Elrich (D) is clinging to a 42-vote lead over challenger David Blair (D), with a recount set to begin in the coming days. And a recount has been requested in a close House of Delegates race in Prince George’s County. A recount in Harford County ended earlier this month with just three votes dividing the top candidates.

Former state Sen. Jim Brochin (D-Baltimore County) knows what it’s like to wrestle with a heartbreakingly narrow loss. In 2018, his bid for county executive fell 17 votes short. Former state Delegate Johnny Olszewski won the Democratic primary and went on to win in November.

Brochin said even now — more than three years later — he replays the election in his mind.

“There are still times when I’m like, ‘God, if only I had sent out those two mail pieces in Dundalk’” rather than putting $7,000 into TV ads, he said. “You’re always going to Monday morning quarterback.”

Brochin said his accomplishments in the Senate and the knowledge that he campaigned as hard as he could helped him to move on. “I knocked on a ton of doors three years out,” he said. “I never think to myself: ‘God, if I had knocked on one more door.’ … In general I think I did everything I could.”

On the other hand, he said, “if you were lazy and you lost by one vote or 10 votes, and you took a two-week vacation in the middle of the campaign, then you’re going to have a really tough time the rest of your life getting over this.”

Editor’s Note: This story was updated to correct a quote from M.C. Keegan-Ayer.