State and Howard County officials said the completion of a Maryland Route 32 improvement project will result in faster, safer trips for travelers.

The state spent $151 million and the county chipped in $17 million to upgrade a nine-mile stretch of the highway, from Interstate 70 in West Friendship to Maryland Route 108 in Clarksville. 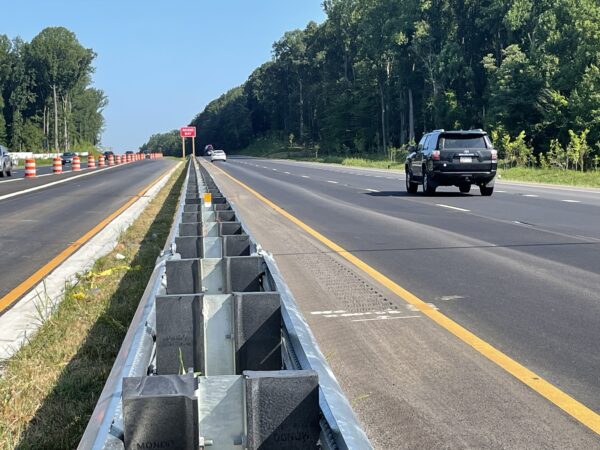 Guardrails line the median of MD 32 in Howard County. Photo by Bruce DePuyt.

Where motorists once found a two-lane road where head-on crashes were common, they now will use a four-lane divided highway with a guardrail in the median.

“This corridor is an important gateway to jobs and economic growth, which connects vibrant communities with business centers,” said Hogan. “For far too long, this corridor was one of the most congested and most dangerous sections of highway in the state of Maryland.”

As part of the project, the Triadelphia Road Bridge also was replaced.

Hogan said the state has renovated or replaced 65 of the 69 bridges that were rated structurally deficient when he took office. The remaining four are under construction, he said.

The state Route 32 upgrade has long ranked among the county’s top transportation priorities.

“For many years, we’ve heard from our community about safety concerns and congestion issues along this stretch of highway,” said Ball. “We’re here today to celebrate the completion of this critical project.” 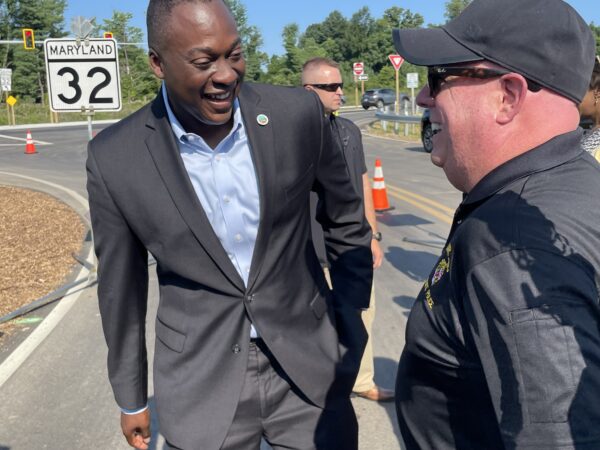 In addition to new lane capacity and safety upgrades, the project includes bioswales to filter and manage highway runoff, in an effort to keep chemicals from reaching the Chesapeake Bay watershed. The state also planted 14,000 trees in the Route 32 corridor, the governor said.

Former County Executive Allan Kittleman (R), who lost to Ball four years ago and is seeking to reclaim the post this year, attended the ribbon cutting. He called the Route 32 upgrade “huge for Howard County.”

“When I was county executive, we approached then-secretary Pete Rahn with the idea of Howard County contributing some money to the first phase,” Kittleman said. “It really was the catalyst to get it going.”

He said many people who use the road are coming from somewhere else. The upgrade will reduce the number of cars who cut through neighborhoods to avoid congestion.