They are running against Republicans who have been described as unelectable extremists. But Maryland Democrats came together on Monday to declare that they will campaign hard between now and November — and that they will not take any race for granted.

“We know sane versus crazy is on the ballot,” said Baltimore Mayor Brandon Scott (D). “The only way (to win) is that we get out and vote in numbers. We can’t assume anything.”

“Don’t take any election for granted,” said Sen. Ben Cardin (D). “We need Team Maryland to fight for the values that are important to our state.”

At a two-and-a-half-hour unity rally in downtown Silver Spring, top Democratic officials from around the state pledged to get behind gubernatorial nominee Wes Moore and his running mate Aruna Miller, attorney general candidate Anthony Brown and comptroller candidate Brooke Lierman.

They also pledged to work to elect Democrats to the U.S. House and to return Democratic majorities to the state legislature, where the party has long held sway. 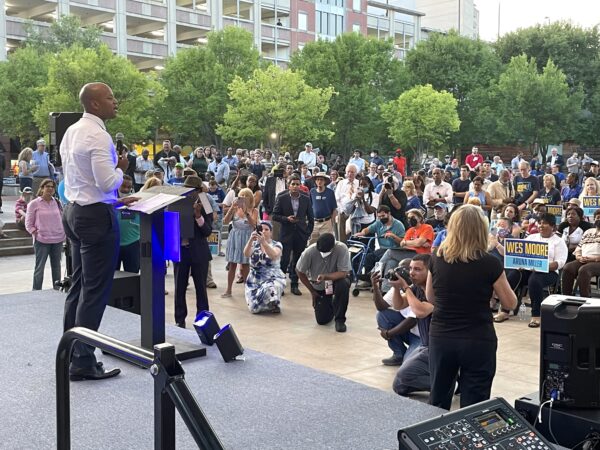 Much of the rhetorical focus was aimed at Del. Dan Cox, the Republican nominee for governor. A Trump-endorsed conservative, Cox has raised baseless claims about the 2020 elections and he holds views on social issues that are largely out of step with the state’s electorate.

At least four of Moore’s former primary rivals attended the rally, and the two who finished directly behind him — Perez and Franchot — offered him their full support in November.

“Trumpism is on the ballot right here in Maryland. We know that,” said Perez, noting that Cox has pledged to bring Trump-inspired policies to Annapolis if elected. “That’s why we need Wes and Aruna in a big way.”

“We need to put aside our differences,” said Franchot. “We need to unite behind this historic, transformative team.” 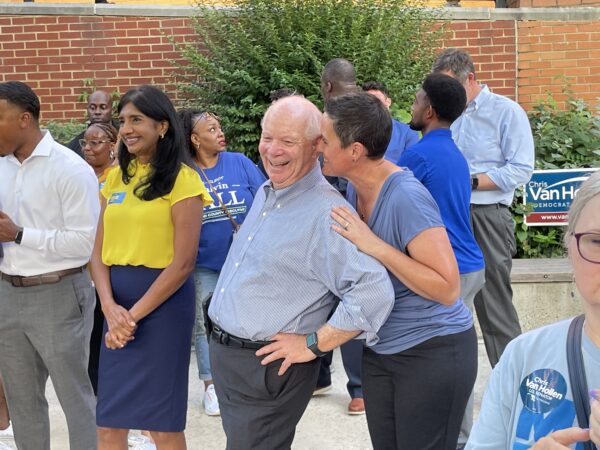 Moore pledged to “fully fund and properly implement” the educational reform initiative known as the Blueprint for Maryland’s Future. He said he would fight to expand “free Pre-K,” to peg the state’s minimum wage to inflation, to spur alternative sources of energy and to make Maryland more attractive to job-creators.

Earlier in the program, the crowd booed when speakers referenced Rep. Andy Harris, a hard-right conservative who voted not to certify the results of the 2020 election hours after protestors ransacked the U.S. Capitol. He attended a White House meeting in which Trump and senior officials discussed a plan to encourage members of the public to fight the election outcome on January 6.

“We know that Andy Harris was one of ten in the room,” said former Del. Heather Mizeur, who is challenging Harris. “I’m running to defeat a traitor to our nation!”

Comptroller candidate Del. Brooke Lierman spoke, as did Howard County Executive Calvin Ball, Baltimore County Executive Johnny Olszewski and Anne Arundel County Steuart Pittman. Montgomery County Executive Marc Elrich attended the event but was not permitted to speak. In an interview, party chair Yvette Lewis said the decision not to allow the host county executive to speak was made “out of an abundance of caution,” because Elrich and rival David Blair are separated by a small number of votes, with the canvass expected to last several more days. Blair also attended the rally.

Although much of the rhetorical venom was aimed at Cox, Democrats are also pledging to rally behind Rep. Anthony Brown, the party’s nominee for attorney general.

Cox did not return a voice message or a text message on Monday. Reached on his cell phone, Peroutka said he is on vacation with family. Harford County Executive Barry Glassman, the GOP candidate for comptroller, is also traveling and declined to comment through an aide. Rep. Andy Harris did not respond to an emailed request for an interview.

In a statement prior to the Democrats’ rally, Maryland Republican Party Chair Dirk Haire appealed for unity in his own party in the wake of the July primaries.

“Now that we have nominees, we look forward to a spirited and unified front as our candidates fight for freedom and limited, efficient government in Maryland,” he said.