Fresh off a tough defeat in the Republican primary last week, state Sen. Adelaide Eckardt (R-Middle Shore) filed papers on Monday to run in the upcoming special election for mayor in Cambridge, her hometown.

“It’s an exciting opportunity,” Eckardt said in an interview. “I’ll be able to get to use a lot of skills and relationships I’ve built up over the years.”

Eckardt, a 28-year veteran of the General Assembly who has spent the past eight years in the state Senate, was defeated in the Republican primary by state Del. Johnny Mautz. According to unofficial results tallied as of Monday afternoon, Mautz, who promised to bring a more conservative approach to the Senate, won 75% of the vote compared to Eckardt’s 25%. 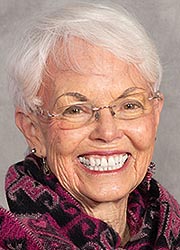 But Eckardt said the Aug. 23 special election for mayor presents her with a good opportunity to pivot and not dwell on the “miserable response” she received in the primary.

Since Bradshaw stepped down, Cambridge City Manager Tom Carroll has served in the mayor’s role, and city Commissioner Lajan Cephas has been presiding over most City Council meetings.

The filing deadline for candidates interested in running in the special election for mayor is 5 p.m. Wednesday. According to Carroll, the candidates who have filed so far, in addition to Eckardt, are:

“Based on the current composition of candidates, I’d say this is Addie’s race to lose,” said Len Foxwell, a political strategist who grew up in Cambridge and lives there now. Despite being a Democrat, Foxwell said he has pledged to go door-knocking for Eckardt, who he has known for 40 years.

If no candidate gets a majority of the vote in the Aug. 23 election, the top two vote-getters will advance to a runoff on Sept. 20. The winner will serve the remainder of Bradshaw’s four-year term, which runs to the fall of 2024.

Eckardt said that since her primary defeat, she has been conferring with city business, civic and political leaders about the mayoral election to gauge how her candidacy would be received.

“I didn’t want to go through that again,” she said of her loss, “so I wanted to make sure I had a pretty good chance.”

Eckardt said that her years as an appropriator in Annapolis — eight years in the Senate plus a dozen more in the House — made her uniquely equipped to help the city of 13,250.

“We need leadership at City Hall and resources,” she said.