With 1,988 of 2,074 statewide election day precincts reporting as of 2 a.m. Wednesday, Brown had 59.6% of the Democratic primary vote while retired Judge Katie Curran O’Malley had 40.4%. Even though tens or even hundreds of thousands of mail-in ballots have yet to be counted, that was enough for Brown to claim victory.

“This has been an amazing campaign and I am energized by all of my supporters and my family,” she said. “I am feeling good and cautiously optimistic that we are going to win this primary, but more than half of the votes still need to be counted and we might not have final results for a while. Now more than ever, we owe it to every person who participated in the electoral process to make sure that their vote is counted and that their voice is heard.”

The winner of the primary will likely square off in November against former Anne Arundel County Councilmember Michael Peroutka (R), who led former prosecutor Jim Shalleck by 16 points in the GOP primary as of 2 a.m. Wednesday.

Before he was elected to Congress, Brown won his party’s nomination for governor in 2014 but was defeated by now-Gov. Lawrence J. Hogan Jr. (R). 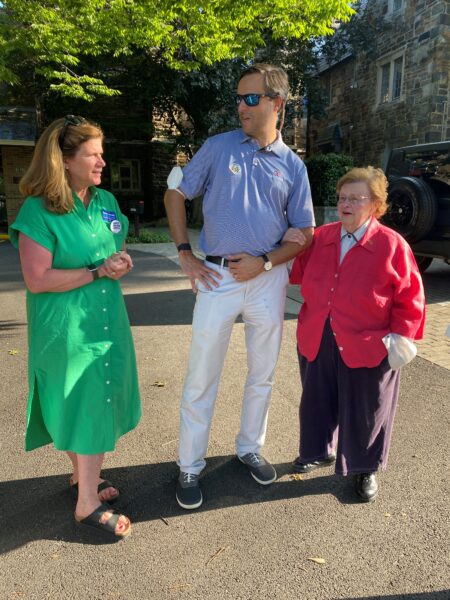 After a day of campaigning, Katie Curran O’Malley, Democratic candidate for Maryland attorney general, chats with former U.S. Sen. Barbara A. Mikulski and Matthew D. Gallagher, president and CEO of the Goldseker Foundation, outside a polling place at First English Lutheran Church in North Baltimore. Photo by William F. Zorzi.

Going into that election, Brown had served as lieutenant governor for two terms under then-Gov. Martin O’Malley (D) and had served two terms in the House of Delegates.

Katie Curran O’Malley, who is married to Martin O’Malley, is a former assistant state’s attorney in Baltimore County and served 20 years as a Baltimore City District Court judge. Her father, J. Joseph Curran Jr. (D), was a legislator, lieutenant governor, and spent a record five terms as Maryland’s attorney general.

Towards the latter half of the primary, the two candidates sparred in ads. O’Malley released an ad in late June that questioned Brown’s qualifications to be attorney general. Brown responded, and the two have gone back and forth since.

On the Republican side, Shalleck, a Montgomery County defense attorney and former chairman of the Montgomery County Board of Elections, raised more than Peroutka, a controversial far-right former member of the Anne Arundel County Council.

Peroutka received an endorsement from Del. Dan Cox (R-Frederick) who is running for governor. Shalleck got backing from Hogan.

Nene Narh-Mensah is a journalism and public policy major at the University of Maryland, College Park. He serves as the co-editor-in-chief of the Black Explosion and writes for the Diamondback. He has over five years of reporting experience and has an interest in policy and culture journalism.

All posts by Nene Narh-Mensah