Undeterred by shouts and catcalls from supporters of rival Dan Cox — and Cox himself — Republican gubernatorial candidate Kelly Schulz and Gov. Lawrence J. Hogan Jr., denounced a Democratic effort to boost her main rival in the July 19 primary.

Hogan, who is term-limited, and his former commerce secretary stood in blistering heat outside the State House, where — surrounded by sign-waving backers — they slammed the Democratic Governors Association’s plan to spend more than $1 million in the weeks leading up to Election Day.

According to companies that monitor media spending, the association intends to run an ad called “Meet Dan,” a certain reference to the conservative firebrand. The Frederick County state delegate is one of four Republicans running for governor and, according to one new independent poll, he is the frontrunner.

In races around the country, Democratic groups have run ads that appear to be critical of far-right candidates but which have the real goal of boosting office-seekers who might struggle in a general election.

Hogan and Schulz offered a full-throated rejection not just of the DGA but of Cox as well. Cox and his family, including a newborn, having gotten wind of the event, stood just feet away, occasionally shouting back at the governor and his protege. Cox supporters waved signs and accused the pair of lying and Schulz of ducking debates.

It was, in short, as raucous and tense an event as tends to occur in Maryland politics.

The governor said that “Democrats are so scared about losing again, that they are now enabling, emboldening and embracing a QAnon conspiracy theorist, someone who bused people to the Capitol on Jan. 6 and called Vice President Pence ‘a traitor’ as the Capitol was under attack.”

Cox, who has the endorsement of former President Trump, has advanced baseless theories about the 2020 elections, including the vote-count in Maryland.

“The people who scream all day long about democracy being at stake are willing to play Russian roulette with the Maryland State House just to win an election,” Hogan said. “It’s the worst kind of hypocrisy.”

Schulz called Cox a “lying conspiracy theorist who is a danger to our party and to our state,” and she accused Democrats of making a strategic investment in the GOP primary to save money in November.

“The math is easy,” she said. “Spend a million now and save $5 million by not having to face me in the general election. … I am a threat standing in the way of one-party rule in Annapolis.”

Remarkably, the rally also featured the chairman of the Maryland Republican Party, Dirk Haire. Although he acknowledged that his post requires him to be neutral in party primaries, he called on GOP voters to be vigilant. “Don’t get fooled by the national Democrats and their rich liberal cronies,” he said.

Schulz drew applause from GOP lawmakers and other supporters when she pledged to “fight back” against the Democrats’ plan to sway the GOP electorate.

According to Kantar, a New York-based research firm, the DGA intends to spend $1.037 million over a two-week period starting on July 5. Mail-in ballots have already gone out and early voting begins on July 7.

A DGA spokesman declined to provide the “Meet Dan” ad. A spokesman for the Maryland Democratic Party declined to make Chair Yvette Lewis available for an interview.

Speaking to reporters after the Schulz rally, Cox said the statements from her camp “are proof that we’re winning.” He cast Hogan’s denunciation of him as a distraction from the increase in the state gas tax that is set to take place at midnight Thursday.

“This is all a distraction from the establishment that is going to crush the people at midnight,” he said. “And they’re doing nothing about it.”

In a series of cell-phone videos posted to social media, Cox accused Schulz of running a “failing” and “lousy” campaign. “This whole smear campaign is laughable. It’s hilarious,” he said. “They’re desperate. It’s going to be exposed and they’re going to fall into their own pit on this one…”

There was a heavy security presence during the Schulz rally. When a sign-holding Cox supporter tried to crowd in next to Schulz supporters before the rally, Schulz strategist Doug Mayer ordered him to leave. The two men then exchanged insults.

The 30-second spot hit the internet late Thursday. It is, effectively, two ads in one.

The first section appears designed to appeal to the GOP base. The second part labels Cox “too conservative.”

“Cox worked with Trump, trying to prove the last election was a fraud. 100% pro-life, he’s fighting to end abortion in Maryland,” the narration continues. “And Cox will protect the Second Amendment at all costs, refusing to support any federal restrictions on guns, even pushing to put armed guards in every school.”

“Dan Cox. Too close to Trump,” the ad concludes. “Too conservative for Maryland.”

D.C.-based Democratic groups like the DGA have spent money in GOP primary races across the country in an effort to boost fringe candidates thought to be less attractive in a general election contest. In many cases, the gambit has paid off, but the practice is not without its critics.

They argue that the country is harmed when races don’t play out as expected.

Democratic strategist Howard Wolfson told The Washington Post it is “very dangerous and potentially very risky to elevate people who are hostile to democracy.”

“Either this is a crisis moment or it isn’t,” said Wolfson, who has worked for former New York Mayor Michael Bloomberg and others. “And if it is — which it is — you don’t play cute in a crisis.” 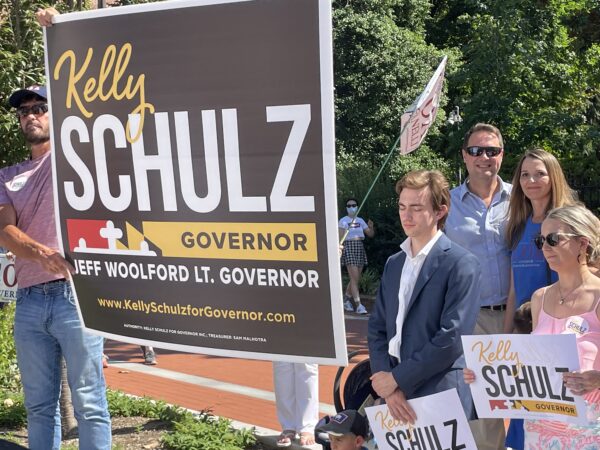 Gubernatorial candidate Dan Cox and his family listen as rival Kelly Schulz and Gov. Larry Hogan denounce him at a Schulz campaign rally in Annapolis on Thursday. Photo by Bruce DePuyt.

In a statement, DGA spokesman Sam Newton defended the association’s spending in Maryland.

He faulted “Republican politicians and organizations” who repeat false claims about the 2020 election, “pander to conspiracies or are simply too cowardly to issue a full-throated condemnation.”

“Educating the public on the MAGA extremism, and cowardice, of today’s Republican party is essential to ensuring all citizens have the facts,” he added. “It’s time for the GOP to look in the mirror and have a reckoning with itself, instead of trying to find someone else to blame.”

The new ad buy is not the DGA’s first foray into the Schulz-Cox race. The organization has sponsored two surveys of Maryland Republicans, both of which showed Cox in the lead.

Although subsequent independent polling produced similar results, Schulz loyalists were quick to denounce the DGA-funded surveys, calling them an attempt to sway the electorate.