While captivating a little boy with stickers and lollipops, she got his mother to sign him up for a free check-up at Casa Ruben, her non-profit medical office off the Capital Beltway near White Oak.

“We prepare children to go to school, and specialize in adolescents and those disengaged from care,” Peralta said.

Peralta and her brother Ruben, also a doctor, founded Casa Ruben in 2003. Their mission is to serve an underserved community, with many ineligible for health care assistance because they are undocumented immigrants.

With a staff of 10 — including a receptionist, medical assistants, case managers, and a lawyer — the small clinic, on the 2nd floor of a two-story building holds office hours five days a week.

“At times it’s like an urgent care emergency room,” she said, noting that earlier that day she had already stabilized a patient with acute asthma, a youth with a broken leg, and given exams required for school programs.

During the COVID-19 pandemic, Peralta has been a part of state and local efforts to connect Marylanders with vaccinations and routine primary health care.

But nothing has been routine about Peralta’s life or her work in the medical field.

Growing up in the Dominican Republic in the 1960s, Peralta and Ruben followed their father, a surgeon and regional hospital director, into remote mountainous areas carrying medical supplies and vaccines for the poor.

“This was an early lesson in the importance of primary care,” she said.

Among her honors is the Latinos of Distinction Award conferred by the Food and Drug Administration and the White House in 2000, plus induction into Maryland State Women’s Hall of Fame in 2011 “for her efforts to stem the HIV epidemic among young people.”

As a clinician-scientist, Peralta’s research on adoption of non-invasive and rapid testing for HIV and risk of acquisition of HIV and other sexually transmitted infections led to dozens of professional articles, book chapters and federal treatment guidelines.

Peralta also was the first Hispanic doctor to serve on the Presidential Advisory Council on HIV/AIDS in President Obama’s second term, which in 2015 announced an ambitious national strategy.

Peralta describes Casa Ruben as a gateway to primary care.

“What we do is open the door to the health care system,” she said. 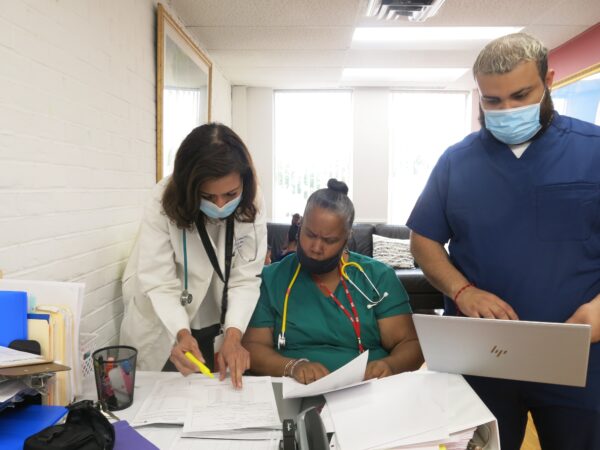 During office hours, Casa Ruben serves a non-stop flow of patients, regardless of whether they can pay. Photo by Rosanne Skirble.

Peralta often directs her patients who need additional treatment to Federally Qualified Health Centers, community clinics that receive federal funds and are required to serve all, regardless of immigration status or the ability to pay.

Maryland is home to 17 FQHCs with 129 satellite sites across the state.

“They are held to a federal standard [and] offer a range of very comprehensive services” said Sharon Zalewski, Executive Director of the Regional Primary Care Coalition, a non-profit that promotes health equity in the D.C. region. “The goal is to get people into a medical home, where they develop a relationship with a provider, and where they’re seen consistently for preventive services, as well as acute illness.”

This strategy, with fewer people using hospital emergency rooms for chronic conditions that could be better managed by a primary care doctor, also lowers the community’s burden to cover these expenses.

Zalewski adds that healthcare disparities are tied to inequities in education, the economy and housing.

That is what guides Peralta’s work serving communities in need like her father.

Having stepped away from her positions at the University of Maryland Medical School, Peralta divides her time between Casa Ruben and research she began in 2014 as a Sloan fellow in Innovation and Global Leadership at MIT. There she focused on health economics, which she said can help policy makers maximize resources for accessibility to health services.

“My lens when working with economists is looking at areas in medicine that could serve as a platform to break this inequity in healthcare,” she said.

At the height of the pandemic, Peralta said data on delays in routine vaccines among immigrant children moved her to ramp up vaccinations, efforts that led to 7,000 childhood immunizations at schools, churches, parks and second-hand stores.

Recognizing disparities in certain zip codes, the Montgomery County Council appropriated $450,000 this spring to Casa Ruben for a mobile pediatric clinic, a grant matched by the Robert I. Schattner Foundation.

Staff on board will offer routine medical exams for school enrollment, vaccinations, and connect children with comprehensive primary care near where they live.

“With this vehicle, medical services can reach many,” said Tania Perez-Fuentes, an educator with Montgomery County Public Schools, who testified at the hearing in support of the grant.

“This is exactly the kind of best practice that we have to maintain and we have to expand,” said Councilmember Nancy Navarro (D), who championed the measure.

“My parents inspire me,” she said. “I live by their values every day.”

Baker Determined Not to Repeat “Mistakes” From His First Gubernatorial Bid

Rushern L. Baker III is determined that his current gubernatorial campaign not be a replica of his 2018 run. Not just the losing part…