A year ago, State Highway Administration worker Ronnie Wright’s truck was rammed by pickup truck. Although the incident hasn’t changed the way he approaches his job, it’s not something he’s eager to experience again.

A facility maintenance technician based out of the State Highway Administration’s Howard County office, Wright performs a variety of jobs — a list that includes work on the sign crew, paving, and large-litter collection. He’s been with the agency for six years.

On March 29, 2021, a day before his birthday, Wright was driving a dump truck on the shoulder of westbound Route 70 when he was struck from behind by a vehicle that was being driven erratically.

Wright was pulling a truck-mounted attenuator, a pair of aluminum boxes surrounded by a thick steel frame. The devices essentially function as a crash-absorber on wheels. They’re designed to protect workers on high-speed roadways.

Wright was thrown into the steering wheel by the force of the impact, though he was not injured. A coworker in a truck in front of his grabbed a fire extinguisher to douse the flames.

“It was chaotic, because people were stopping. And where [the pickup] stopped, he was blocking two lanes of traffic.” 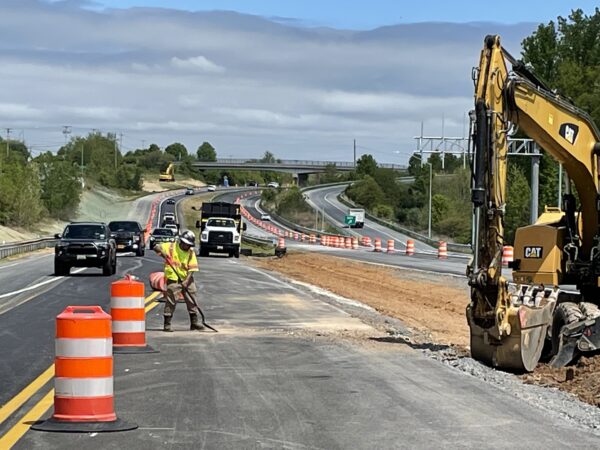 Motorists pass through a road-widening project on Route 32 in Howard County earlier this month. Photo by Bruce DePuyt.

According to the Maryland Department of Transportation, there were 7,704 work-zone related crashes in Maryland between 2016 and 2020, resulting in 46 deaths and 3,263 injuries.

Maryland law has long required motorists to change lanes or slow down when approaching police and fire vehicles that are on the side of the road with warning lights or flares. The legislature expanded the state’s “move over” law in 2018 to include service vehicles, disabled cars and trucks, and waste or recycling crews.

Motorists who violate the law run the risk of a $500 fine.

In April, MDOT and the Maryland State Police launched a campaign urging travelers to slow down, be alert and follow safe driving practices in work zones.

At a press conference near a Route 32 road-widening project this spring, Transportation Secretary James F. Ports Jr. said, “if we don’t all do our part, the men and women who are building these critical road projects will face unsafe drivers — drivers who are distracted, multi-tasking, speeding, driving unsafely — within inches of the 50 workers that work here each and every day.”

Ports said 80% of the people killed in work-zone crashes are drivers and passengers in vehicles traveling through construction areas.

When Wright was asked by a reporter to craft a safety message for use on MDOT’s overhead road signs, he declined. “I wouldn’t be able to put on there what I wanted,” he said with a laugh. “I don’t think it would go over.”

He said highway workers routinely observe drivers who aren’t giving their complete attention to the road. “The distraction factor is insane,” he said.