The 2022 Atlantic hurricane season is predicted to be the seventh in a row with an above-normal number of storms, according to a forecast the National Oceanic and Atmospheric Administration released Tuesday.

NOAA administrator Rick Spinrad said the agency expects there will be between 14 and 21 named storms, with six to 10 of those storms turning into hurricanes.

Between three and six of those hurricanes are expected to develop into major storms that reach a level of Category 3 or above — when winds reach 111 to 129 mph and devastating damage occurs.

The likelihood for another active and likely catastrophic Atlantic hurricane season means another challenging year for emergency management officials throughout the United States.

The 2022 Atlantic hurricane season forecast shows the number and severity of tropical storms will be similar to last year, during which the United States experienced 21 named storms, including seven hurricanes — four of which developed winds of at least 111 mph. 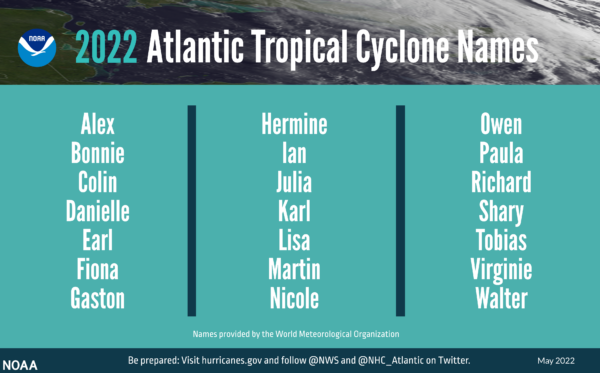 A summary graphic showing an alphabetical list of the 2022 Atlantic tropical cyclone names as selected by the World Meteorological Organization. The official start of the Atlantic hurricane season is June 1 and runs through November 30. NOAA graphic.

Federal Emergency Management Agency Administrator Deanne Criswell used the annual forecast release to urge residents throughout the country, not just those in coastal areas that regularly experience tropical storms, to prepare for emergency situations, including evacuations.

“We’re looking at another similar season for hurricane preparedness, but that doesn’t mean we should take it lightly,” she said. “As we saw from Superstorm Sandy, it doesn’t even have to be a hurricane to cause such devastation to communities.”

Criswell cautioned that FEMA has noticed these tropical storms are developing faster and more frequently, meaning state and local emergency managers have less time to warn the public.

That then means the public has less time to gather emergency supplies and evacuate or head to a storm shelter.

Climate change is part of the reason the Atlantic hurricane seasons as well as other climate and weather events are becoming more frequent and more severe, though Spinrad cautioned that forecasters “can’t simply point to a particular storm — whether it’s a strong storm like Ida or any others — and say there, that is climate change.”

“The attribution is more in the patterns, the tendencies, the mode that we’re in,” he said, noting that all the factors NOAA listed in its forecast are components of climate change.

Criswell said FEMA is working with communities to address how climate change affects their residents during hurricane season.

“We’re seeing such a dramatic change in the type of weather events that we’re facing as a result of climate change that we really have to get ahead of that,” Criswell said. “One of the biggest things that FEMA is doing is putting a lot more emphasis on the other parts of our mission, which is about preparedness and mitigation.”

Hurricane Ida was responsible for more than 85 deaths in the United States, including a Rockville 19-year-old who died when his apartment complex flooded by remnants from the storm, which also spawned a tornado in Anne Arundel County.

Criswell also noted that individual preparedness ahead of hurricane season’s official start on June 1 is crucial to keeping people and property safe during hurricanes and the storm surges that often accompany them.

“The majority of fatalities we see from hurricanes come from storm surge,” Criswell said. “Again, it’s incredibly important that individuals take time to understand what their risk is.”

Last year the United States dealt with 20 billion-dollar weather and climate disasters that led to 688 direct or indirect deaths, according to a report from the National Oceanic and Atmospheric Administration’s National Centers for Environmental Information.

The storms caused about $145 billion in damages, with Hurricane Ida, which made landfall in Louisiana in August, contributing to $75 billion, the mid-February winter storm and cold in Texas and the Deep South accounting for $24 billion and Western wildfires causing $10.9 billion.

The frequency and severity of extreme weather events during 2021 was “concerning because it hints that the extremely high activity of recent years is becoming the new normal.”

As FEMA faces a grueling summer disaster season, the agency is also asking Congress for more money in the coming years to address the ever-increasing number of disasters it responds to.

FEMA has recently managed more than 300 disaster declarations a year, a dramatic increase from the average of 108 disasters it responded to just a decade ago.

U.S. lawmakers provided the agency with $23.9 billion for the current fiscal year, a $2.19 billion boost from the prior year.

But still more is needed, officials say, leading FEMA to request Congress increase its funding during the next fiscal year, slated to begin in October, to $25.1 billion in discretionary spending.

FEMA officials have yet to testify on Capitol Hill about the request, though some lawmakers are questioning the way the agency responds to natural disasters and how it revised the National Flood Insurance Program.

A handful of Democratic lawmakers have introduced legislation they say would address “systemic inequities” in who receives FEMA support.

“For decades, we have seen low-income communities and communities of color left behind after a disaster strikes,” said Rep. Bennie G. Thompson, a Mississippi Democrat. “It’s past time that the federal government — and particularly the Federal Emergency Management Agency — makes disaster assistance equity a real priority to reduce barriers to recovery.”

FEMA has taken some steps under the Biden administration to address how it distributes federal disaster relief. That includes broadening the types of documents individuals could use to prove they owned or rented a house ahead of a disaster.

Criswell told U.S. House lawmakers in April that policy changes made last year when FEMA was heading into hurricane season led to “42,000 homeowners being eligible for disaster assistance from us that we would have previously denied.”

“I think making these simple policy changes that we did last year made a tremendous difference,” Criswell said, adding FEMA is looking at making other long-term changes to continue building equity into disaster response.

The new policy allows homeowners or renters to use state motor vehicle registration forms and utility bills to prove where they lived ahead of a natural disaster.

Thompson, chair of the U.S. House Homeland Security Committee, said that while he’s glad the Biden administration has made “many positive changes,” he wants to see the new programs made permanent and for FEMA to expand on its efforts.

The bill would require the FEMA Administrator to work with the Housing and Urban Development secretary and Small Business Administration administrator to create and implement “a process to ensure equity” throughout all programs.