Crime is beginning to dominate the conversation among city officials in Baltimore and Democrats seeking to become governor.

Baltimore’s murder count for 2022 continues to rise and, at a Thursday news conference, city councilmembers called for Mayor Brandon Scott (D) to act.

Costello said that the city is on track to reach 350 homicides in 2022 — a grim record.

According to The Baltimore Sun Homicide Database, 125 homicides have been reported since Jan. 1. Costello said that this is “the first time in the history of the city of Baltimore” that the count has been higher than 100 so early in the year.

He also said that 17% of Baltimore’s Citiwatch cameras are inactive.

A budget hearing is scheduled for June 7.

On Wednesday, Scott and Harrison announced their “Strategic Management & Alternative Response Tactics,” or “SMART,” policing plan, which will divert certain behavioral health, traffic accident and other non-emergency calls away from sworn police officers and toward social workers, contractors and others.

“Building real public safety requires us to develop legitimate solutions to more efficiently, more effectively, and appropriately deploy law enforcement resources when and where needed,” Scott said in a statement on Wednesday.

Costello said that the councilmembers’ Thursday news conference was not in response to Scott’s announcement. However, he added that the mayor’s policy “is directly in conflict with what we’re all talking about.”

Middleton, the council’s vice president, said that it’s imperative to have more officers patrolling neighborhoods, whether by foot or car.

“We need consistency and that’s not happening now,” she said.

Stokes said that he has asked about having Maryland State troopers deployed to patrol communities. He said that the city’s 14th district only had 14 officers assigned to patrol the whole area.

“​​That’s why I’m reaching out to ask the governor to give us some more resources because the police can’t do this by themselves,” he said.

But Costello said that the request for additional resources “needs to come from the executive branch.”

“We can stand up here and scream and cry and complain and curse and so on and so forth about the need for more resources,” he said. “The governor, the superintendent of the State Police, is not going to listen to the Baltimore City Council.”

Asked if the councilmembers have spoken with the Scott administration in regard to their requests, Costello responded “ad nauseum.”

Asked to comment on the councilmembers’ criticism, Scott’s office provided a statement from the mayor.

“Sustainably reducing violence isn’t easy, and despite what some people would have us believe, there is no quick fix or magic button that will stop people from shooting each other overnight,” he said. “As the Council is keenly aware, I remain focused on doing everything in my power to address the violence that takes residents away from their families and loved ones and traumatizes communities throughout Baltimore. I would only ask them to stay engaged in this critical work and match my urgency and effort in bringing real change for our residents.”

Meanwhile, some Democratic candidates for governor have been promoting their plans for reducing crime in recent days. 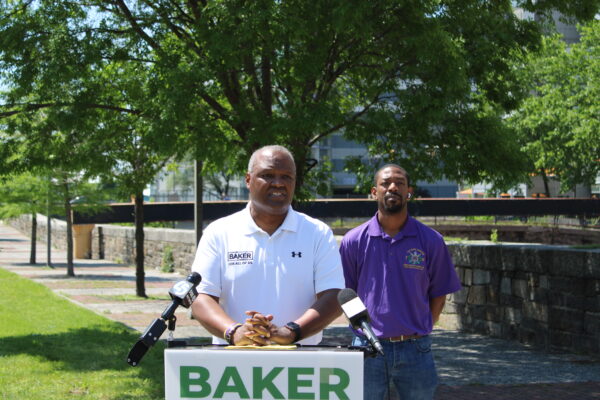 “We know that the mayor is doing what he can. We know the city council are doing what they can, but this is a state issue,” said Baker, one of more than a dozen candidates vying to be Maryland’s next governor.

Baker wants to make it illegal to solicit motorists to pay for window cleaning but also wants to provide the squeegee boys with state jobs and opportunities to attend schools within the University System of Maryland for free.

Baker also wants to offer an entrepreneurial track for those boys and men and provide grants for them to start their own businesses.

To enforce his proposed ban, Baker wants to deploy state troopers in the city to issue fines and warnings. According to a news release, repeat violators will be prosecuted.

Asked how he settled on fining kids under 18, Baker said that often, they see squeegeeing as the only option to make money.

“What we have to do is show that there’s something else,” he said. “So, it’s less about the fine, it’s more about we’re gonna get you off the street because there are alternatives here.”

Baker has not discussed this plan with the Scott administration.

While Baker wants to remove squeegee guys from city roads and put them on a path to better careers, Talbot County State’s Attorney Scott G. Patterson (D) is backing former Attorney General Douglas F. Gansler (D) to be Maryland’s next governor based on his concern for public safety.

Patterson said Thursday that he sees Gansler as someone who believes that “we have too many people in jail, and I know that he believes that the people that should be in prison and jail are the ones that are violent offenders that make it unsafe for the citizens to live their lives peacefully, raise families, and conduct their businesses.”

And Comptroller Peter V.R. Franchot, another Democratic candidate for governor, began airing a digital ad this week featuring the Rev. Alvin C. Hathaway Sr., a prominent Baltimore minister, describing why he thinks Franchot is the candidate who is best-equipped to make the city safer.