If Wednesday’s “1000 Women for Peter Franchot and Monique Anderson-Walker Luncheon” was a test run for the July 19 primary — to see whether the comptroller’s gubernatorial campaign can mobilize its supporters when needed — the event was a runaway success.

No small feat on a weekday afternoon.

“I was not exactly sure what to expect,” said Prince George’s County Council member Ed Burroughs III (D) afterward. He said the robust turnout was a sign the campaign is clicking. “There was a lot of excitement and optimism and hope about what the Franchot/Anderson-Walker team would bring to the state.”

The luncheon was a “people-raiser” — a rally, essentially — not a fundraiser. Campaign Manager Ben Smith said donations from “sponsors” were expected to cover the event’s costs, primarily the venue, a gourmet meal for 1,000+ people, and a DJ who spun both retro classics and contemporary hits. (More on him below.)

The campaign also provided transportation for attendees, many of them seniors, who live in the central and southern parts of the Prince George’s, the state’s vote-rich Democratic stronghold.

Former state Senator and Department of Aging secretary Gloria Lawlah (D), a lead organizer, said she had to turn people away due to space constraints.

“We had opinion leaders. We had old-timers who’ve worked civic associations. They’re in churches. They’re in their private clubs and organizations,” said Lawlah. “We tried to put the tables full of people who could influence other people’s opinion about voting for this ticket.”

“Seniors have been isolated,” Lawlah added, “so they were really ready to get out and have fun.” She predicted the luncheon will “generate a lot of energy for the campaign.”

Prince George’s is always a hotly-contested battleground and this year the competition is even more intense. Of the ten Democrats running for governor, three are Black, including former Prince George’s County Executive Rushern Baker. Another Black candidate, Wes Moore, has the support of Prince George’s County Executive Angela D. Alsobrooks (D) and State’s Attorney Aisha N. Braveboy (D). Two other gubernatorial contenders are candidates of color. Most of the white candidates have chosen running mates of color.

The “1,000 Women” program included an opening and welcome, an invocation/blessing, music, two greetings, introductions, speeches and a keynote address. Many attendees headed for the exits after Franchot gave his stump speech.

The comptroller offered a grab-bag of promises that included improved access to health care, borrowing help for would-be homeowners and “hundreds of thousands of new family-supporting jobs.” He drew applause when he said that during his first three months in office, state employees would focus on fixing potholes, clearing roadside trash and answering the phone.

“If you think I’ve done a good job as your comptroller,” Franchot said, “the people of the state of Maryland ain’t seen nothing yet. This is going to be a transformative experience.”

Franchot gave out his personal cell phone number during his remarks, as he often does. (He noted that he doesn’t have Gov. Lawrence J. Hogan Jr.’s cell number, even though the two have served together on the Board of Public Works for seven years. “You have to call staff and work up through the ranks. No, you can can call me directly.”) 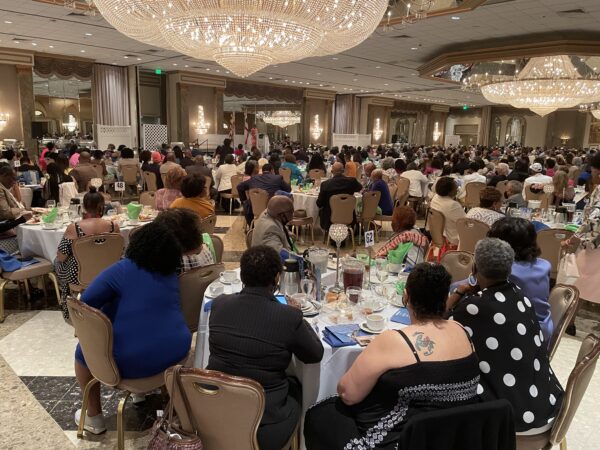 Anderson-Walker spoke movingly of her parents’ influence on her life, and she offered a recital of her work in Upper Marlboro and Annapolis, with some criticism of her former council colleagues sprinkled in. She faulted them for attempting to raise property taxes during the pandemic and for pursuing a redistricting plan that critics said protected incumbents. There were murmurs of approval through the room.

Her praise of the four-term tax collector included the dubious claim that he is “largely responsible” for Maryland’s $8 billion surplus. “He doesn’t answer to anybody,” she said. “What excited me about Peter was that he’s a standup person.”

Franchot and Anderson-Walker were effectively upstaged by an introductory speaker, Del. Darryl Barnes (D-Prince George’s), the long-serving head of the Legislative Black Caucus.

Working in tandem with DJ 21 Flavors, Barnes (whose walk-up music was Kendrick Lamar’s “Be Humble”) offered a warning for the other gubernatorial campaigns.

“I want you to let them know,” Barnes roared, as the Teddy Pendergrass version of “Turn Off the Lights” played, “they might as well turn off the lights.”