Federal highway officials have given the go-ahead for Maryland to move forward with plans to build a new Chesapeake Bay crossing near the existing Bay Bridge spans.

The Maryland Transportation Authority studied 14 potential options for a new bridge before selecting “Corridor 7,” the area adjacent to the two spans that connect the Annapolis area and Queen Anne’s County.

In approving Maryland’s “Tier 1” analysis, federal officials paved the way for the state to advance to the next phase in the process. A “Tier 2” study would produce an exact location for a third span, “within the two-mile-wide Selected Corridor Alternative.”

The next study would also consider a broad range of environmental and traffic impacts associated with construction and operation of a new bridge and the state would be required to identify its funding source. There would also be an analysis of how traffic and the environment would be impacted by a decision not to expand capacity.

The Federal Highway Administration issued its “record of decision” in tandem with a final environment impact statement on April 14. The MDTA released it on Thursday.

Many Anne Arundel and Queen Anne’s residents oppose a third span near the existing crossings. They argue that Routes 50 and 301 and arterial roads are already jammed with “through” traffic, particularly during the morning and afternoon commutes and on weekends during beach season. They complain of being virtual prisoners in their neighborhoods and of emergency vehicles that get delayed in miles-long traffic backups.

In October, the Anne Arundel County Council approved a resolution to replace the currents spans with a single bridge, with at least eight lanes, at the same location. Council members said that option represented “the best solution to maintain forward progress, support the investments already made along the US Route 50/301 corridor… and address the existing and future traffic capacity shortfalls.”

But Anne Arundel County Executive Steuart Pittman (D) said on Thursday “we would have preferred a crossing that would draw traffic to other corridors.”

“[W]e must now work to ensure that the next phase of study protects our existing communities and environmentally-sensitive areas,” he said in a statement. “We must also explore future traffic patterns along the whole Route 50 corridor, including options for public transit, shifts from sprawl development to smart growth, and telecommuting. We must not build yesterday’s bridge tomorrow.” 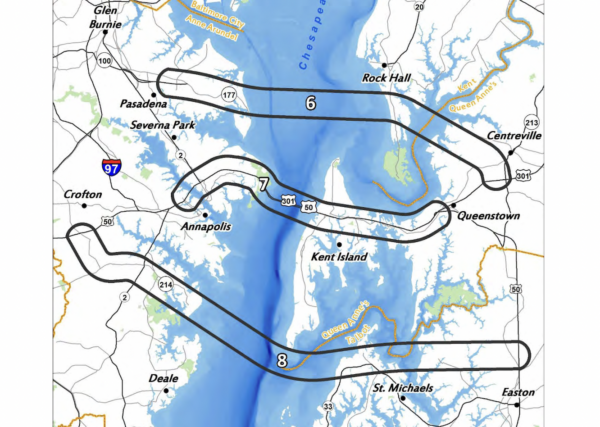 The Federal Highway Administration, working with the Maryland Transportation Authority, chose “Corridor 7,” near the existing Bay Bridge, as the “preferred” corridor for a new span. Image from baycrossingstudy.com.

In reaching their conclusion that Corridor 7 is the best option, analysts concluded that it would draw more vehicles away from the current crossings than a new bridge further north or south.

A new bridge near the existing spans would be significantly shorter than neighboring alignments because the bay is narrower there. A third span would run approximately four miles, roughly one-third of the length of the closest alternatives.

“Corridor 7 would require a much shorter crossing of the Chesapeake Bay compared to Corridors 6 and 8, which would potentially result in lower impacts to the open water of the Bay and other major waterways,” the study found. “A longer crossing would require greater impervious surfaces, more substantial construction, and a greater overall footprint of area impacted in the Chesapeake Bay and other major water bodies.”

Traffic is expected to grow as more housing developments go up on the Eastern Shore, though the growth in telework could blunt some of that increase. The study’s authors said “it is too soon to define or to accurately assess the long-term impacts” of pandemic-induced changes in commuting patterns.

Whether Maryland moves forward with a Tier 2 National Environmental Policy Act (NEPA) analysis is unclear. Such studies run into the tens of millions of dollars and the Hogan administration has yet to commit the necessary funds.

An MDOT spokesperson declined to say on Thursday whether Maryland will move toward a Tier 2 study or leave it to the next administration. Two years ago, Gov. Lawrence J. Hogan Jr. (R) said he would only accept one of the 14 alignments being studied — Corridor 7.

“There is only one option I will ever accept: adding a third span to our existing Bay Bridge,” Hogan wrote on Twitter. “While the federal process requires multiple proposals, the data is indisputable — this option would maximize congestion relief & minimize environmental impact.”

A Tier 2 study would cost between $35 million and $45 million, said James Moran, chair of the Queen Anne’s Board of County Commissioners, who also favors a single replacement span. “We want the governor to put that in the budget,” he said. “We want no hesitation, because the longer this takes, the worse things get.”

Michael Ricci, a Hogan spokesman, said he “is pleased with this progress, and looks forward to reviewing next steps for moving the project forward.”

Moran also wants the state to seek federal funding for construction of the new span.

Jay Falstad, head of the Queen Anne’s Conservation Association, said the study’s acknowledgement that the future of telework remains unclear conflicts with the decision to move toward a third span. “If it’s too soon to define or accurately asses the long term impacts, then it’s too soon to move forward with a Tier 2 review,” he said.

A study commissioned by the conservation group and performed by Hanover, Md.-based AKRF concluded that the benefits of a new span would not last long because it would attract “new travelers.”

“The widening of the Bay Bridge would temporarily relieve congestion on the bridge itself, but not on the highways leading to it unless they were also widened,” the study’s authors concluded. “The additional traffic attracted to the wider bridge would correspondingly require widening of large stretches of US 50 in the years following the bridge project to avoid new traffic bottlenecks. Unfortunately, the extent and repercussions of this ‘induced traffic demand’ to roadways beyond the vicinity of the bridge were not considered in the DEIS.”