Editor’s Note: After the 2022 General Assembly session, Maryland Matters will feature stories about several retiring lawmakers. This is the second in a series.

From the back of the Senate chamber on Friday stood Sen. Charles E. Sydnor III (D-Baltimore County). ​​His eyes welled with tears as he clutched his desk microphone in his hand.

She will retire at the end of the term after a 32-year career in the General Assembly.

“Although I won’t be coming back to serve with you on the floor, I’m already working on study groups that we will have during the interim — January 1 hasn’t gotten here yet,” Kelley, 85, said in her farewell speech. “And there’s more to learn and there are people depending on all of us.”

Quiet but firm, Kelley led the Senate Finance Committee from the back of the committee room, watching members ping-pong arguments back and forth, stopping when things got too heated or time began to slip away.

According to her vice chair, Brian J. Feldman (D-Montgomery), Kelley is “tough, tough, tough” and not afraid to speak her mind.

“I sit next to her in that committee, and she is not shy to lean to her right and tell me her views about the bill and the sponsor’s presentation of that bill,” he said. “And unfortunately, during the Zoom era, … oftentimes that was caught on a hot mic.”

Kelley’s Senate colleagues characterize her as a mentor, a trailblazer, a lifetime learner and a “classy lady” who is willing to compromise with those she differs from ideologically.

Kelley is also a natural debater and made a name for Morgan State University’s debate team during her brief time as its director.

“They let it go when I left,” she said, laughing.

Senate Education, Health and Environmental Affairs Committee Chair Paul G. Pinsky (D-Prince George’s) told the Senate last week that there were several times when he found himself with his hand on his seatmate’s arm, whispering “you don’t need to get up.”

“​​But I can tell you when she has gotten up, and you listen to her argument … the logic and the intellectual glue that holds it together has always been astonishing,” said Pinsky. “…It might take a little while getting there but it is unbelievably coherent and logical, and it really reflects her being an intellectual.”

During an interview, Kelley said that the pride of her legislative tenure was her ability to serve on different state boards and commissions — her guess is that she’s sat on 50 or 60, including two stints with the electoral college and a spin as the secretary of the Maryland Democratic Party.

“I just have had so many opportunities to get to know subject matter I wouldn’t know as well as … I do,” she said.

Senate Minority Whip Justin D. Ready (R-Carroll) joked that he and other members of the Finance committee came up with an idea for a drinking game “because almost every issue that comes up, Senator Kelley said, ‘you know, I served on a commission,’ or ‘I went to this conference.’”

“I don’t find any issues that we have here which are dull or boring,” Kelley said last week. “Everything matters to somebody, and … there are people whose names you don’t know yet sitting somewhere worrying about an issue that you can help them to resolve.”

‘I had good role models’

Born in Norfolk, Va., during the Jim Crow era, Kelley was the oldest child of four.

According to her son Russell Kelley, his mother’s immediate family exuded excellence: Her father started a business building homes in Norfolk, Va., and her mother made the architectural drawings. Her brother has a Ph.D. in anthropology, one of her sisters became a doctor and the youngest child, Barbara Cuffie, broke down barriers in cybersecurity at the Social Security Administration.

“That’s the kind of family she comes from,” Russell said Sunday. 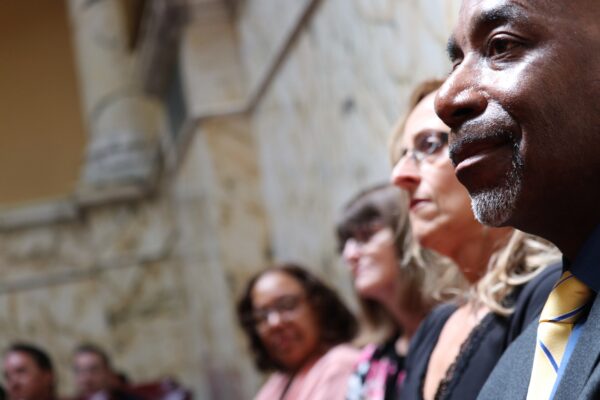 Russell Kelley listens on as his mother, Sen. Delores G. Kelley (D-Baltimore County) was honored in the Maryland Senate last week. Joining him on the Senate floor were his wife and long-time staff members for Kelley’s office and the Senate Finance Committee. Photo by Danielle E. Gaines.

She taught as a professor for 31 years and eventually served as dean at Coppin State College. She helped found the first full-service Maryland bank owned by people of color. She had an unsuccessful congressional run in the mid-1990s. And she’s served on enough committees, councils and commissions to make anyone’s head spin.

Kelley is also a mother of three and has been married to her husband, Dr. Russell Kelley, for 66 years.

“I had good role models,” she said.

According to Cuffie, Kelley came from a family that emphasized education.

Their father had a high school degree when he married their mother, who didn’t finish school. Before they died, he had a master’s degree and she’d received a doctorate from Johns Hopkins University.

Kelley’s other sister was one of the first Black people to graduate from the Medical College of Virginia.

Acknowledging the extraordinary challenges of entering into higher education during the civil rights era, Cuffie said during an interview Wednesday that their family often talked about racism — not from a perspective of hate, but of grace.

“My mother always talked to us about racism from a perspective of not anger, but that we needed to pray for people who did not understand that God made us just like he made everybody else and so we were, indeed, equal, regardless of how we were treated,” Cuffie said.

At the urging of her friend Sen. Rosalie S. Abrams (D-Baltimore City), Kelley initially ran for the House of Delegates in 1986 but was beaten by a few hundred votes. She won the seat in 1990 as a representative of Baltimore City.

Kelley’s first year in the General Assembly was similar to her last: abortion and redistricting both were big-ticket items. By the end of 1991, Kelley was drawn into a district that she said she had no shot at winning.

“At that time, Baltimore County had never had an elected official at any level who was not a Caucasian,” she explained. “So I said, ‘Well, I want to tackle that.’”

And she did. The Kelleys sold their house in Cross Country and moved to the county, where she assembled an all-Black ticket including herself as the Senate candidate and Emmett C. Burns Jr., Shirley Nathan-Pulliam and Joan N. Parker for the House of Delegate seats.

They won the 1994 election, and three of the four went on to have extended tenures in the State House. But Parker died of cancer halfway through the first term, “so I had to then look for someone to replace her and to get them through the Central Committee,” Kelley said.

“She was the head of the Office of Fair Practices, and so I talked her into joining the ticket and the Central Committee approved that, and see what she’s done,” Kelley said proudly.

Kelley rejects the notion that she is a person of influence.

“I just am a person looking, constantly, at systems to see how people who could do certain things ought to have an opportunity to move and to do more than maybe what they were thinking of,” she explained.

Like Jones, Senate President Bill Ferguson (D-Baltimore City) was one of those people.

She worried, as ailing Senate President Mike Miller (D-Calvert) prepared to step down from the chamber’s top leadership position in 2019 after three decades, that worthy candidates weren’t in the mix to replace him. She worried about too much influence from business and other interests taking root in the senate president’s office.

So she began to look back at how her colleagues had voted on certain issues and found Ferguson, a young attorney from Baltimore City who had participated in Teach for America. She started advocating for him in the role, which soon came to fruition.

With an affection for Kelley, Ferguson said last week that her departure is tough to handle.

“Senator Kelly, in her tenure, will go down as a history maker — as someone who every single day fought for justice for all,” he said.