The General Assembly gave final approval on Friday to a package of bills intended to usher in an era of legalized marijuana in Maryland.

One of the measures represents a downpayment of sorts on the policy implications related to legalization, including how much marijuana an individual can possess (up to 1.5 ounces) and how much they can home-grow (two plants).

Another bill — which is not subject to a potential veto from Gov. Lawrence J. Hogan Jr. (R) — establishes a voter referendum this November. Polls suggest it will pass overwhelmingly. The policy measure only takes effect if voters approve the referendum.

On paper, passage of the measures after months of work represented a historic milestone for legalization advocates. But there was little popping of champagne corks in the halls of the State House. 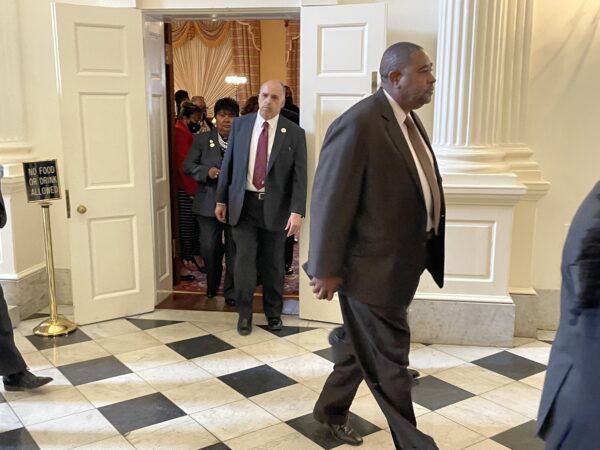 Members of the large and influential Legislative Black Caucus — which is made up mostly of members of the House of Delegates — grumbled about changes adopted by the state Senate. Their displeasure, which bordered on despondence, greatly undercut any sense that Friday represented the start of a new era.

The House floor session was delayed so the caucus could hold a closed-door meeting. According to lawmakers who attended the session, participants voiced objections about Senate amendments — in particular, those that increased the penalties for smoking marijuana in public.

They also would make it illegal to smoke marijuana while driving a motor vehicle. In addition, the Senate mandated that the attorney general look at how legalization would impact the ability of police officers to conduct searches of people and cars based on the smell of marijuana.

The House Judiciary Committee voted to accept the changes and the measure passed on a largely party line vote on the House floor. But several Democrats who felt betrayed by the decision to accept the Senate amendments vented their frustration before the final vote.

“We cannot allow enhanced fines to be the way to go,” she added. “Nonetheless, we will not let the unfortunate mischief of the Senate prevent us from doing some necessary good for the good people of Maryland.”

She voted in favor of both bills.

Del. Gabriel Acevero (D-Montgomery), a legalization proponent, voted against the policy measure but in favor of the referendum.

“While I support cannabis legalization, we are once again leaving the communities most harmed by the intentional war on drugs behind,” he said. “This bill falls short of what is owed to our communities, of what reparative justice looks like. … We should be doing more.”

Del. Jazz Lewis (D-Prince George’s) defended the compromise. “We can’t let perfect be the enemy of good for progress.” Noting that 15,000 Marylanders are arrested each year for possession of small amounts of marijuana, Lewis said, “This moves us forward towards not having that be the reality.”

The policy bill, House Bill 837, passed 89-41, with several Democrats defecting and Del. Jay Jalisi (D-Baltimore County) declining to cast a vote due to what he called a religious exemption. The referendum bill, House Bill 1, passed 94-39.

The policy bill was slated to be included in a batch of bills to be formally presented to Gov. Lawrence J. Hogan Jr. (R) by the close of business on Friday. By meeting that statutory guideline, lawmakers guaranteed themselves the opportunity to override a veto this session if Hogan rejects the measure.

Davis voted against Senate alterations to both measures. In an interview after the floor session, she said that the penalties for possession of more than 1.5 ounces lead her to believe that cannabis will not truly be legalized. 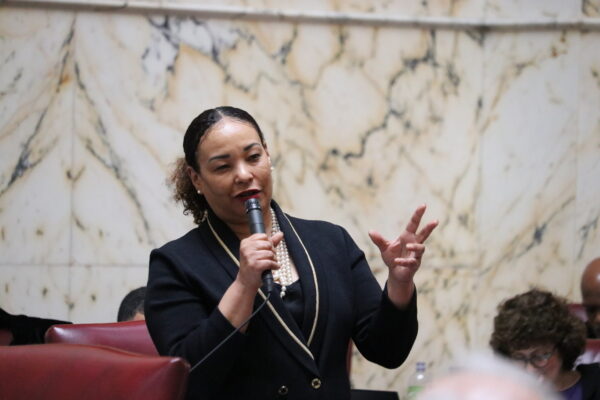 During a floor speech, Carter said she is “philosophically” supportive of legal recreational use, but she voted against the Senate version of the policy bill, Senate Bill 833, on “principle.”

“For all of the people, all of the communities, all of the 92% of Black people that have been criminalized because of marijuana prohibition… I just can’t in good conscious support this bill,” she said.

Carter said Senate Bill 833 favored “the wealthy,” without doing enough to lift up Black and Brown communities who have been most impacted by the war on drugs. She also said that minority-owned businesses and low-income communities have not benefitted from the state’s five-year-old medical cannabis industry.

She said the bill doesn’t set up licensing and regulation procedures, nor does it “guarantee or even promise that that will happen eventually.”

“A wise man once said that if you stick a knife in a person’s back nine inches and then pull it out six inches, you’re not doing them any favors,” Carter told the chamber. “Even if you pull the knife all the way out, that’s not progress.”

During a news conference Friday afternoon, Senate President Bill Ferguson (D-Baltimore) said that he has “a deep amount of respect” for Carter’s passion for equity, but the legislature was not prepared to tackle all of the issues until a disparity study is completed.

“At the end of the day I’m proud of where we landed and respect Senator Carter’s opinion… without any doubt,” he said. “But I think that compromise is what moves the ball down the field and that’s where we got this session.”

Republicans were a non-factor in Friday’s flurry of votes.

“Can somebody tell us what this does?” Del. Kathy Szeliga (R-Baltimore County) asked while the vote was being tallied on the policy bill. “Why didn’t we slow this down?” Her questions were ignored.

Del. Susan McComas (R-Harford) said she opposed the policy bill “because I have just seen the bill and it has not been explained to me.”

Proposed changes to medical parole include inmate being released at any time; geriatric parole eligibility every two years for those 60 and older.