The Maryland General Assembly passed a $61 billion budget Friday that includes expansions of health care services, investments in public education and assistance for vulnerable residents, and accounts for tax cuts on baby and health care items, as well as for older Marylanders.

The budget bill’s passage marked an extraordinary budget season in the General Assembly, which included three supplemental budget proposals from Gov. Lawrence J. Hogan Jr. (R) within the past week that added more than $3.8 billion to the spending plan.

The state’s operating budget for the fiscal 2023 year, which starts July 1, will increase 10.5% from the current year.

Even so, the budget includes a $211 million surplus and maintains a $2.4 billion Rainy Day Fund balance, which lawmakers called a “prudent hedge against potential uncertainty.”

The budget was made possible by higher-than-expected tax revenues and federal stimulus funding, and allowed lawmakers to reach agreements on long-sought policy proposals, including the tax benefit for retirees, a priority for Gov. Lawrence J. Hogan Jr. (R).

“Combined with $100 million gas tax suspension that we recently together enacted just few weeks ago, we’re delivering nearly $2 billion in tax relief during this legislative session alone,” Hogan said. He said the retiree tax credit was the “largest tax cut in state history.”

That tax benefit — which applies to all Marylanders 65 and older — is expected to create a $1.55 billion reduction in taxes over the next five years by creating a tax credit of up to $1,000 for an individual and $1,750 for a couple.

The credit would be limited to residents 65 and older who make less than $100,000 in federal adjusted gross income annually, or couples earning less than $150,000.

Other tax bills signed into law included top priorities of General Assembly Democrats. One is a state-level expansion of the federal Work Opportunity Tax Credit, which provides a tax credit to employers who hire workers who historically have trouble finding work. The other is a package of “family budget boosters” that would exempt some medical, personal care and child care products from the state’s income tax, including diapers, car seats, baby bottles, dental hygiene products, diabetic care items and some medical products like thermometers, pulse oximeters, and medical-grade face masks.

“We know that there are still families and individuals who are still struggling to put food on the table and afford basic necessities,” Jones said. “We’re using the state’s historic budget surplus to support these Marylanders most in need.”

Ferguson used the bill signing to highlight the legislature’s recent passage of bills that are now up for consideration by Hogan, including a statewide paid family and medical leave program and major climate legislation.

Those bills, as well as several others, were expected to be formally presented to the governor’s office on Friday, starting the clock on a constitutional rule that will require Hogan to act on the bills before the 90-day legislative session ends April 11.

Because it is an election year, any bill vetoed by Hogan this year could not be overridden next winter, prompting a higher-than-usual number of early presentments and giving the last few days in Annapolis a Sine Die-like feel.

“This has been an exhausting, but vital week for the Maryland General Assembly as we race to meet today’s early presentment deadline. In the last five days alone, both chambers came together, working out differences on transformative legislation that will continue to make Maryland a national leader on a number of issues,” Ferguson said, as Hogan stood feet away.

The governor has blasted the climate bill as an “energy tax” (though it includes no tax increases), but his office has not publicly commented on how he will address a number of the items pending. 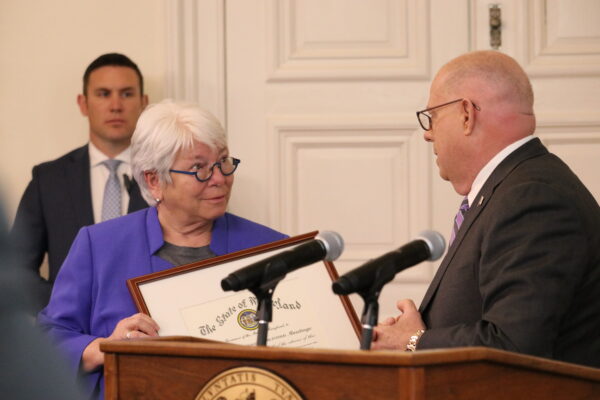 During the Friday bill signing, Hogan surprised retiring House Appropriations Chair Maggie L. McIntosh (D-Baltimore City) with a governor’s citation to honor her 30-year tenure in the House of Delegates.

The governor and presiding officers also announced that they would sign House Bill 1469, which will establish the Maggie McIntosh School Arts Fund to direct $250,000 a year to arts projects in Baltimore City public schools.

“We haven’t always agreed but I’ll tell you what, I have so much respect for you and your 30 years of service and the work you’ve done as chair,” Hogan said. McIntosh was lauded with a standing ovation from lawmakers in the room for the bill signing ceremony.