Many in the Annapolis Republican establishment headed to a waterfront hotel on Tuesday to celebrate former Commerce Secretary Kelly Schulz’s campaign for governor — including her old boss, Gov. Lawrence J. Hogan Jr. (R).

Hogan and Schulz appeared arm-in-arm at the event, in which Hogan gave his “enthusiastic, 100 percent endorsement” of Schulz.

She told the assembled crowd, which included several Republican lawmakers and current and former members of Hogan’s cabinet, that her campaign could make history as the first woman to become governor and the first to notch three consecutive terms in the governor’s mansion for the Republican party.

Schulz, who resigned from the Hogan administration in January to focus on the campaign, listed tackling crime as a top campaign priority “because nothing else matters” if people “do not feel safe when we walk outside of our house.”

She said the first tenet of her campaign will be to “treat the criminals like criminals and the police officers like heroes.”

Hogan, who is term-limited, said of the 16 candidates running for governor, “15 of them want to take us in a completely different direction.”

“I don’t know why, because more than 70% of the people in the state approve of the job that the Hogan-Rutherford administration has been doing and that Kelly’s been a part of,” he said. (The governor’s approval rating in the most recent Goucher Poll was at 65% and has remained high throughout his tenure.)

Schulz faces three other candidates in the Republican primary, including Del. Dan Cox of Frederick County, who has been endorsed by former President Donald Trump.

Asked whether she is concerned about the former president’s influence on party voters, Schulz deflected.

“I’ll let the political analysts deal with what that looks like,” Schulz said.

Instead she would remain focused on “the fact that I get the most popular governor of the state of Maryland” endorsing her campaign and talking about improving the state’s business climate, Schulz said. 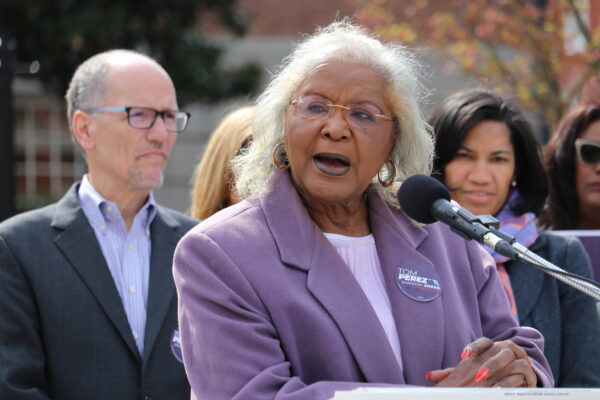 Perez said such a platform is necessary now because “this pandemic has disproportionately touched women.” He noted that women left the workforce in higher numbers during the pandemic, accounting for 90% of job losses one month.

State Sen. Joanne Benson (D-Prince George’s), a co-chair of “Women for Tom,” spoke at Tuesday’s event. She said that Perez “has his arms around” the issues facing women and families, and harkened back to the way he stepped in to help his family when his father died at a young age.

“He understood the struggles of a woman, his mother, and he did all that he could to ensure that his mother did not have to worry about much of anything,” Benson said. “But it doesn’t stop there. …And if you look at his track record, you will see what he did in the way of helping the working people, helping the women, helping the children, helping the senior citizens, the disabled, and the list goes on and on.”

The full agenda is online.

Neuman says she was slighted by teachers

Laura Neuman, the only woman running for the Democratic nomination for governor and a late entrant into the 2022 campaign, said Tuesday that she has been unfairly excluded from the Maryland State Education Association’s endorsement process.

The coveted endorsement for governor is expected to be announced in early April and follows an extensive vetting process.

“The MSEA required a 20-page, 40-question application which, as a late entrant to the race, I was unable to research and complete by their deadline. The due date was Jan. 25, which was 12 days after announcing my candidacy,” Neuman, who previously served as Anne Arundel County Executive as a Republican appointee, said in a press release Tuesday.

Neuman said her campaign was focused on building basic infrastructure at the time. While she conceded that the union “made an effort to accommodate my truncated timeline,” the extension was “a matter of days.”

To protest the process, Neuman posted the blank questionnaire on Facebook on Tuesday. She also questioned the tone of the survey.

“As you will read, the language is meant to influence the response. The MSEA has a responsibility to advocate for the rights of teachers and they rightfully should take a hard stance on certain issues,” Neuman wrote. “It is unfortunately not written in the spirit of collaboration, and it prescribes the union as the decision-maker on education policy, rather than elected leaders.”

In a statement, Neuman encouraged teachers to reach out to her if they wanted to discuss the endorsement process or what her answers on the questionnaire would have been.

In an unusually blunt statement, Maryland State Education Association President Cheryl Bost said Neuman’s campaign had more than a month to complete the questionnaire and received multiple reminders along the way.

Neuman also “accepted and respected” the outcome in late February when she was informed she missed the endorsement deadline, Bost said.

“We appreciate Ms. Neuman’s pointing out how thorough and extensive our process is,” Bost said. “However, as educators, we know that homework has deadlines and failing to turn things in has repercussions. We were eager to hear what Ms. Neuman had to say and are disappointed that she seems to be taking more time trying to get attention for not seeking the endorsement of educators than actually doing the work to win our endorsement.”

An endorsement in District 43

State Sen. Mary L. Washington (D-Baltimore City) offered her first primary season endorsement to one of the nonincumbent candidates seeking a House seat in her district.

In an email to supporters, Washington said she is backing Logan Endow, an economist, health policy expert and community activist, for one of two House seats up for grabs in the newly-drawn District 43A.

In the email, Washington notes that two of the district’s House incumbents, “[m]y friends and colleagues Maggie McIntosh and Curt Anderson are retiring and for [the] first [time] in more than two decades neither of their names will be on the ballot.”

“I believe our member of the House of Delegates should be among the next generation of leaders who are up to today’s challenges and who [are] also willing to grow and lean into the work,” Washington wrote. “Who are Baltimore through and through, but who will also bring national and global experiences and education that will enable them to be [a] strong and respected advocate and policymaker.”

Washington said Endow “has a deep sense of integrity and doing what is right for the right reasons. Logan Endow’s sense of community, resume and accomplishments are what Baltimore wishes for all the young adults in this city. He and people like him give me hope.”

Under the new legislative district map put into place by the General Assembly, Washington’s Senate district, which has been wholly within Baltimore City, will run approximately from the campus of Johns Hopkins University up Charles Street and into Towson, in Baltimore County. Though the Maryland Court of Appeals could change the district boundaries, the district as newly drawn has two House seats in the city and one in the county.

First-term Del. Regina T. Boyce (D) is the only incumbent seeking reelection in District 43A, but the Democratic primary has already attracted several candidates: Reginald Benbow, a public school teacher; Elizabeth Embry, an assistant state attorney general who was a candidate for lieutenant governor in 2018 and a candidate for mayor two years earlier; Sherricka McGrier-Douglas, a substitute teacher; and Rikki Vaughn, a businessman who launched a mayoral bid in 2020 but dropped out of the race before the Democratic primary.

In District 43B, the Baltimore County portion of Washington’s Senate district, Del. Cathi Forbes (D), who was appointed to the seat in 2019, is seeking a full term.

After the “Crossover Day” deadline in the General Assembly, the gubernatorial campaign of former U.S. Education Secretary John King (D) and his running mate Michelle Siri released a list of bills the ticket has advocated for so far this session.

Siri, the executive director for The Women’s Law Center of Maryland, testified in favor of House Bill 937, which would expand access to abortion services in Maryland, and Senate Bill 275, which would establish a family and medical paid leave insurance program in the state.

King testified in favor of a measure that would have allowed teachers to negotiate for smaller class sizes during the collective bargaining process. The bill has so-far not moved forward in either chamber.

He also testified in favor of Senate Bill 831, a bill that would provide bonuses to and establish a workgroup to study future wages for education support professionals. The Senate passed the measure, which has not moved forward in the House.

He opposed a bill from the Hogan administration that would have expanded Maryland’s Broadening Options and Opportunities for Students Today, or BOOST, program. The bill to expand the publicly funded private school voucher program has not moved forward in the legislature, and budget negotiators are considering whether to fund the program in the future.