“The hammer is going to come down, because we’re not going to tolerate it,” said Franchot, the state’s four-term comptroller and a candidate for governor. “We have the authority to take their license away.”

“The hammer is our knowledge of what is appropriate and what is fair,” he added.

Franchot made his comments moments after Gov. Lawrence J. Hogan Jr. (R) and leaders of the Maryland legislature signed a measure that allows station owners not to remit the 36-cent-per-gallon tax to the state. The General Assembly approved the tax-relief measure unanimously in the hopes that station owners will pass along the savings to consumers.

Franchot was quick to add that he doesn’t expect his office to need to crack down on station owners, who he said are “wonderful” and “patriotic.”

“They’re the embodiment of capitalism and competition,” he said. “They’re good people, they work hard. They want to do the right thing.” Franchot said motorists will flock to stations that have lower prices than the competition, which will encourage lower prices across the board.

State leaders cast the gas tax holiday as a way to support the people of Ukraine. Crude oil prices have spiked since the U.S. imposed a ban on Russian imports. 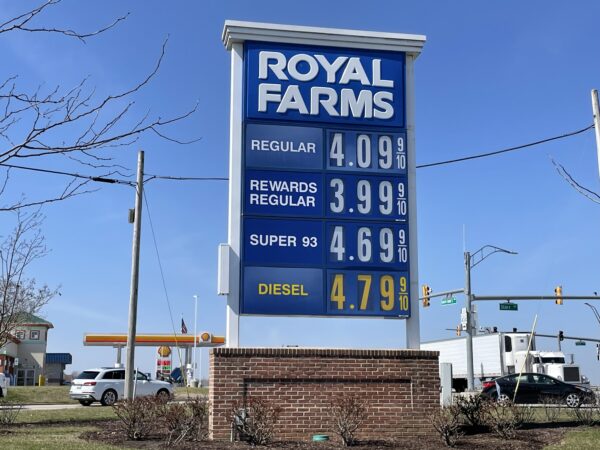 A gas station along Route 404 in Queen Anne on Friday. Photo by Bruce DePuyt.

“This 30-day gas tax suspension is a targeted response to extraordinary circumstances,” said House Speaker Adrienne A. Jones (D-Baltimore County), who joined Hogan and Senate President Bill Ferguson (D-Baltimore City) at the bill signing. “When we’re in session, it’s easy to get tunnel vision and get caught up in the minutiae of Maryland politics. But the dramatic spikes at the gas pump, at the grocery store and elsewhere are hard to ignore.”

The average price of a gallon of gas in Maryland is $4.17, according to AAA. Prices have dipped 14 cents per gallon over the past week, though they remain much higher than they were last month ($3.57 a gallon). A year ago the average price stood at $2.85 per gallon.

The comptroller’s office said consumers will save $93 million over the next four weeks, and Franchot predicted that motorists from neighboring states will come to Maryland to take advantage of lower prices.

Last week he called on the legislature to approve a 90-day tax holiday, and — with a nod to this year’s statewide elections — he said he expects lawmakers will return to Annapolis to extend the tax holiday. It is set to expire on April 16, five days after this year’s legislative session ends.

Because station owners pay the tax on fuel when they take delivery, the General Assembly incorporated an amendment proposed by the comptroller’s office to rebate them for taxes paid in recent days.

Franchot’s media availability took place shortly after the bill signing, which was held in the State House, about a block from his office. “I wasn’t invited” to the bill signing, he said with a smile, before adding, “No, I didn’t go.”

The comptroller later went to gas stations in Eastport and Silver Spring to talk with station owners and customers.

Editor’s Note: This story was updated to correct the location of gas stations visited by the comptroller.