The Maryland Senate passed an extensive climate change bill Monday night that would set the state on track to cut its greenhouse gas emissions to be net-zero by 2045, partly by requiring large buildings to reduce their energy usage.

The Senate passed the Climate Solutions Now Act of 2022 in a 32-15 party-line vote, with Republicans opposed. The bill is now headed to the House of Delegates, where lawmakers  have introduced their own set of companion bills instead of a single sweeping measure.

The Climate Solutions Now Act would set the statewide greenhouse gas emission reduction goal to 60% below 2006 levels by 2030, expand the state’s electrical vehicle fleet, direct millions of dollars to school systems to build net-zero schools and establish a “green bank” that would invest state funds into private projects that reduce gas emissions, among many other provisions.

Monday’s vote came after a marathon Senate floor session last week, during which Republicans attempted a slew of failed amendments.

During committee deliberations, Sen. Paul G. Pinsky (D-Prince George’s) cut the bill’s most far-reaching provisions, which would have required all new buildings to use electric power, rather than fossil fuels, to provide space and water heating by 2024.

“But it makes a very important step forward,” he added.

Before the bill passed on Monday, Republicans renewed their claims that the bill would increase energy cost savings, particularly for low- and moderate-income residents who live in multifamily buildings, and not move the needle much on global climate change.

“This is going a bridge too far, but in a way it’s going to a bridge to nowhere because there’s no benefit…to the overall climate crisis,” said Minority Whip Justin Ready (R-Carroll). “It’s just going to raise energy prices.”

Sen. Mary Beth Carozza (R-Lower Shore) asked for climate solutions that do not threaten jobs or energy reliability and affordability for Marylanders.

But Pinsky contended that moving away from fossil fuels will be cheaper for the state in the long-run and highlighted that the Maryland Commission on Climate Change, which includes five Cabinet secretaries from the Hogan administration, approved recommendations for an all-electric construction code in a 24-2 vote.

The bill now requires the Public Service Commission to determine if there is enough capacity within the state’s grid to support an all-electric building code in the future. It also would require buildings of 25,000 square feet or larger to reduce emissions by 30% of 2025 levels by 2035 and to net-zero by 2040. But it exempts private and public schools, agricultural buildings and historic buildings from the new standards.

Pinsky predicted that even if the Public Service Commission concludes after their study that the state’s electrical grid can handle an all-electric building code, utility companies will still oppose sweeping climate legislation.

“The gas industry poisoned the well with disinformation and put their profit margin over the interests of the state,” Pinsky told Maryland Matters. 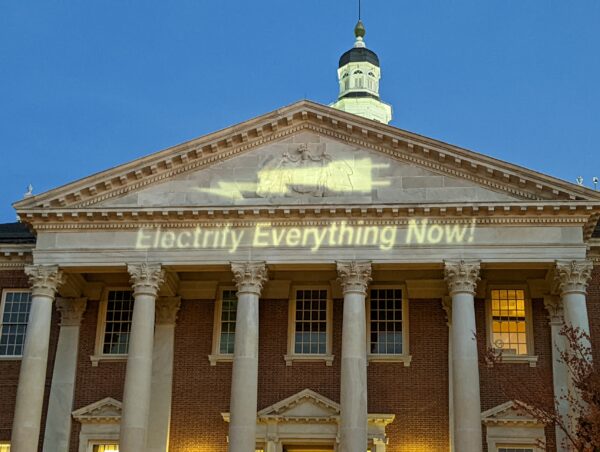 A group of environmental advocates projected “electrify everything now” onto the State House on Monday evening to urge senators to pass the Climate Solutions Now Act. Courtesy by Jamie Demarco of the Chesapeake Climate Action Network.

Before the Senate convened on Monday evening, a group of environmental advocates gathered on Lawyers’ Mall and projected the phrase “electrify everything now” with a picture of an electrical plug onto the State House to urge senators to pass the bill.

“What do we want?” Victoria Venable, the Maryland director of the Chesapeake Climate Action Network, asked through a megaphone as senators were walking from the Senate office buildings to the State House.

“Climate solutions!” the crowd yelled back.

“When do we want it?” Venable asked.

Josh Tulkin, the director of the Maryland Sierra Club, said that he was disappointed that the Senate passed the bill without an all-electric code for new buildings, which he said was essential for the state to meet its greenhouse gas reduction goals. “We will need to do it, and that delay is not helpful,” he said.

As the bill moves to the House of Delegates, Tulkin said he hopes lawmakers will amend the bill so that the Public Service Commission does not rely on analyses made by the utility companies about the state’s grid capacity. Instead, the Public Service Commission should rely on projections from third-party consultants, Tulkin said. “Utility companies should be providing information, answering questions, but not reaching conclusions.”

Emily Scarr, the Maryland director for Maryland Public Interest Research Group, said the bill “moves us in the right direction toward more efficient buildings powered by clean energy.” But she urged lawmakers to not invest any more in the state’s gas distribution network and argued it would be more expensive for Marylanders to rely on fossil fuel in the future.

“Decision-makers need to acknowledge that as Maryland moves away from fossil fuels, utilities will look to customers to cover the stranded costs of a gas infrastructure that will become increasingly useless,” she continued. “If regulators don’t recognize this moment, too many Marylanders will be trapped with the financial burden of ever increasing costs for outdated gas infrastructure.”