Led by Gov. Glenn Youngkin and the head of Transurban North America, Northern Virginia leaders celebrated the extension of privately-owned toll lanes along the Capital Beltway on Monday — an expansion that is expected to bring the firm’s signature lanes to within a few yards of the Commonwealth’s border with Maryland.

Construction of an additional 2.5 miles of “Express” lanes, which will carry traffic between the Dulles Toll Road and the American Legion Bridge, will begin in the coming weeks, with an expected completion date of 2025. Transurban already owns and operates 53 miles of toll lanes in Northern Virginia, with more planned along Interstate 95 south of Springfield.

Speaking to business and political leaders at a groundbreaking on the roof of a Fortune 100 bank, Youngkin (R) pointed to the cranes dotting the skyline in Tysons Corner, an economic hub that has long rivaled downtown Washington, D.C. for its size and clout.

He said “495 Next,” as the project is known, represented “a critically important project that’s uncorking the congestion in Northern Virginia.”

For the capital region to free itself from some of the nation’s worst traffic, Youngkin said, Maryland leaders must extend toll lanes across the bridge and into Montgomery County.

“We will see the benefits of ‘495 Next’ extend from Virginia into Maryland, but we need some help,” said Youngkin, who took office two months ago. “Yes, we’re going to take jobs from Maryland into Virginia. Yes, we’re going to compete to grow faster than Maryland. And yes, Gov. Hogan, we need you to finish your side of this project.”

His initial plan, unveiled in his first term, called for four privately-funded toll lanes along Interstate 270, the Beltway and the Baltimore-Washington Parkway, with the state’s concessionaire handling funding, design, construction and maintenance of all three roads. In exchange, Transurban would win the right to set toll rates and keep almost all of the revenue.

At the time, Hogan said using Maryland’s public-private partnership, or P3, law represented a win for both taxpayers and investors.

Since then, the plan has weathered intense opposition from Montgomery County residents, planners and political leaders — and it generated pushback from the capital area officials who steer transportation policy. In addition, the state’s selection of Accelerate Maryland Partners, a consortium headed by Transurban and another Australian firm, remains the subject of a legal challenge filed by a losing bidder.

To appease critics and satisfy a swing vote on the Board of Public Works, the state has pared back the plan significantly. The reworked strategy is to get a construction contract in place to rebuild the bridge and run toll lanes from the span and up I-270 to I-370 before Hogan’s term expires next January. 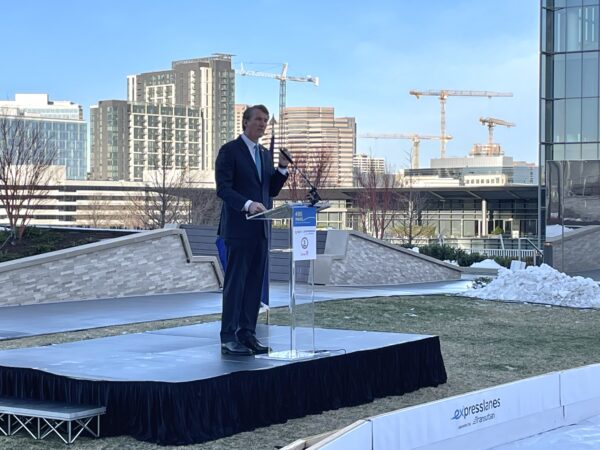 Virginia Gov. Glenn Youngkin (R) speaks at the groundbreaking for the “495 Next” toll lanes project on Monday in Tysons Corner. Photo by Bruce DePuyt.

“I speak with Gov. Hogan frequently about their side of this project and I can tell you they are committed to getting it done, to fully unlocking the 495 corridor,” Youngkin said.

“This is something we must do together and our administration is speaking with (our) Maryland counterparts all the time. And trust me, Gov. Hogan is tired of hearing from me.”

In 2019, Hogan and then-Virginia Gov. Ralph Northam (D) ceremoniously signed a placard reading “Capital Beltway Accord” at an appearance before the Greater Washington Board of Trade and the Greater Washington Partnership. Officials from both states have since referred to the accord but they refuse to make it public.

In a statement, Michael Ricci, a Hogan spokesman, praised Youngkin for his support of toll lanes and enhanced transit in the traffic-choked D.C. region.

“Governor Hogan clinched the Capital Beltway Accord with Governor Northam in 2019 that helped make this progress possible, and we’re happy to now have Governor Youngkin join this critical interstate partnership,” he said.

On Friday, the Maryland Transit Opportunities Coalition, a group that has vigorously opposed Hogan’s pursuit of toll lanes, unveiled a new website, OopsLanesMd.com, a domain that mocks the state’s rebranding for its P3 program, OpLanes Maryland.

The site is a compendium of grievances the group has leveled against the project, including the potential that tolls will spike when too many drivers attempt to use the lanes.

The site takes issue with Hogan claims that the lanes will be built at “no net cost” to the state, and it points to a “new bottleneck” along the inner-loop of the Beltway at Old Georgetown Road that the state’s own data suggests will be created when the first phase of Maryland’s project opens.

In an interview, Transurban North America President Pierce Coffee conceded that “where the project ends, there is a transition, just like anywhere where you have a merge point.”

She said the company has worked successfully in Virginia to smooth transitions from express lanes to free lanes. “What you to do is, you have to look operationally and (at) the physical infrastructure to see what you can do there to ease any merging.”

Coffee also expressed confidence in the procurement process that Maryland used in selecting Accelerate Maryland Partners over two other bidders.

“We believe that Maryland ran a robust procurement process and that we followed everything associated with that,” she said. “We hope to break ground with Gov. Hogan just like we did here today with Gov. Youngkin.”

Capital Express Mobility Partners, a consortium led by two Spanish firms, sued the Maryland Department of Transportation last year over its selection of AM Partners. Among their complaints: the departure of the winning bidder’s construction company mid-procurement.

Coffee said AM Partners has an “active” search for a replacement construction firm underway, with bids due this spring.