Standing outside Northeast Market, Baker (D) said he would impose a state of emergency immediately upon taking office next January, and he implored Hogan (R) to do so now.

“The governor today can declare a state of emergency and bring the resources in that the state has to bear,” Baker said. “He could do it this afternoon. He doesn’t need anybody’s permission.”

He said the state response would be much more robust if predominately white suburbs were seeing levels of bloodshed akin to Baltimore’s.

“If you had over 2,000 homicides over an eight-year period anywhere else, if this had been Howard County or Anne Arundel County or Montgomery County or any place else, if these were 2,000 white kids that had been killed, it would be an emergency.”

Under an emergency declaration, Baker said, state troopers could be assigned to handle routine patrols, direct traffic and respond to accidents, freeing city officers to be in the community. He also said it would open up the use of funds from other agencies to improve physical and mental health, boost job opportunities and help close unsolved homicides.

Baker is one of nine Democrats running to succeed the term-limited Hogan in the June 28 primary. A former two-term Prince George’s County executive, Baker has sought to rally support in the vote-rich city before, declaring in December that he would move the governor’s office to Baltimore when the legislature is not in session.

According to Open Baltimore, the city’s informational portal, there have been 4,171 crimes committed this year, roughly one every 21 minutes.

Hogan has repeatedly introduced measures to crack down on repeat offenders and has urged judges to impose tougher sentences on violent criminals. He has warred publicly with the city’s top prosecutor, who he has accused of failing to go after known criminals. And he has added $150 million to the state’s public safety budget as part of an initiative he likes to call “re-fund the police.”

Prince George’s has waged war on violent crime for decades, with mixed success. Baker told reporters that when 13 people were killed in a 13-day span early in his tenure, “we brought every facet of the government to bear on this problem.”

He said Hogan has yet to declare a state of emergency in Baltimore “because what they want to do is criticize.” 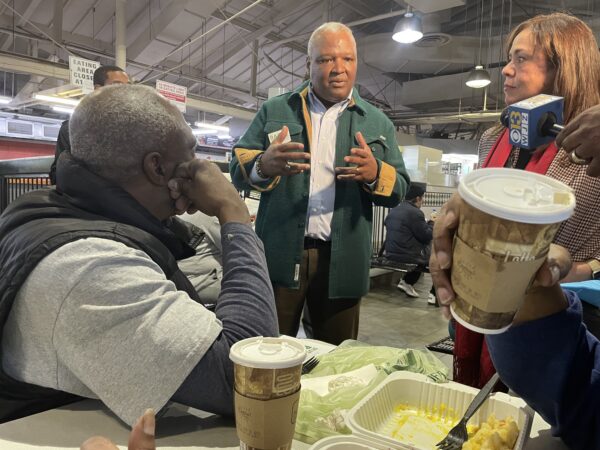 “Everyone in the General Assembly wouldn’t be putting in meaningless legislation, they’d actually be trying to solve the problem,” if mass murder was occurring in Howard or Anne Arundel, he said. “Why is it acceptable for this to happen in this, our (largest) city?”

Under the plan Baker unveiled on Thursday, Maryland would use state funds to fill vacancies in the city’s police force and provide financial incentives to officers who choose to live in the city and to military personnel who become cops.

“Those are the things that we can immediately do,” he said. “It is a crisis. We should treat it like a crisis.”