Local school districts would be allowed to decide whether students, staff and visitors must wear masks in school buildings under a proposal the Maryland State Board of Education approved Tuesday.

The board’s 12-2 vote to rescind its emergency regulation moves the final decision to a legislative committee responsible for reviewing state regulations.

Board members Holly Wilcox and Rachel McCusker voted against the proposal.

The Maryland General Assembly’s Joint Committee on Administrative, Executive and Legislative Review will make the final decision and has scheduled a virtual public hearing and vote on Friday, starting at 2:30 p.m.

Under the emergency regulation, local school systems have been allowed to lift masking rules only if they meet at least one of three conditions: if 80% of staff and students are fully vaccinated, if 80% of the full county population is fully vaccinated or if a county’s COVID-19 transmission rates are low or moderate for 14 consecutive days, as reported by the CDC.

The board of education passed that emergency regulation in December and the AELR committee approved it early last month.

Four of 24 local school systems — Anne Arundel, Frederick, Howard and Montgomery school districts — have already reached these metrics and are eligible to lift their mask mandates. Anne Arundel County public schools moved to an optional masking policy in school buildings last week but are still requiring masks on school buses due to a federal mandate.

State Board Vice President Charles Dashiell made the motion to rescind the state regulation.

“Given the improving health metrics, it is appropriate for the local boards of education to make the decisions which they feel are in the best interest of students they serve in providing them a safe in-person learning environment,” he said.

But McCusker, the parent representative on the board, said she was concerned with the new COVID-19 variant, called omicron BA.2.

It would be “prudent” to delay this decision for a couple of weeks, she continued. McCusker stressed that she understood “where parents are coming from,” but remained concerned that “we’re going to lose children from the physical classrooms to home and hospital teaching or to a mass exodus to virtual programs.”

However, it is unclear whether the General Assembly’s regulatory review committee will make a decision to rescind the emergency mask policy on March 1 as the board proposed. AELR has the discretion to determine the effective date of the proposal if they approve it, according to Elliott Schoen, legal counsel for the Maryland State Department of Education.

Another COVID-19 surge could qualify as a new emergency and move the board to pass another emergency regulation based on new circumstances, according to Clarence Crawford, president of the state school board.

This state board vote came after support from State Superintendent Mohammed Choudhury.

“The conditions are better — there’s more testing, there’s more vaccines that are readily available,” he said. “It’s time to give it back to local control so they can make the responsible decision.”

But Choudhury said he does not regret the decision to mandate masks in school buildings at the start of the school year, arguing that it was the reason Maryland public schools have been able to have largely undisrupted in-person learning. “I would go back and I would do it again because it did what it needed to do,” he said.

Tuesday’s vote comes after Gov. Lawrence J. Hogan Jr. (R) and Republican lawmakers asked the state board to lift its mask mandate earlier this month. In a statement following the board’s vote, Hogan thanked the panel for its decision and said it “aligns with the data and the science.”

Last week, Hogan issued new guidance, effective Tuesday, which removed a requirement that employees and visitors in state buildings wear face masks. That guidance includes the Maryland State Department of Education, and some who testified in-person and a few state board members were not wearing masks on Tuesday.

Cheryl Bost, president of the Maryland State Education Association, called the state board’s decision Tuesday “premature,” as it goes ahead of guidance from the Centers for Disease Control and Prevention, which has recommended universal indoor masking in school buildings since its last update in January.

Bost said educators have been fatigued by being enforcers of the mask mandate, but they understand it is for the health and safety of students.

“We hope that [the AELR committee] will put health and safety first, provide virtual opportunities for students who can’t be in classrooms unmasked, and provide possible alternate job sites for educators,” she said.

Before the board’s vote, parents testified about the social and emotional difficulties their children have felt under the school mask requirement. 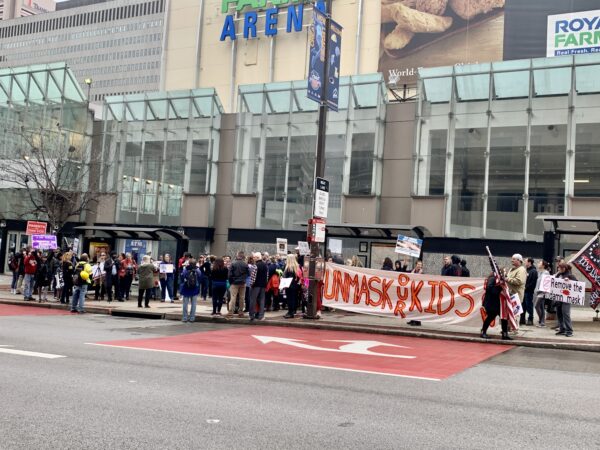 People rallied in front of the State Department of Education on Tuesday, calling for the State Board of Education to lift a mask mandate in Maryland public schools. Photo by Elizabeth Shwe.

Under the current emergency regulation, “some districts will be able to enjoy regular school and others will be denied that opportunity because of where they live,” which is discriminatory and exacerbates inequality, Jamie Brennan, a Frederick County parent, told the state board. She said she moved her child to a private school with a mask-optional policy.

From the seventh floor of the State Department of Education building where the state board met, shouts could be heard from several dozen people standing across the street and calling for the school mask mandate to be rescinded.

Under a drizzle of rain, people held signs that said “unmask our kids” and “my child, my choice.”

Kit Hart, who is a part of a group called “Moms for Liberty” and one of the organizers of Tuesday’s rally, said that she pulled her children out of public school in Carroll County after one suffered from anxiety and developmental delays because of the mask mandate. She called the school mask mandate “unlawful” and said that “parents are the people who know the individual needs of their own children.”

Opinion: For whom will the back-to-school bells toll? State Superintendent Choudhury holds the key

With mask mandates largely lifted in schools and a growing public consensus around a return to a pre-pandemic normal, Maryland’s State Board of Education…

Scores on standardized academic proficiency tests taken during the COVID-19 pandemic have dramatically fallen since Maryland students were last tested in spring 2019. Only…