Leaders of several progressive organizations urged state elections officials on Monday to consider blocking Republican gubernatorial hopeful Daniel L. Cox from the ballot, arguing that his actions on Jan. 6 might make him ineligible to run for office ever again.

A state delegate who represents portions of Frederick and Carroll counties, Cox helped arrange buses to carry supporters of former president Donald Trump to the “Stop the Steal” rally in Washington, D.C. Many of the people who attended the rally, which featured the then-president, forced their way into the U.S. Capitol in an attempt to block Congress’s certification of the 2020 election results.

At the height of the melee, with members of Congress and then-Vice President Mike Pence being rushed to secure locations in the capitol complex, Cox tweeted “Pence is a traitor.”

“We’re not saying for certain that Dan Cox is an insurrectionist, but there’s much more than enough evidence to conduct a full-scale investigation,” said Hal Ginsberg, national coordinator for the group Our Revolution. “This is a crucial issue for our democracy.”

“There’s too much smoke there not to look for fire,” he added. 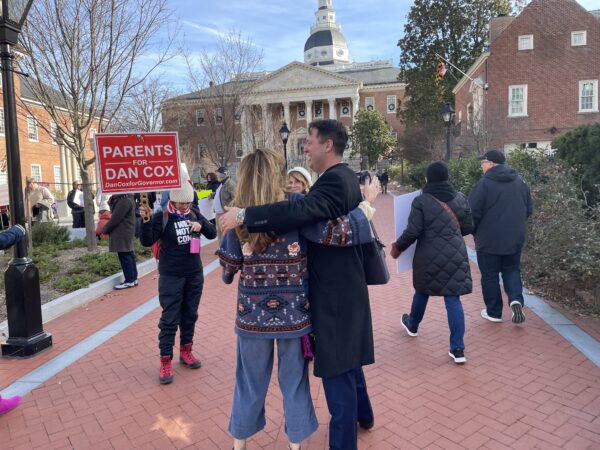 Gubernatorial hopeful Dan Cox, a member of the House of Delegates from Frederick, greets supporters at a rally against vaccine mandates outside the State House on Jan. 12. Photo by Bruce DePuyt.

A letter that representatives from Our Revolution and other groups hand-delivered to the Board of Elections cited the Section 3 of the 14th Amendment to the Constitution, which bars those who “have engaged in insurrection or rebellion” against the nation from serving in state or federal office.

The Maryland Constitution also bans anyone “who is a member of an organization that advocates the overthrow of the Government of the United States or of the State of Maryland through force or violence” from holding public office.

Cox later denounced “mob violence” in a statement after the riot and said that he attended the event where Trump addressed rally attendees, but didn’t take part in the violence at the U.S. Capitol.

“We are reaching out because we were frightened and appalled by the actions of State Delegate Dan Cox in the days leading up to and during the January 6th insurrection at the US Capitol,” Our Revolution Maryland Chair Chrissy Holt wrote in a letter to Maryland Elections Administrator Linda H. Lamone.

Cox did not immediately respond to requests for comment on Tuesday afternoon.

The groups held a rally in the Board of Elections’ Annapolis headquarters building before delivering their letter. About 20 people chanted “U.S. Constitution rocks, now is the time to investigate Cox,” and “Hey hey, ho ho, insurrectionists have got to go.”

Cox is one of four Republicans who have filed or launched campaigns for governor ahead of the June 28 primary. He’s running against former state commerce secretary Kelly Schulz, anti-tax advocate Robin Ficker and attorney Joseph Werner. The candidate filing deadline is March 22.

Jared DeMarinis, the director of the State Board of Elections’ Candidacy and Campaign Finance Division, said the board had received the letter “and will respond accordingly.”

Bennett Leckrone contributed to this report.

Editor’s Note: This story was updated to remove an incorrect reference to Maryland’s primary election date. The primary is scheduled for June 28.