Senate leadership from both parties called for bipartisanship Thursday as they proposed their legislative solutions to Maryland’s rising crime rate.

But bipartisanship may be hard to come by this session. Members of the minority party criticized Democratic tactics while also asking their colleagues to reach across the aisle on some priorities.

“That was two years ago, and we’re still dealing with the same issues,” Simonaire said.

“Let’s be real with the public: Democrats control Annapolis with their supermajority — they own the crime policies,” he continued. “They have tried their ‘woke,’ progressive ideas and their policies have failed miserably.”

Members and supporters of the majority party highlighted their goal to cease the flow of unregistered, unserialized ghost guns into the state, proposing a ban on the sale or possession of them.

“They’re made from kits, they’re sold in stores, they’re sold widely over the internet and they are an increasing threat to public safety,” Attorney General Brian E. Frosh (D) said.

The seizure of ghost guns by police has increased dramatically in recent years.

Frosh said that Baltimore police are on track to recover 700 unserialized guns by the end of 2022.

Montgomery County County Police Chief Marcus Jones expressed concern about kids getting their hands on these firearms. He said that five ghost guns have been discovered on Montgomery County school grounds in 2022 — one was an assault-style rifle. And late last month, a 17-year-old Magruder High School student shot his 15-year-old classmate with a ghost gun, police said.

According to Jones, the teen purchased the gun online and had it sent to his home. It arrived in three separate packages, no age confirmation or background check required.

“The adage is: No one knows you’re a dog on the internet,” Frosh said.

Asked about the ghost gun legislation, Sen. Michael J. Hough (R-Frederick), a member of the Senate Judicial Proceedings Committee, said Republicans will “look at it.”

Gov. Lawrence J. Hogan Jr. (R) has introduced a package of bills to address crime in the state, including legislation to require that judicial sentencing information for violent crimes be tracked and published.

The governor called on lawmakers to pass the bill, also known as the Judicial Transparency Act, during the 2021 special legislative session

Neither chamber took up the measure or another bill he introduced to impose harsher sentences on people who have been repeatedly convicted of firearms offenses, the Violent Firearms Offender Act.

The governor reintroduced both in 2022.

Simonaire said Republicans are “completely willing to work with the Democrats” in regard to judicial transparency. 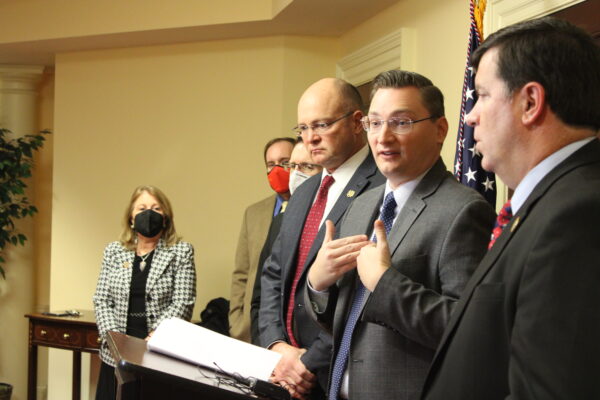 Sen. Michael J. Hough (R-Frederick) denounces Democrats for introducing legislation that he says focuses on “the criminal being the victim” during a Thursday press conference in Annapolis. Photo by Hannah Gaskill.

Hough said that the Senate has passed amended versions of the Violent Firearms Offender Act two years in a row on a bipartisan basis. In 2020 the bill died in the House chamber and it was taken up too late during the 2021 session to move forward.

“We’ve passed this twice now in the Senate and … the great question to leadership is: Why is this not moved already?” he said.

Hough and his fellow caucus members railed against the majority party, saying that legislation introduced in the past few sessions has focused on “the criminal being the victim.”

They found a 2022 juvenile justice reform bill to have all minors enter the justice system through juvenile courts — regardless of their alleged offense — particularly disturbing.

“We spent three hours talking about that — the injustice to juvenile murderers that’s being done by our state,” Hough said, incredulously. “That’s the attitude down here.”