The Maryland Board of Public Works approved dozens of contracts worth several hundred millions of dollars on Wednesday. Just as they do at every meeting.

What everyone who participated in the meeting most wanted to talk about was the contribution that Treasurer Nancy K. Kopp made to the state during her nearly half-century career. Wednesday’s meeting was the 78-year-old Democrat’s final BPW session. 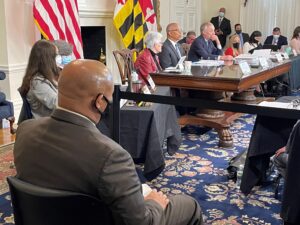 She decided in October to step down at year’s end. During the legislature’s special session last week, Del. Dereck E. Davis (D-Prince George’s), the chairman of the House Economic Matters committee, was chosen to take her place.

In addition to the gifts and flowers, nearly everyone who appeared before the panel praised Kopp for the way she conducted herself during 27 years as a member of the House of Delegates and nearly 20 more as treasurer.

“Thank you for being the gracious person that you are,” said David Brinkley, head of the Department of Management and Budget. “We’ve agreed and disagreed on many, many issues. But certainly you’re a quality person.”

“It’s essential that I acknowledge your leadership as a woman in Maryland and the extreme competence that you project,” said Suzanne Dorsey, assistant secretary of the Maryland Department of the Environment. “We appreciate so much your leadership and your example of the grace with which you project that competence. Thank you.”

“You always served as a role model,” said Housing and Community Development Secretary Kenneth C. Holt. “Your legacy to me is how much you care for others.”

Thomas P. Hickey, a top university procurement official, noted that Kopp served as vice-chair of a commission that “created the modern University System of Maryland … We’re thankful for your leadership and support of higher education.”

Despite the praise, Kopp acted as she normally does — questioning contracts, speaking out on behalf of climate change, and fretting about the “brain drain” brought on by retirements in state government, which she said has “always” been “a serious issue” but now is “reaching a critical stage.” She beseeched those in attendance to promote staff people into leadership positions wherever possible.

She and Franchot teamed up to force the Department of General Services to withdraw a contract they felt had not been prepared properly.

Sitting a few feet away from Kopp for the entire meeting, soaking up the scene, was Davis, her successor. He will be sworn in on Friday and has been shadowing Kopp all week.

“This is a lot to learn and I wanted to be as prepared and as ready as I could possibly be,” Davis said. “They have a very big job that they do very well. They’ve been incredibly generous with their time and assistance. I’m anxious to get started.”

As the gifts and tributes piled up, Kopp joked that “I should have done this earlier!”

In fact, it’s not altogether clear whether her decision to retire was her own — or whether she was nudged aside by Speaker Adrienne A. Jones (D-Baltimore County).

Kopp’s departure — 50 years after she arrived as a staffer working for the Montgomery County House delegation — comes as other longtime delegates see their roles diminished, including Anne Kaiser (D-Montgomery) and Kathleen Dumais (D-Montgomery). Kaiser said she gave up a key committee post to spend more time with family; Dumais saw the writing on the wall, a friend said, and sought a judgeship.

Kopp said she extracted a commitment from Davis to press environmental issues at every opportunity.

In an interview, she said she’s thinking about following in the footsteps of Evelyn Y. Davis, who gained notoriety by purchasing just enough shares of company stock to be able to hector CEOs at shareholder meetings.

“I find that idea more and more attractive,” Kopp said. “The gap between the rich and the rest is growing very quickly — and I think that’s a serious problem for America.”